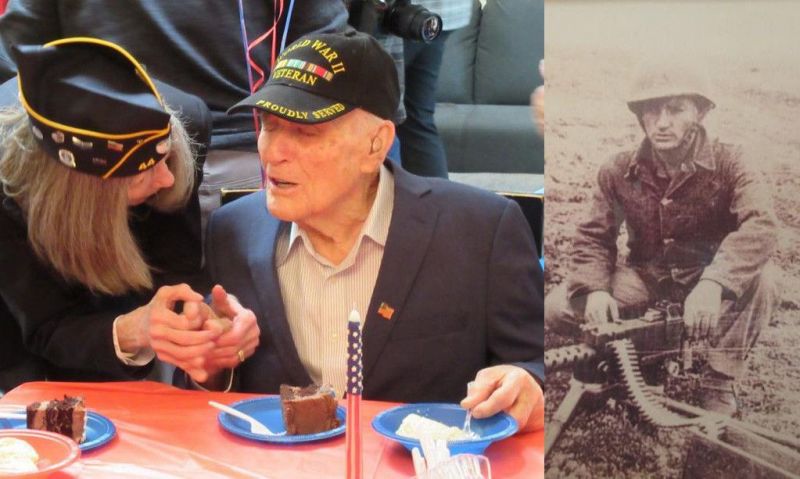 William "Lucky" Mullins turns 103 on May 17. As the oldest living World War II veteran of American Legion Post 44 in Ridgefield, Wash., members of the post and district surprised Mullins May 4 at the assisted living facility where he resides to celebrate his birthday.

The celebration was early because Mullins will be riding in a parade as the grand marshal “in honor of his birthday and service to our great country,” said Jen McDonnell, 5th District commander, who presented Mullins with a U.S. flag folded in a wooden case. “He is one of the sweetest and most honorable men you will ever meet.”

The birthday celebration was attended by Post 44 members, including Judith Wyatt who helped organize the event, as well as Mullins’ daughters, Jaylene Mullins and Cindy Richert. The party included decorations, singing, birthday cake and ice cream. “Lucky is blind, and his hearing is impaired, but with family by his side, he thoroughly enjoyed this special day in his honor.”

Mullins served in the U.S. Army from 1940-45 and is decorated with the American Defense Service Medal, Asiatic Pacific Service Medal, European African Middle Eastern Service Medal and Good Conduct Medal, Wyatt said. She shared that Mullins was a guard of about 100 German POWs during the war at a castle that overlooked the Rhine River where he would often take the prisoners to swim. “Lucky, being the guy that he is, he never lost sight of where he came from and never lost his compassion for other people. It didn’t matter if they were German prisoners of war.”

After the war, Mullins married his late wife of 71 years, Marvelyn, and they had four children. He volunteered at the Roseburg VA Medical Center in Oregon where he was “passionate about helping and spending time with other veterans,” Wyatt said. “When asked about his life or military service, with a smile he responds, ‘I have had a good life and am proud to have served my country.’

“As the coordinator of this event, I must admit this was one of the most significant times in my life,” Wyatt added. “I was truly honored to be a part of Lucky's celebration. Spending precious time with him and his family was truly an experience I will never forget.

“Post 44 would like to say, ‘Happy Birthday Lucky. You are our treasure, and we thank you for your service.’”