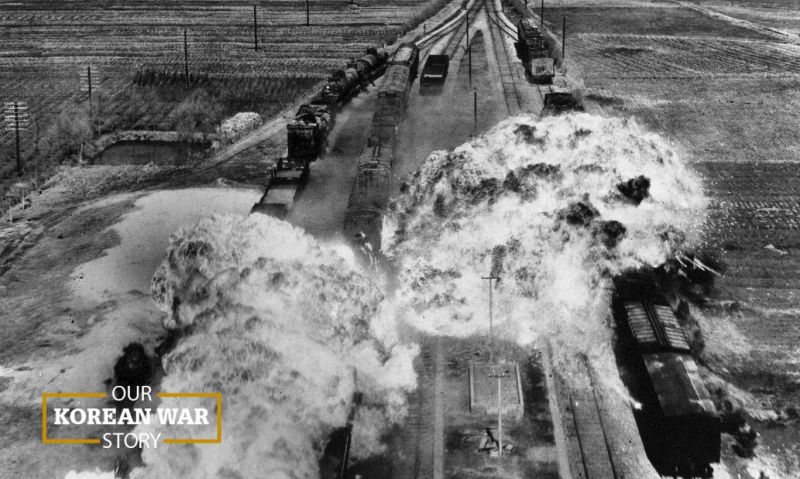 While trains were used to transport U.S. soldiers and their equipment during the Korean War, trains in North Korea were targets of attack by U.S. and other U.N. forces. Here, U.S. forces target rail cars south of Wonsan, North Korea, an east coast port city.

The early 1950s dichotomy was clear and emotionally stated in the February 1952 issue of The American Legion Magazine.

A Marine who had just returned from combat wrote that “Americans in Korea have been double-crossed by Americans in the United States. And some of us who have come back from that peninsula of misery are mighty ashamed of the home folks.”

Opposite that essay by James C. Jones Jr. appeared the heart-wrenching account of Ruby Peeler. Her article: “My Husband is Missing in Action in Korea.”

Both pieces stood in contrast to the “Happy Days” image of the nation at that time. “Nearly everyone here is fat,” Jones Jr. wrote. “Despite all the bellyaching about high prices and high taxes, it is quite apparent that nobody is starving, that millions of television aerials stud the house tops, that a vast number of the cars on the streets are sleek new models and that most of the home-fronters are so busily occupied tending their own gardens that they seldom have time to drop in at a blood center to squeeze off a pint for the guy who is dribbling his away in a cruddy rice paddy.”

Less than seven years removed from the end of World War II, the American public was perceived as disinterested by many of the Korean War combat theater. Jones Jr., who had also served during World War II, described a very different welcome when he returned from Korea. “Precious little pride accompanies the current homecoming,” he wrote.

He added that the “tap was shut off” on U.S. military support after four months of fighting. “Morale,” Jones Jr. wrote, “could never be strong under such circumstances, and mustering up courage to attack that next hill was excruciatingly difficult.”

Peeler’s sidebar to Jones Jr.’s essay described the anguish faced by “we wives of those who are Missing in Action in Korea, living lives of nightmarish hopes and frustrations.”

As much of the nation was building suburbia and pursuing the Great American Dream, Peeler’s nights were haunted. “Some of us dream,” she wrote. “Not good dreams, as we’d wish. Sleep with pleasant dreams would help. But the dreams we have are too deeply permeated with the hopelessness, helplessness and brutality of the situation to give sufficient rest to body and soul.”

She wrote of rising social concerns of the time – organized crime and illegal drugs included – “that destroys all that for which men are dying. Then, when people stop to think, they ask, ‘What are our troops doing in Korea anyway?’”

She added that as time passed with no word about her husband, she maintained hope for an end to the fighting. “Some day, if you last long enough, physically, spiritually and mentally … you may read where there has been a truce signed in Korea, a cease fire, exchange of prisoners. Then, you will know!”

Jones Jr. made the point that the Korean War hit 100,000 U.S. casualties three months earlier than World War II, and “the number of U.S. dead was more than twice the number of killed-in-actions for the same period in WWII.”

And yet, he wrote, the Korean War simply did not get the press of World War II. An important 1,000-casualty battle in Korea, he pointed out, would be “jammed into an insignificant corner 15 or 20 pages back.”

The writer concluded that the main development the Korean War veteran could hope for after a war most of America failed to adequately recognize was “the armistice and its after-effect.”