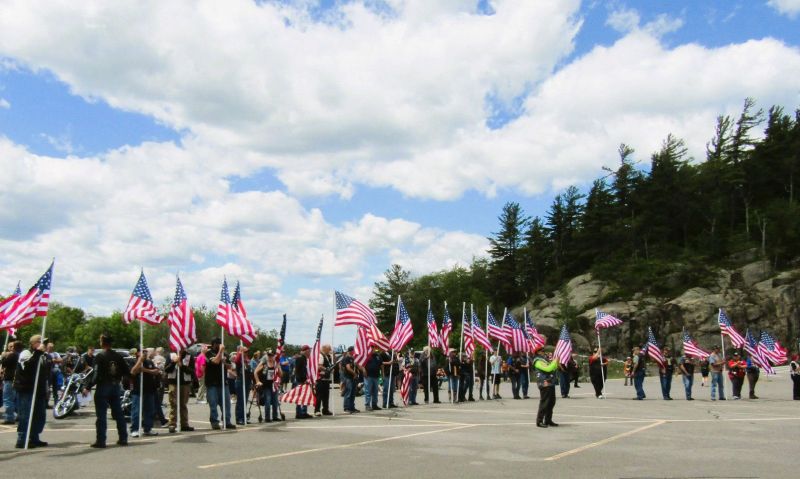 COVID-19 cancelled the event in 2020, and in early 2021 Waterston passed away. But thanks to dedicated Legionnaires, the event was back on in 2021 and then saw attendance grow during this year’s event, the 53rd such ceremony, on June 5.

Around 65 people attended this year’s POW-MIA ceremony, which was organized by current Post 629 Commander Paul Sears, an American Legion Rider with Chapter 323 in Granville, N.Y., and the chaplain for the Warren County American Legion.

“(Waterston) had been carrying the torch for this service. I don’t know how many years she did it … but she put her heart and soul into this more than words can say,” said Sears, who spent 22 years in the U.S. Army, with deployments to Kuwait in 2003 and Iraq in 2009. “I think that if we had let last year and this year go by (without a ceremony), I think our ceremony would have never been able to be rekindled again.”

Sears said he tried to follow Waterston’s example in organizing the event this year, noting “I kind of leaned on all of my peers and said, ‘Who can I call? Who can we get to come to this event? Who can help us remember the POWs and the MIAs?’”

Sears reached out to other American Legion Riders chapters, and other motorcycle groups and veterans organizations. And more than 60 people showed up for the ceremony. Members of the Patriot Guard Riders of New York attended and provided a flag line. The Johnsburg Central School band played service songs from each military branch, while the school’s Pop Singers performed the national anthem. And American Legion Post 374 in Lake George provided and hosted a meal following the ceremony.

Warren County American Legion Commander Donald Keenan spoke during the event, saying, “We’re here to celebrate POWs/MIAs and they all deserve our attention. To date, there are 83,114 Americans still missing and unaccounted for. We raise and lower the flag in honor of them in our continued hope that more will be found and returned home.”

In addition to serving as an inspiration to her fellow Legionnaires, Waterston’s passion for U.S. POWs and MIAs trickled down to her family. While a student at a SUNY Adirondack, Waterston’s granddaughter Mackenzie Waterston volunteered with the nonprofit Kuentai-USA to assist in the recovery of U.S. remains on the island of Saipan.

“I think that Mackenzie kind of felt the same way I did and wanted to support her grandmother,” Sears said. “For me, I think this is important because of the families that are out there that never got closure if their family member didn’t come home. So I am kind of carrying Terry’s legacy now. This was her love. Their remains have to come home, and we always have to keep looking and always have to keep remembering.”