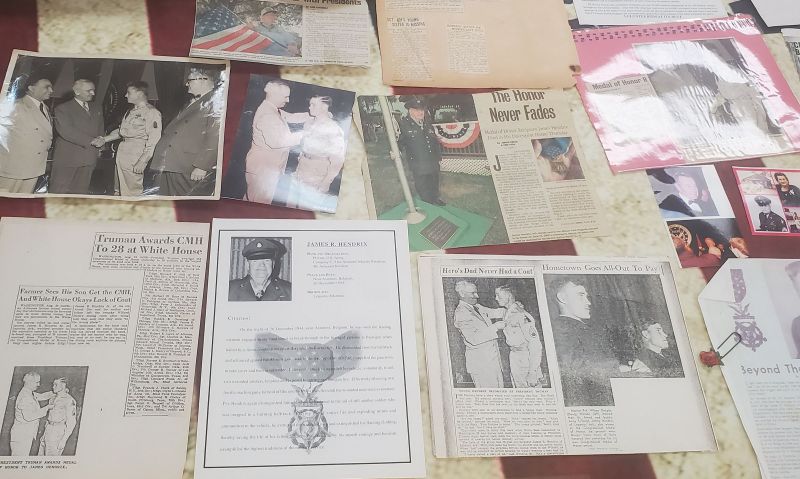 A storage unit auction resulted in a Florida man discovering a box of items belonging to a late Medal of Honor recipient. Among the items were photos of U.S. Army Master Sgt. James Hendrix receiving the highest military honor from President Harry S. Truman for his heroic actions on Dec. 26, 1944, during the Battle of the Bulge.

The gentleman wanted to return the items to the family of Hendrix, who passed away in 2002, so he looked to American Legion Post 69 in Avon Park, Fla., for assistance. Within two days, Post Historian Renee Rescigno found one of his granddaughters through Facebook. And on July 16, the items were returned to Hendrix’s sister and three of his daughters during a ceremony at Post 69.

“Everybody was just in tears,” Rescigno said. “His daughters were so happy to get everything back. I don’t think there was a dry eye in the group,” which included newly elected Department of Florida Commander Eunice Butts and Department Auxiliary President Jane Hardacre.

How the items were in the storage unit and lost is unknown. But what matters is that they are back to a thankful family.

“The granddaughter has since responded to me and was like, ‘We are so grateful that you got everything back to us,’” Rescigno said. “I told her, ‘Your aunts and your mom will always have a place in our Legion.’ That will be a home for them. It was a neat thing for us to do.”

Besides photos, the box also contained newspaper clippings detailing the heroic actions of Hendrix in World War II. One newspaper clipping found in the box said Hendrix “knocked out a German 99, two machine gun nests, captured 13 German prisoners, and rescued one (U.S.) soldier from a burning half-track and two from a blazing tank while under heavy machine gun fire.”

“It was unbelievable,” said Larry Roberts, American Legion Department of Florida VA Entitlements chairman, of the story the box told of Hendrix. “Batman is not a superhero. This guy was a superhero.”

During the ceremony, Post 69 played a seven-minute video of Hendrix recounting his story while wearing the Medal of Honor. At 20 years old, Hendrix was presented the Medal of Honor from Truman at the White House on Aug. 23, 1945.

“On the night of 26 December 1944, near Assenois, Belgium, he was with the leading element engaged in the final thrust to break through to the besieged garrison at Bastogne when halted by a fierce combination of artillery and small arms fire. He dismounted from his half-track and advanced against two 88mm. guns, and, by the ferocity of his rifle fire, compelled the gun crews to take cover and then to surrender. Later in the attack he again left his vehicle, voluntarily, to aid 2 wounded soldiers, helpless and exposed to intense machinegun fire. Effectively silencing 2 hostile machineguns, he held off the enemy by his own fire until the wounded men were evacuated. Pvt. Hendrix again distinguished himself when he hastened to the aid of still another soldier who was trapped in a burning half-track. Braving enemy sniper fire and exploding mines and ammunition in the vehicle, he extricated the wounded man and extinguished his flaming clothing, thereby saving the life of his fellow soldier. Pvt. Hendrix, by his superb courage and heroism, exemplified the highest traditions of the military service.”

Hendrix later served in the Korean War as a paratrooper before retiring from the Army in 1966. He resided in Davenport, Fla., where he died Nov. 19, 2002, from cancer at age 77.

The photos and newspaper clippings of Hendrix were displayed on a table resembling the American flag for family members and others at Post 69 to see. “It brought tears to my eyes,” Hendrix’s sister Zora Gibson said to The News Leader. “I miss him.”