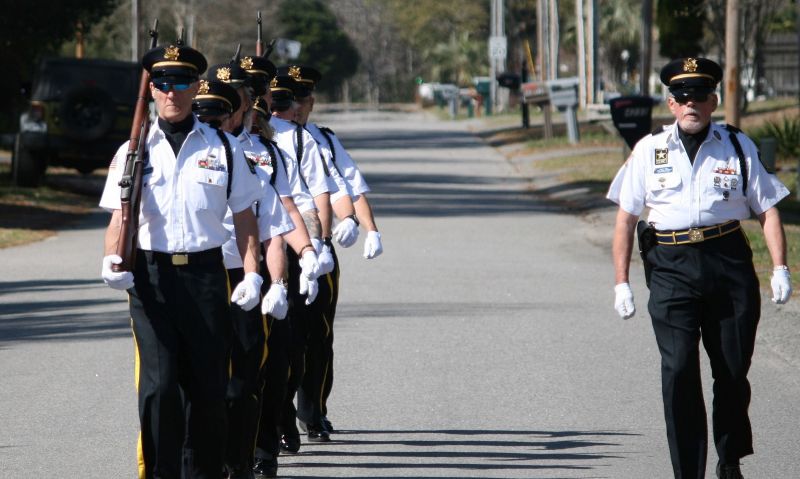 The color/honor guards of North Strand American Legion Post 186 in Little River, S.C., have been accepted for advanced training with the 3rd U.S. Infantry Regiment, traditionally known as the “Old Guard” and the oldest active-duty infantry unit in the Army, serving since 1784. In addition to protecting the president of the United States, members of the Old Guard stand watch over the Tomb of the Unknown Soldier at Arlington National Cemetery – 24 hours a day, 365 days a year.

According to guard captain Carl MacLeod, the training will “help to sharpen our skills to provide a moving tribute of lasting importance to the veteran’s family on behalf of the president of the United States, the veteran's branch of service and a grateful nation for their honorable and faithful service to our country.”

Between June 2021 and June 2022, the team volunteered more than 2,000 hours, plus more than 600 between June and the beginning of August; it has been active “for years,” MacLeod says. As part of a recognized, chartered post, the team was already eligible to receive equipment from the Department of Defense to use in ceremonies. Both elements helped in the application process, as did the assistance of Sen. Tim Scott (R-S.C.), who connected them to Arlington.

The team will be trained on casket-bearing, firing party, flag-folding and color guard, followed by visits to the caisson, the Tomb and other areas within the cemetery. MacLeod’s expectation is that the team will be able to fill in when DoD cannot supply the personnel.

The 22 team members and their spouses will travel to Arlington, Va., in mid-September; they are working on fundraising for travel and lodging expenses. For more information on the process, contact MacLeod, at 1SGMacLeod@gmail.com.