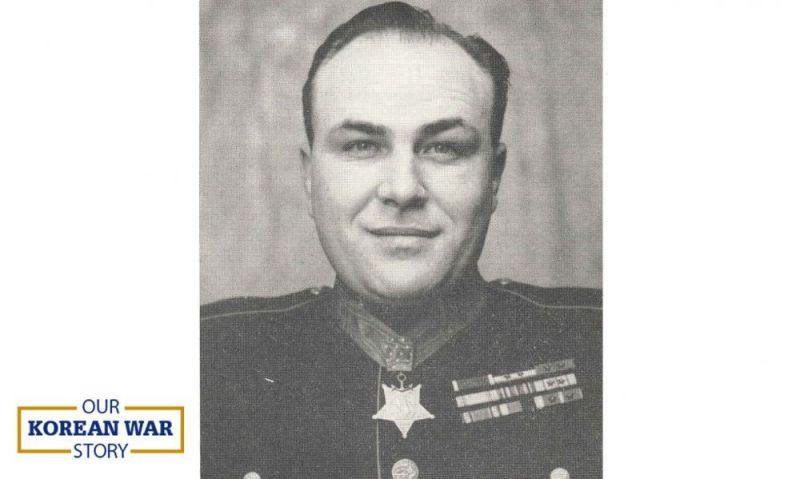 Robert S. Kennemore, a native of Greenville, S.C., enlisted in the U.S. Marine Corps in 1940, a year and a half before the United States entered World War II. He fought with the 1st Marine Division at Guadalcanal and elsewhere in the Pacific Theater before returning stateside for duty at Camp Pendleton, Calif., Klamath Falls, Ore., and Naval Air Station Boca Chica, Fla. After the war, he continued serving, at the New York headquarters of the 3rd Marine Corps Reserve District.

In September 1950, the staff sergeant deployed with the 7th Marines, 1st Marine Division, to Korea. There, he served in the battle to regain Seoul, and later led a machine-gun unit near the Chosin Reservoir. In November, his war would come to an end there.

He and two other Marines were surrounded by enemy forces, hunkered down in a strip trench when grenades started rolling into their position. Staff Sgt. Kennemore had suddenly assumed leadership of the unit when their company commander was wounded. He was able to grab the first grenade and throw it out of the trench before it detonated. When the second came in, he knelt down and covered it with his foot. The explosion took both of his legs and saved the lives of his fellow Marines.

According to his Medal of Honor citation, presented on Nov. 24, 1952, by President Harry Truman: “in the face of almost certain death, (he) personally absorbed the full force of the explosion to prevent injury to his fellow Marines. By his indomitable courage, outstanding leadership and selfless efforts on behalf of his comrades, Staff Sgt. Kennemore was greatly instrumental in driving the enemy from the area and upheld the highest traditions of the U.S. Naval Service.”

Kennemore had spent over a year at the U.S. Naval Hospital in Oakland, Calif., where he became a member of American Legion Post 5. The April 1953 American Legion Magazine reported that Kennemore “was cited as this year’s outstanding member of Oakland Post (5). He was received at the post and escorted by a guard of honor of 20 past commanders, headed by Captain W.J. Peterson, first post commander in 1919. Life membership has been voted … (to be) presented at a community-wide testimonial dinner.”

The war hero passed away in Oakland in 1989, but he was not forgotten.

At a ceremony to dedicate a new Korean War memorial Aug. 1, 2016, at the Presidio National Cemetery in San Francisco, Kennemore was remembered by Denny Weisgerber, a combat-decorated Korean War gunnery sergeant.

“This is a great day,” said Weisgerber, a member of American Legion Post 546 in Santa Clara, Calif. “It’s a beautiful day. It’s a beautiful sight. This monument faces right toward the 38th parallel. It’s a great and glorious day for the Korean War veterans of the United States. This is the best Korean War memorial in the U.S. And it’s the only major one on the West Coast.”

On that day, Weisgerber paid tribute once more to Kennemore, who is buried at the national cemetery there.

“I’ll be thinking of a lot of guys,” Weisgerber said. “I have a good friend who is buried out here, Medal of Honor recipient Staff Sgt. Robert Kennemore. He and I were in the hospital together. He’s laid to rest right behind me. I think about him a lot. And I think of those who didn’t make it back – not from the battle itself but from the perspective of such young lives. We were only between 18 and 25. It was a hot and heavy deal. A lot of people call it the ‘Forgotten War.’ It will never be forgotten by us.”