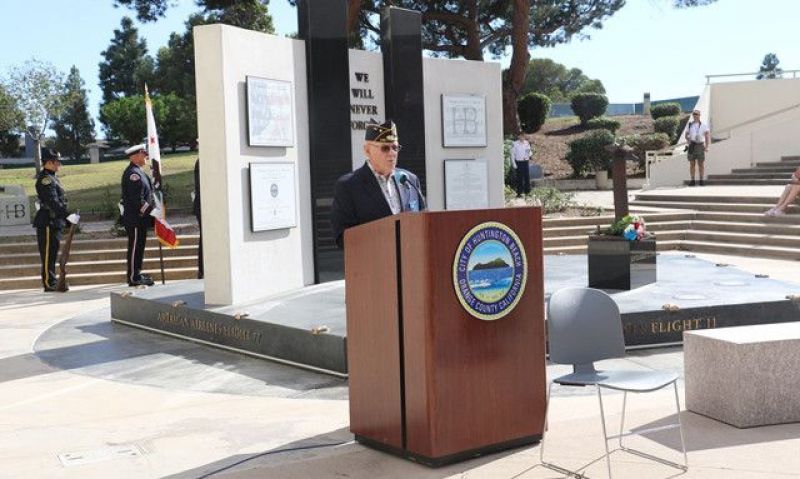 American Legion Post 166 in Goose Creek, S.C., was one of 75 sites chosen across the country for the 9/11 Flag Day Across America on Sept. 11. Each site chosen was responsible for honoring 65 lives lost on Sept. 11, 2001. Post 166 Second Vice Commander L. David Coates said the event was attended by active-duty military, law enforcement, several patriotic motorcycle groups that included American Legion Riders and the Patriot Guard, fire department, school groups, civic groups and Scout troops. The 65 names were read with a tolling of a bell. The Honor Flag, which lists every person that died 21 years ago from the terrorist attacks, was escorted by a parade of law enforcement and motorcyclists onto the post property.

“As it turned onto the street of the Legion (post), it passed under an American flag suspended from a fire department tower truck as a sign of respect,” Coates said. “At the front entrance to the Legion building, it was met by the honor guard of American Legion Post 166 and a flag line made up of bikers. As they pulled up, there were so many motorcycles it made the entire building vibrate from the rumble.”

The post honor guard received the banner and entered the building to start the 9/11 ceremony. Coates shared that the flag bearer was Air Force veteran and Legionnaire David Perez, “who at the time of the attack was a deputy sheriff in New York City and was boots on the ground shortly after the buildings fell.”

The following American Legion posts held remembrance ceremonies or participated in their community event. The American Legion wants to hear how your post remembered the 21st anniversary of Sept. 11. Please share your stories and photos on Legiontown.

American Legion Post 99 in Foley hosted a 9/11 remembrance ceremony that started with a breakfast followed by a flag retirement ceremony for those who lost their lives on Sept. 11, 2001.

American Legion Post 91 in Beebe held its first 9/11 remembrance ceremony. The post honor guard rendered honors with a rifle salute and on display was a framed frottage (pencil rubbed copy) of local hero Sgt. Jason Swindle’s name from the Middle East Conflicts Wall Memorial in Marseilles, Ill. It will be presented to his Gold Star spouse. Doug Warner shared that approximately 75 people attended, including the city mayor, the state representative and state senator, and members of other veterans organizations.

American Legion Post 32 in Safford held a Sept. 11 Patriot Day and National POW/MIA Remembrance Day (Sept. 16) memorial service at the post on Sept. 11. The ceremony included prayers, the recounting of the day’s events on Sept. 11, 2001, and a missing man table to remember the servicemembers who are unaccounted for.

- American Legion Post 795, Sons of The American Legion Squadron 795 and Auxiliary Unit 795 in South Lake Tahoe held a ceremony at the post on Sept. 11 to honor the victims and first responders of Sept. 11, 2001.

“Sep. 11, 2022, marks the 21st anniversary of the terrorist attack on our country,” said Post 795 Commander Tom Millham to the Tahoe Daily Tribune. “It’s important to remember the innocent victims and first responders who died on that terrible day along with the brave men and women who continue to fight for the preservation of our great nation.”

- American Legion Huntington Beach Post 133 helped host a Day of Remembrance Patriot Day ceremony outside Huntington Beach City Hall. Flowers were laid at the base of a 9/11 memorial that features two granite pillars to represent the World Trade Center towers, and pieces of steel taken from the towers with the words inscribed, “We Will Never Forget.”

- A few members of American Legion Neal Thomas Jr.-Centennial Post 209 in Colorado Springs, Colo., walked almost three miles while “waving our flags to remember and honor our first responders, military and the thousands of Americans who lost their lives on that fateful 2001 day,” said National Membership & Post Activities Committee Chairman Jay Bowen. “All along the way, we were met with horns honking as cars drove by and people shouting their support. They instinctively knew what we were doing and why we were there.”

The members met at Memorial Park in front of the Global War on Terrorism Memorial and walked to the Fallen Firefighter's Memorial about a mile away where they met retired New York firefighter Sean Genovese. He served with Squad 41 and “visits the memorial each year to remember and honor the men he served with who lost their lives saving others. It was an honor to meet and visit with him and his family.”

After leaving the Fallen Firefighter's Memorial, the Post 209 members walked to the Peace Officer's Memorial. “As with each stop along the way, Post 209 Adjutant Doug Millison shared some thoughts about why we need to continue events such as this to keep the memories alive for those who gave so much,” Bowen said. “Our walk on this overcast and cool morning ended back at the GWOT Memorial. While the walk was short, this meaningful event to honor and remember is lasting.”

American Legion Auxiliary Unit 28 in Millsboro held a 9/11 candlelight ceremony at Post 28 with Legionnaires and Legion Riders to honor those lost on Sept. 11, 2001.

- American Legion Post 240 in Pensacola held a 9/11 remembrance ceremony at the post to educate the younger generation about the events that occurred, so they too never forget. “Remember this is what we want to do,” American Legion post 240 Commander John Edens told WearTV. "Get our children and our grandchildren to remember what happened on 9/11."

- American Legion Post 110 in Port Charlotte held a 9/11 remembrance ceremony that included a bell ringing at the time each of the planes crashed into the twin towers, the Pentagon and in Pennsylvania.

- American Legion Post 140 in Atlanta hosted its annual RPM 911 5K on Sept. 10. The race is named in honor of local resident Ryan P. Means, who enlisted in the U.S. Army Special Forces after his best friend, Adam White, died in the North Trade Tower. Means passed away in 2009 following surgery to remove a cancerous tumor. The race starts and ends at Post 140 located at 3905 Powers Ferry Road, Atlanta.

- American Legion Post 182 in Greenfield held a 9/11 remembrance ceremony at the Veterans Memorial at Sugar Creek Township Park. The post members paid tribute to the lives lost on Sept. 11, 2001, and to all the first responders who sacrificed their lives that day. Following a prayer, former Post 182 Commander Tom Ayer provided gave a speech that reiterated Sept. 11, 2001, is a day we will never forget and one that must be shared with the younger generation. “What does it mean to say, ‘I will never forget?’ We all forget things all the time,” Ayer said to the Greenfield Reporter. “But, in this case, we will keep this moment, this memory just as it was that day, forever.”

- American Legion Post 49 in Warsaw held a 9/11 ceremony at the post for the Kosciusko County 9/11 Memorial Remembrance Committee. The ceremony included remarks from Ken Locke, a member of the Kosciusko County 9/11 Memorial Remembrance Committee and a Post 49 member, a 21-gun volley by the post honor guard, and the playing of taps.

- American Legion Post 283 in Flushing conducted a 9/11 remembrance ceremony at the Soldiers and Sailors Monument in the Flushing Cemetery on Sept. 11. The ceremony honored those who lost their lives in the terrorist attacks and paid a special tribute to Flushing native Todd Beamer, “who is credited with leading a group of passengers who fought and prevented the terrorists who hijacked Flight 93 from reaching the target of the Capital Building or the White House,” according to The Davison Index.

- American Legion Post 44 in Marquette placed 140 U.S. flags at Harlow Park for a 9/11 ceremony to remember those who have served in the military. “You want them to remember you have to be patriotic. It’s not just 9/11 you have to go back prior to World War I and all of the members that we lost in the great wars we’ve had to fight for the freedoms we have had each and every day,” American Legion Post 44 Member Tom Ranta said to TV6. “I think it’s vitally important that we never forget this, and that’s what we hope people drive by and look at those flags and feel proud of this nation.”

- Bozeman American Legion Post 14 held its 11th annual 9/11 ceremony at the post to thank first responders. The event started at 9:03 a.m., the time the second terrorist plane hit the South Tower of the World Trade Center on Sept. 11, 2001. Post 14 provided refreshments, featured speakers such as the Bozeman fire chief, police chief and county sheriff, and conducted a roll call for all those who died 21 years ago.

American Legion Post 35 in Hampton held its annual Global War on Terrorism Monument rededication service on Sept. 11, adding the names of two more New Hampshire servicemembers lost. The names of Army Specialist Brandon T. Martinez of Londonderry and Marine Capt. Nicholas Losapio of Kensington were unveiled as additions to the monument, which now has 81 names of military members from the state who lost their lives since Sept. 11, 2001.

- American Legion Post 574 in Hudson Falls held a 9/11 ceremony that honored the fallen first responders “because when people were rushing out of the twin towers on Sept. 11, 2001, they were going in,” said Post 574 Commander Lawrence Montello to The Post Star.

- American Legion Post 1194 in Binghamton held its annual jamboree on Sept. 11 honoring those who lost their lives during the 9/11 terrorist attacks.

- American Legion Post 8 in New Rochelle held a 9/11 service that was also presented by the United Veterans Memorial & Patriotic Association of New Rochelle. The service included a candlelight vigil, prayer and remembrance of those lost 21 years ago.

- Glenn S. Loomis American Legion Post 332 in Batavia hosted a 9/11 commemoration at the Genesee County War Memorial. Prior to the event, Legion Family members and other volunteers placed 2,977 U.S. flags on the grounds of the Batavia VA in remembrance of those lost on September 11, 2001.

- The commanders of each three American Legion posts – Peter Fiumefreddo of Post 112 in Hawthorne, Drew McFadden of Post 1574 in Thornwood and John Creskey of Post 1038 in Valhalla – revealed the town of Mount Pleasant’s new 9/11 monument on Sept. 11 outside the Town Hall.

- American Legion Post 239 in Worthington held a 9/11 remembrance ceremony at Village Green with speakers and music.

- American Legion Post 526 in Fairborn performed a 21-gun salute and played taps during a 9/11 ceremony at Wright State University's Calamityville.

- American Legion Post 40 in Danville hosted a 9/11 ceremony on Sunday.

American Legion Post 104 in Appomattox and Veterans of Foreign Wars Post 9855 hosted a 9/11 remembrance ceremony that featured retired U.S. Army Maj. Gen. Scott West as a guest speaker. He was at the Pentagon on Sept. 11, 2001, when Flight 77 hit the building.

American Legion Post 834 in Kewaskum provided a gun salute following a Sept. 11 memorial service hosted by the Wisconsin 9/11 Memorial at the Annex in Kewaskum.