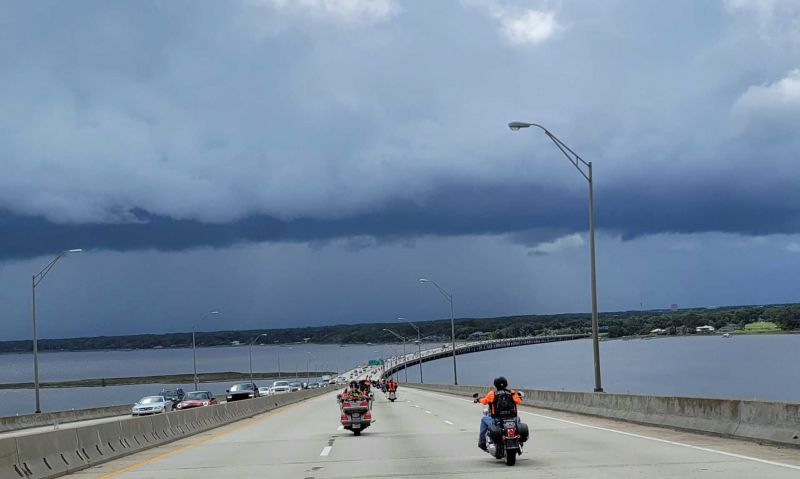 Last year in September, more than 160 American Legion Riders and over 40 passengers took part in the Riders’ first POW/MIA Remembrance, traveling across the Seven Bridges of Jacksonville that cross the St. John’s River. The ride ended at the National POW/MIA Memorial & Museum for a ceremony and was the Riders’ way of bringing awareness to the public about those U.S. servicemembers still listed as prisoners of war or missing in action.

But to organizers of the ride, one year wasn’t enough. So earlier this month, on Sept. 17 – one day after National POW/MIA Recognition Day – more than 200 motorcycles took part in the second annual Florida POW/MIA Remembrance Ride, departing Adamec Harley-Davidson in Jacksonville, riding across the seven bridges and again finishing up at the National POW/MIA Memorial for a ceremony.

“It’s important for people to not lose the message of the POWs and the MIAs and that they’re still missing,” said Department of Florida American Legion Riders Chairman Jim Wineland, a member of American Legion Post 129 in Jacksonville Beach. “It’s more of a message of remembrance to make sure we’ll never lose touch with it.”

Atlantic Beach, Fla., Post 316 Commander Denny Luke again served as the primary organizer for the ride. “The credit for this event goes 100 percent toward Denny,” Wineland said. “He’s the one who brought it to the ALR general membership. He’s the one that brought the attention to it. Denny’s the man. Denny gets the gold star for the whole thing.”

At the ceremony following the ride, the University of Jacksonville ROTC students provided the parade of colors and retirement of colors, and also did a Missing Man ceremony. Luke also noted that several members of Department of Florida leadership were in attendance for the ride, including Past Department Commander and current Alternate National Executive Committeeman Jerry Brandt, First Vice Commander Michael Raymond, Second Vice Commander Chris Hamrick, Northern Area Commander Jim Bowers and multiple district commanders. Hamrick served as guest speaker for the ceremony following the conclusion of the ride.

“Our goal is to make this an annual event, and not just a Riders event, but a complete Legion event,” Luke said. “So we have leadership from the Department of Florida come up and participate in not only the ride, but the ceremony as well.”

Wineland said that type of buy-in at the department level is important. “The leadership is definitely involved, and there’s a commitment from the leadership,” he said. “That is nice to see … that everybody understands the importance of this.

“It’s just important in my eyes, being a veteran … that we still have lost soldiers that will never be found. And that doesn’t give the families closure, and that’s important for the families to move on.”

“Honoring the men and women who have been held captive, and pressing for a full accounting for those who remain missing, is a sacred mission of our organization,” Troiola said during the ceremony, adding that purpose of such an event “is to keep this issue at the top of all our agendas and reminding the media, our leaders and the public to never forget these heroic men and women.”

The following are a few of the ways American Legion Family members across the nation commemorated National POW/MIA Recognition Day. Please remember to share how your post, unit, squadron or chapter observed the day at Legiontown.org.

·       In Priceville, around 100 people attended a POW/MIA remembrance ceremony at Veteran’s Park hosted by American Legion Post 15 in Decatur. Post Commander and retired U.S. Army Capt. Joseph Woodbury delivered the opening remarks. "The Department of Defense estimates there's about 81,600 servicemen and women that left home to defend democracy on foreign shores and never made it back home to their loved ones," Woodbury said. "There's no closure for their families, and these servicemen and women don't get the recognition they deserve."

·       In Phenix City, Fletcher-McCollister Post 135, in partnership with the CSM Association of Fort Benning, conducted a ceremony at the Phenix City Amphitheater. The welcome was provided by Post Commander Nancy Jones, while the Russell County High School JROTC team provided the color guard. During the ceremony, Post 135 member Earl Hutchinson said that a movement to recognize prisoners of war and those missing in action began around the early 1970s when he was stationed at NAS Oceana. “And my unit was responsible for training the pilots and navigators for the missions over in Vietnam,” he said. “We did not get on a first name basis with a lot of the officers, but we recognize them. We recognize their name. So whenever we heard of somebody being shot down, or they became a POW or were listed missing in action, they started a campaign for wearing a rubber bracelet.”

In Colorado Springs, American Legion Centennial Post 209’s Legion Family conducted a POW/MIA recognition ceremony by Post Commander Rob Barry and Chaplain Brad Henderson. All veterans present were given certificates of appreciation for their honorable service to the nation.

·       In Bristol, members of American Legion Post 2 gathered for their POW/MIA ceremony that included remarks from Post 2 member Bob Barnett about his experience as the relative of a POW/MIA soldier. Barnett’s brother, George Joseph Barnett Jr., was a prisoner of war during the Korean War. In 1954, Barnett learned that his brother had been executed at a prisoner of war camp. “We do this because we can’t forget, not any of them, not George, not World War II veterans or WWI,” Barnett said. “In my case, I know what happened to my brother. There are many who will never know.”

·       In Braintree, American Legion Post 86’s observation of the day that included Post Adjutant John Pelose reading an explanation of why the empty POW/MIA table is set up the way it is.

American Legion Haisley Lynch Post 16 hosted the Alachua County observance of National POW/MIA Recognition Day. The guest of honor was Hank "Sarge" McQuinn, who was wounded in action during the Korean War and later captured after a combat jump behind enemy lines. Post 16 provided lunch following the ceremony.

In Bowling Green, American Legion Post 23 and members of the Greenwood High School Navy JROTC hosted a POW/MIA Recognition Day ceremony that included the setting of POW/MIA table, a 21-gun salute, the playing of taps and more.

In Jaffey, members of American Legion Post 11’s Legion Family and other community members conducted a 24-hour vigil over a POW/MIA table to honor Americans who are missing in action or prisoners of war. Those who participated stood guard over the table in 15-minute shifts over the 24 hours.

“The whole purpose of it is to make people aware there are still POWs and MIAs that are not accounted for. We just want to keep that in the public’s mind,” American Legion Department of New Hampshire Commander Charlie Arkwell told the Monadock Ledger-Transcript.  “Not just for the veterans, but for everybody in this country – they should be very grateful for the people that have stepped up and served, but should keep in mind also, the POWs and MIAs and their families, and what they’re going through not knowing where their loved ones are.”

·       In Binghamton, American Legion Post 1645 hosted its annual POW/MIA ceremony, reading the stories of notable prisoners of war and missing servicemembers from past U.S. conflicts and wars. The ceremony also included prayers, speeches and patriotic music.

·       In West Endicott, Post 1700 also hosted a POW/MIA event. Post 1700 Commander Dave Williams said it’s important to remember and honor their contributions. “These men and women have given sacrifices for this country so that we can do and have things that we do on an everyday basis without even thinking about it. If it wasn’t for the sacrifice that they made to this country, we wouldn’t be able to do these things that we take for granted.”

In Vass, American Legion Post 296 presented a POW/MIA flag to the Town of Vass to fly in the town’s Cameron Irby Memorial Park. Post 296 Commander Matt Litzinger presented the flag to Mayor Pro Tem Matthew Callahan at the Town Board of Commissioners meeting.

American Legion 211 in Avon Lake combined its POW/MIA remembrance ceremony with a celebration of the U.S. Air Force’s 75th birthday. During the ceremony, the post placed its fourth memorial stone, this one honoring the Air Force. The newest, along with the three previous in place (Army, Coast Guard and Marine Corps) will be joined by a U.S. Navy stone during the post’s Navy birthday event.

In Hawkins County, American Legion Post 21 hosted POW/MIA ceremony that was open to the public.