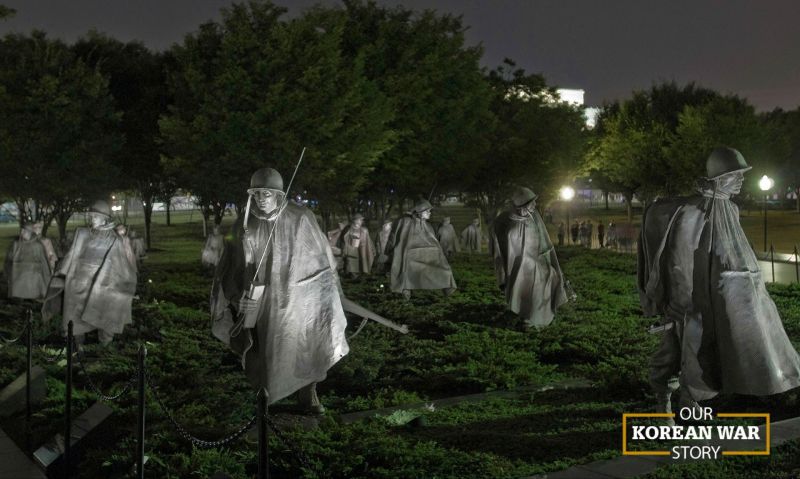 Observed in the Aug. 10, 1995, American Legion Dispatch’s coverage was a profound contrast between conditions in the combat theater and at memorial dedication ceremonies more than four decades after the Korean War’s end.

“Thousands of the 1.5 million Americans who served on the Korean peninsula against ruthless North Korean and Chinese troops, frost-bite and mind-numbing fatigue endured suffocating heat and humidity July 27 to celebrate the long-awaited dedication of the Korean War Veterans Memorial in Washington, D.C.,” the national publication reported.

Water jugs were provided to veterans as temperatures climbed to 96 degrees, with heavy humidity. “The heat was tough, but we survived it,” Legionnaire and Korean War Army veteran Bill Honnef of Post 226 in Brackenridge, Pa., said during the late-July dedication. “We’re survivors anyway. We’ve been looking forward to this for a long time.”

American Legion Past National Commander John P. “Jake” Comer, a Korean War veteran who had been appointed by President George H.W. Bush to serve on the national Korean War Veterans Memorial Advisory Committee, later pointed out that the Legion made a popular decision for ceremonies, especially given the weather.

“Plans for the dedication ceremonies included a wreath-laying ceremony (and) a Pusan Tent City where The American Legion had an air-conditioned tent,” Comer later told delegates to the 77th American Legion National Convention that year. “Let me tell you, that certainly came in handy … The other veterans’ organizations did not have the same …The American Legion really was out front – first class.”

More than 50,000 were estimated in attendance for the memorial dedication. Approximately 400 Legionnaires – including every national officer – marched behind then-National Commander William Detweiler of Louisiana in a parade to commemorate the dedication on 2.2 acres of the National Mall. American Legion bands from Massachusetts and North Dakota marched and played in the procession. Legion color guards from across the country participated, and Detweiler had receptions to honor 51 Korean War veterans. Detweiler also joined President Clinton in a wreath-laying ceremony at the Tomb of the Unknown Soldier during the four days of honor.

Also during that time, Samsung Corp. entrusted The American Legion with a $5 million scholarship endowment for the descendants of Korean War veterans, later extended to descendants of other wartime U.S. veterans, in thanks to those who freed South Korea from communism.

South Korea President Kim Young Sam made the memorial dedication the centerpiece of a four-day state visit with President Clinton. Talking with local reporters, President Kim “said the 54,246 Americans who died in the war – 34,000 in combat – left a legacy of a free, vibrant South Korea, which suffered 570,000 war dead,” the Dispatch reported. “The United States also lists 103,284 wounded, 7,140 prisoners of war, and 8,177 missing in action who were sent to the Korean peninsula in response to North Korea’s invasion, on July 25, 1950.

“There are some U.S. veterans who left their souls in Korea,” Kim said. “Their sacrifices were not in vain.”

The American Legion was a major contributor to the memorial with its 19 stainless steel figures of U.S. troops from multiple branches on patrol. “The weary, poncho-clad troopers represent the ground-pounders from all branches of the military, 14 Army, three Marines, one Navy medic and one Air Force observer,” the Dispatch observed. “On their right stands a 164-foot, 8-inch long thick granite wall. On its highly polished gray/black granite surface are etched the faces of 2,400 support personnel and all the machines and weapons of war needed to sustain troops in the field.”

Fiber-optic illumination of each statue was particularly moving to Past National Commander Comer, who worked to raise funds and awareness for the project for years, promoting donations and merchandise sales. “What amazed me was the memorial at night,” Comer said. “The statues each have a spotlight that shines just on the faces.” The faces of the support personnel, etched in granite, seem to float behind the statues at night. “It’s very eerie and dramatic,” Comer said.

One initiative recognized at the national convention came from American Legion Department of Illinois Korean War Veterans Memorial Chairman Jack Cover of Post 69 in Robinson, Ill., who designed a remembrance pin the Legion was able to sell and put about $80,000 toward the memorial. Shirts, hats, mugs and coin sets were also sold to help the Legion provide some $700,000 for the memorial.

“There is no finer monument in the history of our nation,” Comer told the 77th National Convention, meeting in Indianapolis. “The Korean War veterans will be forgotten no more.”

Detweiler summed it up this way: “We helped launch the long-awaited memorial to women (the Vietnam Women’s Memorial, 1993) who have served side by side with men in the defense of this country. We helped dedicate the long-awaited Korean War Memorial. Why? Because we, as a people, and we, as an organization, must never forget and must never let future generations forget the deeds of the valiant men and women who answered the call of this country, who asked no questions but gave their talents and time and their lives, in many instances, to protect the freedoms and the peace that we all enjoy today. Why? Because it’s the right thing to do. It’s the American thing to do.”