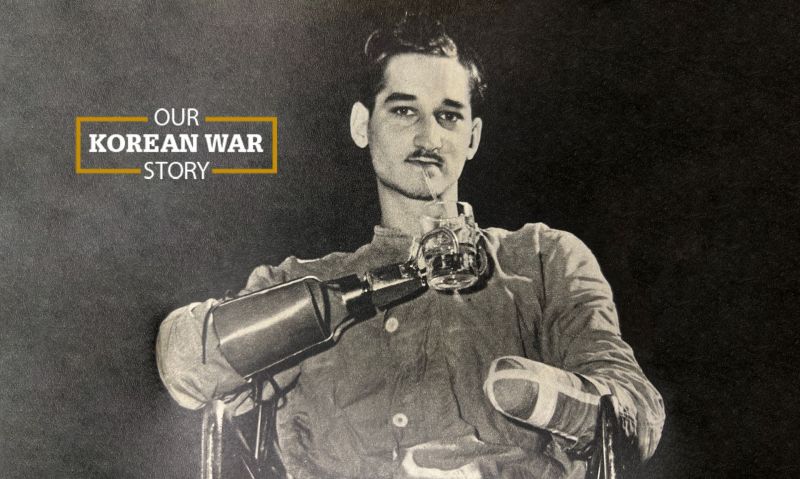 Nineteen-year-old Robert Smith of Middleburg, Pa., decided to join the Army on Easter Sunday, 1950. He was out of work, and his widowed mother had raised him and two siblings on state assistance.

By Christmas Eve that year, Philip Bucci wrote in The American Legion Magazine, “he had been to Asia, and only part of him came back.”

Smith trained briefly at Fort Knox, Ky., before he was rushed to Japan and soon joined Gen. Douglas MacArthur’s “leap-frogging invasion at Inchon, Korea, in September and fought with advance infantry elements down to relieve the old Pusan beachhead,” according to Bucci’s account.

On Nov. 27 – 20 days after his 20th birthday – Smith was fighting near the Manchurian border when he was shot in the arm and spent days in a frozen ditch until he crawled to an unheated shack where he was beaten and kicked by enemy captors. He could only feel the blows to his chest because all four of his limbs were frozen.

On Dec. 7, a U.S. Marine patrol found and rescued Smith and two others, all frozen and nearly starved to death. He was immediately sent to USS Consolation hospital ship where his wounded arm and his three other frozen limbs were amputated “to save him from death by gangrene,” Bucci wrote.

Smith’s mother did not know the extent of her son’s injuries and learned from a news reporter that he had lost all of his limbs. He would spend most of the next year at Walter Reed Army Hospital.

The American Legion Department of Pennsylvania took action once the story of the young soldier’s fate became known. The Legionnaires furnished a plane to fly Smith’s mother to the hospital to see her son. The Legion also began raising funds to help the family. “Before the first of the year, a tremendous outpouring of money – pennies, dimes, dollars, hundreds of dollars, thousands of dollars – began to come into the headquarters of The American Legion Department of Pennsylvania,” Bucci wrote. By the summer of 1951, more than $120,000 had been raised. The Real Estate Trust Co. of Philadelphia, where a local American Legion officer was also an official, agreed to manage the fund without cost to Smith or the Legion, and Gov. John S. Fine and University of Pennsylvania President Harold E. Stassen – both Legionnaires – served on the advisory committee to manage Smith’s funds for the Legion.

As he was learning to use prosthetic limbs at Walter Reed, Smith was advised that the funds raised would provide $20,000 to build a house for him and his mother, $10,000 to start a business and $5,000 a year for life. “He will be financially secure, but armless and legless,” Bucci wrote, adding that Smith would likely have multiple operations in the years to follow.