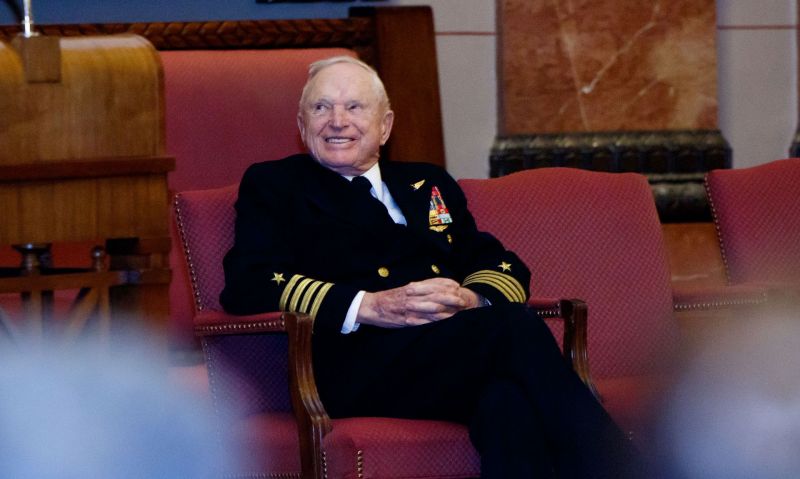 Steve Lewandowski, a member of American Legion Post 416 in Encinitas, Calif., is coordinating the effort.

“We’ve really re-invigorated the program,” Lewandowski says, noting they are working with the Legion’s Legislative Division to firm up support in Congress. “It’s an all-Legion effort. We are working like hell to get him the Medal of Honor. I like our odds.”

On Nov. 18, 1952, Williams and three other American pilots from USS Oriskany were confronted by seven Russian MiGs, five miles from the North Korean-Soviet Union border. Not only was Williams outnumbered, but the MiGs were far superior planes to his F9F-5 Panther.

After safely landing his heavily damaged plane back on Oriskany, Williams was ushered into an urgent briefing and sworn to secrecy. Military leaders didn’t want a military escalation amid the Cold War.

Williams, the only American aviator to single-handedly shoot down four Soviet MiGs, didn’t tell anyone until Russia declassified its report 50 years later. How did he keep it to himself for so long?

When Williams was awarded the Silver Star, the entire picture of his heroics was not accessible, his supporters point out. The radio transcripts had not been released, and Russia had not declassified information about its losses until decades later.

Once the story emerged, the National Executive Committee threw its support behind the effort. It passed Resolution 70 in August 2017, which called for petitioning Congress and the Department of Defense.

In Congress, Rep. Darrell Issa of California has introduced a bill authorizing the president to award the Medal of Honor to Williams. The bill has been included as a provision in the House version of the Fiscal Year 2023 National Defense Authorization Act (FY23 NDAA). Arizona Sen. Mark Kelly, a former Navy pilot, introduced a companion amendment in the Senate version of the NDAA.

American Legion staff and members continue to advocate for the provision to remain in the final version of the FY23 NDAA that passes Congress and reaches the president’s desk.

Lewandowski remains resolved to honor Williams, who also is a member of Post 416.

“I was told the only way you can do this is through the court of public opinion and political pressure,” he says. “We are going to continue to ramp up the pressure on this. This is our last, best chance.”