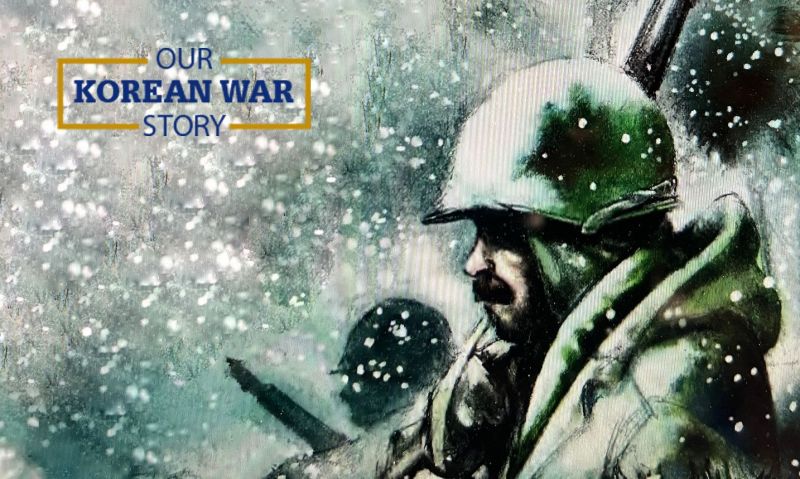 The December 2000 American Legion Magazine continued its 50th anniversary tribute to those who served in the U.S. Armed Forces during the Korean War. A two-page presentation of letters from veterans recollected holiday memories from a half-century earlier.

One came from a former prisoner of war who told of unsuccessful enemy attempts to break the spirit of Americans in captivity. He sent in a card from the Chinese that on the front wished Americans “A Merry Christmas & A Peaceful New Year” and on the back asked “Why are you … freezing and dying 5,000 miles from home when you belong with your families?”

Other letters were submitted in gratitude for media interviews from the front that delighted families at home. And one combat veteran told how much an expected government check meant to him and his wife as they struggled to make ends meet in the winter of 1951.

The Korean War was not only fought with weapons – it was fought with the mind. A Christmas card was given to me and other U.S. POWs in 1951 during our captivity in a camp on the Manchurian border. I was in the POW camp for about six months.

The Chinese used propaganda like the Christmas card to try to break our will. Receiving that on Christmas, 5,000 miles away from home, was tough. The Chinese hoped it would be a morale-breaker, but it didn't work.

Nineteen of us escaped when we were ordered to pick up new Allied prisoners. A surprise artillery barrage disrupted their arrival and gave us an opportunity to flee. A few miles away, we met up with three U.S. tanks and rode out on them.

I went home after the escape and then to Washington, D.C., where I informed officials about POW locations and conditions.
– Calvin Williams, Houston

We all have our special Christmas song that we enjoy during the holidays. Mine is “I'll Be Home for Christmas.” Being away from home at Christmas is difficult for anyone, but for a service member overseas in a war zone, it can be traumatic.

Christmas was only a few days away, and I was in a far-off, hostile land called Korea. I was cold, frightened and lonely. I longed to be home with my loving family to share the warmth and security of their love.

While shivering in my foxhole, I dreamt of being at midnight Mass and opening the presents under the tree with my family. I could taste the delicious turkey dinner with all the trimmings that my dear mother cooked for me. While standing under the mistletoe, singing carols with family and friends and drinking hot chocolate, I could feel the tender kiss of my sweetheart on my cheek and the loving embrace of my kid brother.

All was wonderful when suddenly I was shocked back to reality.

“Hey, soldier, we're from Armed Forces Radio. Would you like to send a message home?” One guy shoved a microphone in my face while the other operated the recorder. “Say anything you like,” he said. With a cracking voice and tears in my eyes, I spoke to my mother and family.

AFR notified my family that I would be talking to them on the radio on Christmas. All my family, friends and neighbors crowded around the radio to listen to me. It was the best present they had that Christmas. By the way, the last verse “I'll Be Home for Christmas” is “If only in my dreams.” And it was. Thanks, Armed Forces Radio.
– Martin Francis Farricker Sr., Woodbridge, N.J.

As seen on TV
On Christmas 1951, I was serving with the 7th Division, 31st Infantry Regiment, Fox Company. My buddies and I went to Christmas Mass and were thrilled to find it being served by Cardinal Francis Spellman of New York. He was a wonderful priest. He took time to shake hands with as many of us as possible.

A few days later, on New Year's Eve, my mother was watching television and suddenly realized she was seeing me and the cardinal. Screaming, she yelled to my father so he could see this wonderful gift. Seeing her son so many miles away when she was missing him so much was the best Christmas present my mother could get – or I could ever give.
– Philip Kinsella Jr., Barnegat, N.J.

Surprise in the mail

In December 1952, the holiday season ahead looked bleak.
Dot and I had married the previous January, not long after I returned from Korea, and I was now a freshman at the University of Maine. We were both working to keep our heads above water – she in the daytime and me in the evenings – to supplement the GI Bill stipend, which just about covered out-of-state tuition, books and supplies.

After reviewing our finances, even counting deposits on the soda bottles we had ready to turn in, we didn't have enough left over to buy presents for our families. We couldn't even afford the postage to send the presents.

Then one day I received an official government envelope.

Did the Marine Corps want me back? After all, the Korean War was still going on.

Imagine our delight when we opened the envelope to find a check for $495. For what, we wondered? It was combat pay at the rate of $45 a month from September 1950 through July 1951. Those 11 months tracked me from Inchon to Seoul, to Wonsan and the Chosin Reservoir, and back south to battle the Chinese in the spring and summer of 1951.

We bought some presents and mailed them home first-class. Dot bought a maternity dress, and we went for Christmas dinner at the fanciest restaurant in town. The first was a necessity, but the last was pure extravagance.
– Norman J. Van Valkenburg, Saugerties, N.Y.