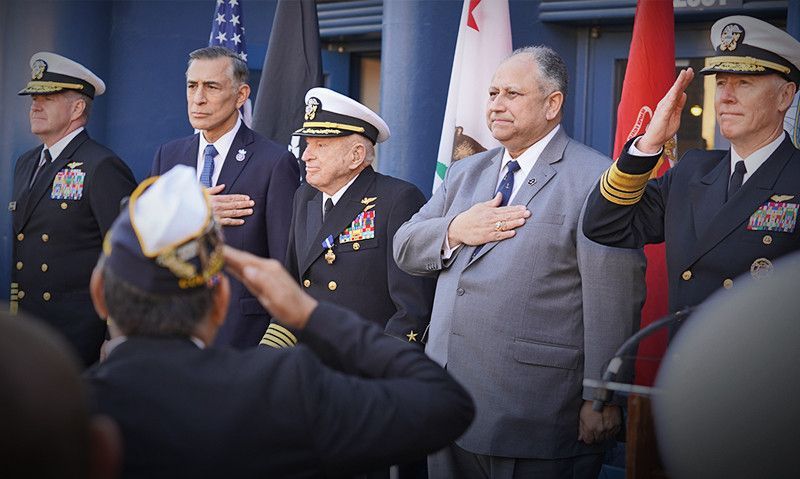 During a ceremony at the San Diego Air & Space Museum, retired U.S. Navy Capt. Royce Williams, was honored with a long-awaited recognition of his heroism during the Korean War. His Silver Star, which he received during the Korean War, was upgraded to a Navy Cross after declassified documents revealed the details of an encounter with four Russian MiGs off the Korean Peninsula in 1952. Officiants in attendance included: (r-l) Commander, U.S. Pacific Fleet Adm. Samuel J. Paparo Jr., Congressman Darrell Issa (CA 48), Captain Royce Williams, USN (Ret.), Secretary of the Navy Hon Carlos Del Toro, and Commander, Navel Air. Forces Vice Adm. Keneth Whitesell.

“If I’m not showing it, I’m absolutely thrilled,” Williams said during the ceremony. “I never expected any recognition.”

In attendance was Legionnaire Steve Lewandowski, who is spearheading efforts to get Williams an upgrade to the Medal of Honor. “I’m really happy for Royce to finally get this recognition for something that is quite impressive,” he said. “While this is a wonderful development it does not preclude him from receiving the Medal of Honor.”

Lewandowski and Williams are both members of American Legion Post 416 in Encinitas, Calif.

On Nov. 18, 1952, Williams shot down four Russian MiGs in just over a half hour off the Korean Peninsula, an aerial feat that has never been duplicated. “ “I’d never worked so hard at flying an airplane,” he told American Legion Magazine for a story featured in the November 2017 issue.

Upon landing his heavily damaged plane on the USS Oriskany, Williams was sworn to keep the incident a secret, which he did for more than 50 years until it was declassified. Senior officials were concerned that news of the firefight might drag the Soviets into a broader conflict with Korea. Additionally, the United States didn’t want to reveal the existence of the brand-new National Security Agency (NSA), which had agents on board Oriskany.

How did Williams, who earlier received the Silver Star, keep it a secret for so long?

The National Executive Committee threw its support behind the Medal of Honor effort when it passed Resolution 70 in August 2017, which called for petitioning Congress and the Department of Defense.

Others who are supporting Williams for the Medal of Honor include more than 115 admirals and generals, the Boy Scouts of America and members of Congress.

“Today was a great moment for Royce,” Lewandowski said. “But it’s a little short of our goal. We are going to continue to pursue getting him the recognition he truly deserves, the Medal of Honor.”