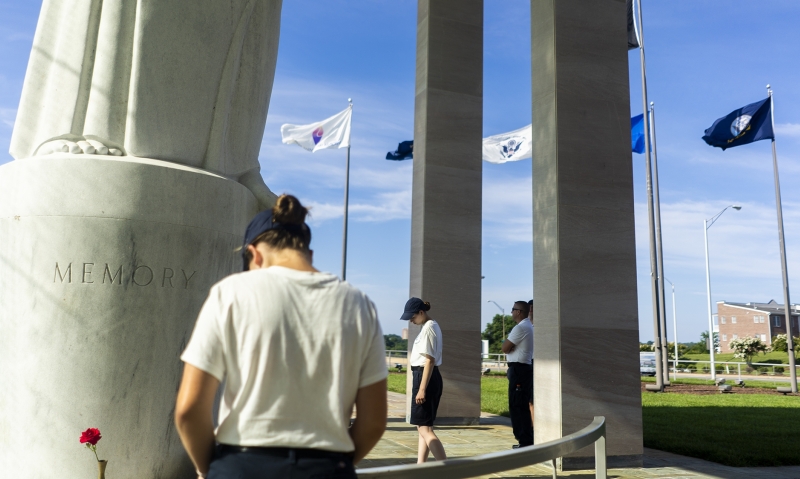 In 2006 as a soon-to-be high school senior, William Blount was trying to figure out if a career in law enforcement was for him. One week in an American Legion program sealed the deal for Blount.

Now a Virginia state trooper, Blount went through the Department of Virginia’s Youth Cadet Law Enforcement Program. He said getting the opportunity to “test drive a career” made the decision easier.

“It completely opened my eyes to what a trooper trainee goes through during one week in the academy,” said Blount, who thought so much of the program that he just finished up his fifth stint as an instructor for it. “It completely provided me with everything I need to know if I was going to be ready to put in for that kind of career.

“My parents asked me when they arrived for graduation how I liked it and if I still wanted to be a trooper. I told them I’d sign up tomorrow if I could. It really helped to shed some light on the entire career.”

Blount joined nine other state troopers, a handful of Virginia Legionnaires and 50 teenagers – male and female – June 24-29 at the Virginia State Police Academy in North Chesterfield for the 29th year of the Department of Virginia American Legion program.

Blount said he came back to the program as an instructor “to help instill those concepts that were instilled in me when I was a law cadet. It’s a whole different class of students (at graduation) from what we saw here on Sunday night.

“I remember that from being a cadet. I remember going home and being afraid to put my hands in my pockets because of being grilled during the week. Even students who have never had the habit of saying ‘yes sir’ and ‘no sir’ … even after they got home they still had a hard time not doing some of the things that were instilled here.”

Cadets check in on Sunday and spend the next five nights at the Virginia State Police Academy in North Chesterfield. There they undergo training and receive presentations in crime scene investigations, defensive tactics, driving, firearms and water safety. There also is regular military drilling, physical training, a K-9 demonstration, and a crash overview and DUI simulator.

Mixed in with the cadets and instructors are a group of Legionnaires who serve as counselors – many for multiple years. Department of Virginia Law & Order Chairman Bill Feasenmyer has served as the program director for four years, admitting he “jumped at the chance” when offered the position.

“This is one of those programs where you actually get a chance to interact with the kids one on one and for a long period of time,” Feasenmyer said. “That’s what I love to do."

Feasenmyer said the program matters because “in this day and age, kids are exposed to a lot of different things that kids shouldn’t be exposed to – things that they have to make the right choices about. I think this program is one of those, like a lot of American Legion programs, that steers them down the right path. If we can mentor them and be an example of what path to take – not just tell them, but show them – that’s what this program is all about.”

Department of Virginia Legionnaire Brett Reistad, the leading candidate for 2018-2019 national commander and a 26-year veteran of the Fairfax County (Va.) Police Department, said the law cadet program gives youth a chance to look into law enforcement as a possible career.

“There’s a lot of interest in public safety among our teens in particular,” Reistad said. “To give them a program that allows them to see what that career field is like is a great thing. The American Legion does a lot of good for them by having the youth law cadet programs around the country.

“I’ve had a chance while traveling the country to talk to a lot of other law enforcement officers about their programs in their respective states, and they see the very same things. Those kids go in undirected, and they come out looking like they’ve learned how to march (and) how to be respectful. The parents are sitting in the audience (at graduation), and I can see the looks on their face. They come up to the counselors and say ‘I can’t believe my child did that.’”

That change that takes place in the cadets over six days is one of the reasons Joyce Miller, a member of Post 180 in Vienna and one of the Department of Virginia’s women veterans coordinators, has been a counselor in the program for eight years.

“A lot of the kids that come in don’t know what they want to do (as a career), and a good many of them will switch and say they want law enforcement or they want the military,” Miller said. “Or they want ROTC to go to college. After you go through this program, you have good leadership skills and you know how to work as a team.”

Tommy Powell, Virginia’s District 17 vice commander and a member of Post 130 in Falls Church, has been a counselor in the program for 15 years. Coming back year after year comes from “the enjoyment of watching the kids progressing toward pulling together as one team … and also giving them the experience of what the state police have to endure and the discipline they have to maintain. If it only gives one man or one young lady the ability to have more respect for a state trooper, this program is worth it.”

Like the counselors, many of the program’s instructors come back year after year. Senior Trooper M.S. Walden has been an instructor with the program for 15 years and spent 20 years in the U.S. Navy. Walden said he initially was asked to be a part of the program by a fellow state trooper in order to teach the cadets military drilling. “After that, it seemed like every year I got a call to come back,” he said.

For Walden, being an instructor gives him a chance to make a positive influence on a young man or young woman. “I came up in a pretty rough city in Detroit,” he said. “I look at a lot of friends I grew up with who went the wrong way. If I can help one go the right way, I always take that opportunity.

“I enjoy coming back. It’s an awesome program.”

Walden witnesses firsthand the difference in the cadets from the start to finish of the program. “They come here relaxed. They’re thinking they’re still going to the beach,” he said. “They think it’s going to be a summer camp-type thing. A lot of them are laughing and joking.

“But as soon as they step inside the Virginia State Police (Academy), the shock happens. From that together with parking lot to just between those two double doors, reality hits them that they’re in a different world.”

Walden said he and his fellow troopers “start on” the cadets right away. “Our biggest thing is for them to come together as a team,” he said. “We make them understand that there are no individuals. We all train the same. We all work the same so that we can all help each other out the same and be on the same page.

The effort of the instructors made an impact on members of this year’s graduating class. Zachary Everson, a 17-year-old senior at Liberty High School in Bedford, Va., was this year’s Jessica J. Cheney Spirit Award and credited both the troopers and his fellow cadets for “pushing me all week.” The annual award is presented in memory of Trooper Jessica J. Cheney, who was the first cadet to graduate from the Legion program and become a Virginia state trooper. Cheney would later die when she was hit by a vehicle while directing traffic at the scene of a crash.

Like Cheney, Everson wants to pursue a career in law enforcement. “I’ve gotten a lot out of this,” he said. “I’ll probably have a lot more discipline than I used to. That’s a huge key to what they are trying to teach us: discipline and attention to detail.”

For 16-year-old Margarita Hernandez-Perez, a senior and JROTC cadet at Harrisonburg (Va.) High School, an interest in criminal justice brought her to the program. After getting over the shock of having her cell phone taken away – the rule for all cadets – Hernandez-Perez said the week was a good learning experience.

“It’s helped me learn that you don’t just get into (law enforcement). It has steps to it,” Hernandez-Perez said. “You need to learn. Learning is the biggest thing. And the discipline part. That’s really going to stick with me.”

Taylor Blocker, 17, a senior at Gloucester (Va.) High School and the daughter of a career Coast Guardsmen, said she was encouraged to participate in the program by her JROTC instructors. Her father’s military service has driven Blocker to either follow in his footsteps or enter into law enforcement; attending the law cadet program, she said, would help her “expand” her choices and explore a little.

The week at the state police academy left Blocker “extremely grateful I was able to come and do this. And I will definitely make my bed every morning. I wouldn’t say that I was undisciplined before I got here. But I am definitely a lot more cognizant of the things going on around me. I feel more mature for some reason. More professional.”

The Virginia State Police do not charge room and board to the cadets, and each of the instructors volunteers his or her time. American Legion posts sponsor cadets to offset the costs of t-shirts, shorts, caps and transportation during offsite visits.

This year’s offsite visits included a lengthy stay at the Virginia War Memorial, a tour of the Virginia Executive Mansion and visit with Virginia First Lady Pamela Northam, and a lunch stop at Maj. Charles A. Ransom Post 186 in Midlothian.

Post Quartermaster Dick Hahn, who coordinated the lunch effort and did much of the cooking, said the post prepares enough food for twice the amount of cadets, counselors and instructors. “They come in here hungry,” he said. “If there’s 65 coming in here, I plan on feeding 130.”

“These poor kids eat like they haven’t eaten in a month,” Post 186 Commander Stevie Holmes said. “They come in here and they’re like ‘Can I have two?’ We tell them ‘Yes, you can.’ I guess cafeteria food isn’t high on their priority list.”

Holmes said hosting the cadets “is a lot of fun. It’s good for community relations. We even have a law cadet in this group that our post sponsored. Just seeing the smiles on the faces when they’re chowing down … it’s fun.”

Hahn called the cadets “the dedicated ones. They come in here meaning it. I think they appreciate the interaction with us, and we appreciate it with them.”

There’s no doubt that’s the case with Blocker. “It’s my understanding that The American Legion was established to help the military and their families,” she said. “I think that it’s a wonderful thing that they do this.”