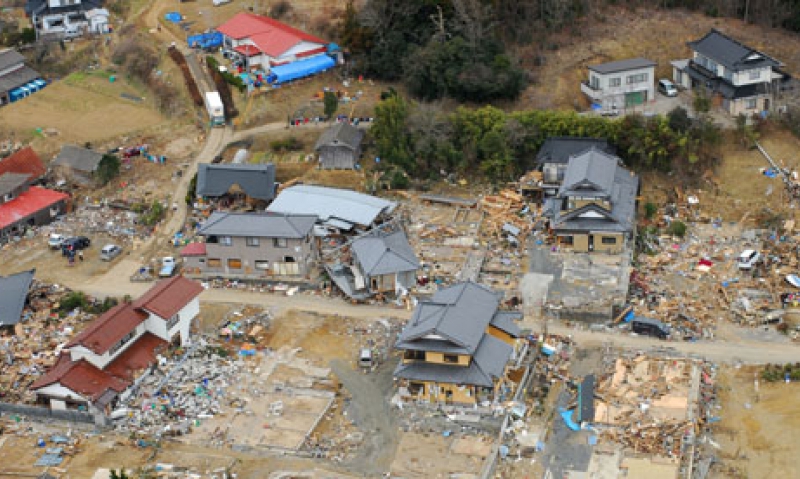 The cascading catastrophes in Japan - the 9.0 earthquake, the killer tsunami and the partial nuclear meltdown at the Fukushima Dai-ichi plant - may have done more than claim some 18,000 lives, erase a dozen towns and villages, and destroy $300 billion in property and wealth. The triple disaster may also force Japan, America's closest and most important ally in the Asia-Pacific region, to turn inward. One can hardly blame the Japanese if they choose that path. However, it will risk the long-term security of the region, and create new challenges for the United States.

The irony is that before the March 11 earthquake and tsunami, Japan was reawakening to the responsibilities of regional security and global leadership. After decades of politely passing on opportunities to project power - an understandable self-imposed consequence of Japanese militarism in the first half of the 20th century - it had begun to recognize not only that it was mature enough to wield military power in a responsible manner, but also that the United States and other allies needed it to play such a role.

Indeed, with a nuclear-armed and increasingly unpredictable North Korea to its west, and a behemoth-in-the-making China flexing its economic and military muscle throughout the neighborhood, Japan's decision - to move beyond its tradition of postwar pacifism, strengthen its armed forces, and rethink its security role - was not only reasonable, but arguably necessary. In the past two years alone, North Korea has spasmodically tested nukes, fired off missiles disguised as "satellites," sunk South Korean ships, and pummeled South Korean islands - all while China conducts illegal naval maneuvers in Japanese waters, violates Japanese airspace, cuts off Japan from vital raw materials, and makes outlandish claims on the waters and resources of the region.

Hence, prior to March 11, Tokyo had announced plans to surge into the forefront of sea- and land-based missile defense; deploy new force-projection naval assets; begin the process of changing the constitution in order to free up the Japanese Self-Defense Forces to play a constructive role in international security; strengthen security partnerships with South Korea, Australia and India; deepen its alliance with the United States; and build what defense minister Toshimi Kitazawa called "a dynamic defense force." In fact, in early 2011, The New York Times reported that Japan was even negotiating a landmark military-cooperation agreement with South Korea.

Moreover, in what would have been filed under "unthinkable" just 10 years ago, Tokyo elevated the Defense Agency to a full-fledged ministry for the first time since World War II; deployed peacekeeping units to Iraq and Afghanistan; sent warships to fight pirates off the coast of Africa; and outlined plans for a permanent military base in Djibouti to support the international anti-piracy campaign.

Finally, in a sign of just how serious Tokyo had become about the threats to its west, a Japanese government panel last year released recommendations calling on the Japanese military to be prepared to participate in contingency operations in Korea and the Taiwan Straits, and urging Japanese officials to be open to lifting bans on "development and possession of nuclear weapons and their transportation to Japan," according to a Defense News report.

In short, pre-quake Japan had come to grips with a new reality - namely, that it stands on the front lines of a new cold war that could turn very hot very fast, and as a consequence has new responsibilities.

The question is: Does post-quake Japan have the will and resources to take that front-line position?

On the resource side of the equation, March 11's $300 billion economic toll translates into 7 percent of the Japanese GDP. Even before the quake, Japan was trimming its defense budget. The quake and its consequences promise to force further retrenchment in military spending. Moreover, The Wall Street Journal reports that about half of Japan's entire military has been deployed to the quake-tsunami-fallout zone in northeastern Japan. To put this in perspective, imagine a natural disaster suddenly requiring the United States to divert 1.2 million troops (about half of the U.S. military's total force of active-duty personnel, Guardsmen and reservists) and $980 billion (7 percent of U.S. GDP) to a relief, recovery and rebuilding effort.

That gives us a sense of the size and scope of what Japan is going through, which leads us to Japan's will, which is perhaps where America can provide the most assistance to its Pacific partner.

After the quake, U.S. forces some 15,000 strong rushed to help the Japanese people. The U.S. military dispatched heavy-lift helicopters and cargo planes; carried hundreds of victims to safety; transported Japanese troops in and around the disaster area; delivered thousands of gallons of water and fuel, thousands of MREs and blankets, and equipment of all kinds for use in search and rescue; and supplied high-powered water pumps to fight the meltdown at Fukushima. (Find out more at http://tiny.cc/sjfa1)

The joint U.S.-Japan effort was aptly called Operation Tomodachi, the Japanese word for "friend." It technically ended in April, freeing up the bulk of the U.S. task force to return to keeping the peace in the increasingly dangers waters of the Pacific. However, hundreds of U.S. troops trained in nuclear-incident response are still on the scene, reminding the Japanese people that they are not alone as they rebuild - and that America believes they can recover. Let's hope Japan believes that, too.