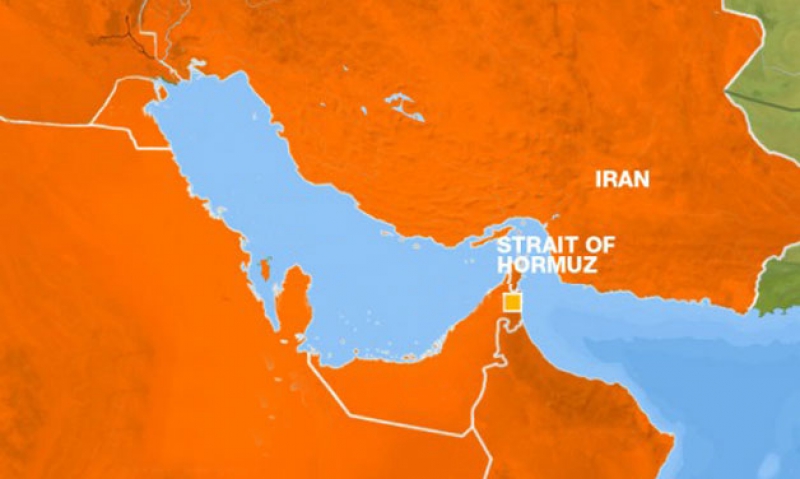 Tehran is making lots of noise about closing the Strait of Hormuz, the vital international waterway at the mouth of the Persian Gulf that carries 17 million barrels of oil per day. Leaked intelligence reports suggest Iran may dump oil into the strait, thus making it impassable for a period of time, in hopes of forcing the West to lift sanctions. Similarly, the Iranian parliament has proposed closing the strait “until the annulment of all the sanctions imposed against Iran.”

All of this comes on the heels of the Iranian naval chief’s boast that closing the strait is “easier than drinking a glass of water.” Lately, Tehran has punctuated its threats with missile tests and war games—most recently this month—which have the effect of limiting traffic through the strait.

Before exploring how best to respond, a threshold question must be answered: Can Tehran make good on its threats? The short answer is yes. According to Joint Chiefs Chairman Martin Dempsey, Iran can “for a period of time block the Straits of Hormuz.” The Congressional Research Service (CRS) describes how, citing Iran’s 5,000 sea mines, 100 fast-attack boats designed for “swarming” larger vessels, and sea-skimming missiles and coastal missile batteries. In fact, Iran just opened its fifth naval base in the strait.

Some observers contend that Iran’s rulers would never block the strait because the consequences would be disastrous for them. This overlooks two important truths:  First, while it would be wrong to say that Ayatollah Ali Khamenei and his henchmen have nothing to lose—after all, they could lose their regime in the event of war—they certainly have less to lose today than before the West tightened the sanctions’ noose. Second, Iran has tried something like this before. During the Iran-Iraq War, Iran attacked ships transiting the Persian Gulf. With their backs to the wall, Iran’s current rulers are capable of anything.

That brings us to responses. What if the president declared that closure of the strait would constitute “illegal interference with navigation of the sea”? What if he made it clear to Iran’s leaders that “we will protect our ships, and if they threaten us, they’ll pay a price”? What if he deployed sufficient military force to ensure that Tehran had “no illusions about the cost of irresponsible behavior”?

As a matter of fact, the president has already delivered such a response. Of course, it was President Ronald Reagan who did so. It happened in 1987-88, after Iran began interfering with international shipping in the Gulf. When an Iranian mine ripped through a U.S. warship, Reagan had enough and ordered a series of punishing military responses against Iranian naval assets. While most Americans forget this war on the Gulf, Tehran doesn’t. On a single day in 1988, the U.S. decimated Iran’s navy.

This wasn’t the first time Reagan used American naval power to ensure freedom of the seas. After Libya’s Moammar Qaddafi unilaterally claimed the Gulf of Sidra—a huge chunk of the Mediterranean considered international waters—Reagan ordered the Sixth Fleet to conduct exercises in the area to defend freedom of the seas. “We weren’t going to allow him to declare squatter’s rights over a huge area of the Mediterranean in defiance of international law,” Reagan said. When Qaddafi sent warplanes into international airspace to enforce his “line of death,” the U.S. Navy responded with deadly force.

Given the havoc Iran could wreak with the global economy by closing the strait, the objective today should be to keep the strait open through deterrence rather than kinetic military action. This requires the president to speak to the issue directly and unambiguously.

To be sure, the U.S. Fifth Fleet has declared that disruptions of the vital transit route “will not be tolerated.” Secretary of Defense Leon Panetta adds, “The United States will not tolerate blocking of the Straits of Hormuz.” And The New York Times reports that Washington is “relying on a secret channel” to warn Tehran that closing the strait “would provoke an American response.” Now it’s time for the president to make clear that the security of the Strait of Hormuz is not a tactical matter for theater commanders, or something to be outsourced through third-party channels, but a strategic interest of the United States.

In short, the president needs to articulate a “Hormuz Doctrine,” making it clear that any attempt to disrupt international commerce flowing through the Strait of Hormuz or to deny freedom of navigation in this vital international waterway will be regarded as an attack on the strategic interests of the United States—and will be repelled by any means necessary.

The president doesn’t need to define what the response will look like, but he needs to put Tehran on notice that it will not be permitted to hold hostage the world’s energy supplies.

Of course, keeping the Strait of Hormuz open requires more than words. It also requires actions, as the Navy well knows.

To its credit, the administration has ordered naval assets into the strait from time to time, is keeping two carriers in the area and has sent counter-mine assets to the region.

However, America and the world are different than when Reagan put Tehran on notice: First, the global economy is not nearly as resilient. A spike in oil prices triggered by open hostilities in the strait could send teetering economies back into recession. Second, Iran’s military packs a stronger punch than in the 1980s. And third, although the U.S. Navy remains a powerful force, it is being asked to do more with less than its 1980s counterpart. At the height of the Reagan buildup, for example, the U.S. Navy boasted 594 ships. Today’s fleet numbers 285 ships.

These numbers have real-world implications. After Tehran raised the specter of closing the strait, CENTCOM Commander James Mattis requested a third aircraft carrier to send a strong deterrent signal. His request was denied because the extra carrier was needed elsewhere.

That was precisely the wrong message to send Tehran.