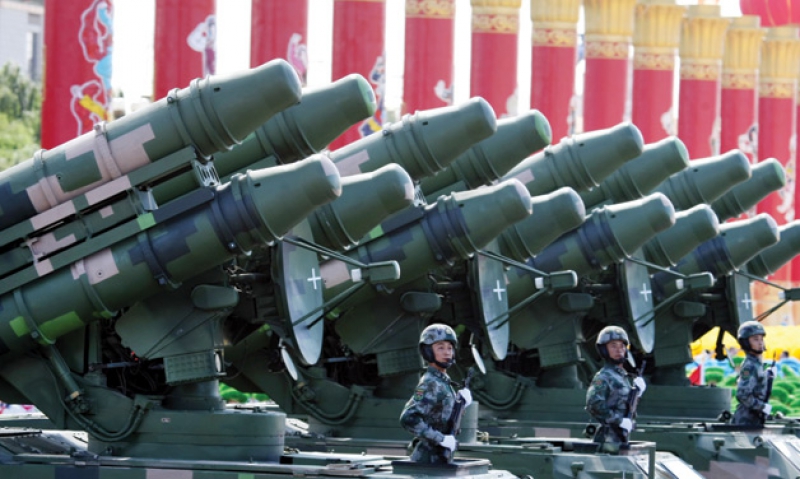 In 2009, President Barack Obama proposed “spheres of cooperation” between the United States and China, and insisted that “the United States does not seek to contain China.” Four years later, the administration is in the midst of carrying out a “Pacific pivot” aimed at, well, containing China. Given Beijing’s words, deeds and capabilities, reorienting U.S. force posture toward the Asia-Pacific region makes sense. The question is: Does the Pentagon have the tools to deter a rising China and thus make the “Pacific pivot” work?

The short answer is probably not.

“This pivot is undercut,” the Heritage Foundation’s Bruce Klingner and Dean Cheng conclude, “by the fact that the U.S. military lacks the resources necessary to implement such a strategy.”

Washington has lopped off $487 billion from the Pentagon, including cuts to the Air Force (286 planes), active-duty Army (80,000 soldiers) and Marine Corps (20,000 Marines). All of these cuts come before sequestration, which still hangs over the Pentagon like a guillotine.

By definition, sea power is an essential element of the “Pacific pivot.” But the Navy’s prognosis is not good when it comes to readiness and acquisition. The Navy has been forced to stretch the “build time” of new aircraft carriers from five to seven years, and recently had to seek a special congressional waiver to deploy just 10 carriers (rather than the legally mandated 11). Commander of Naval Surface Forces Vice Adm. Tom Copeman concedes that the ships in the surface fleet “don’t have enough people, don’t have enough training, don’t have enough parts, and don’t have enough time to get ready to deploy.” And today’s fleet numbers just 285 ships. By way of comparison, when President Bill Clinton dispatched two carrier battle groups to calm Beijing’s tantrum in the Taiwan Straits in 1995-96, the fleet totaled 375 ships. At the height of the Reagan buildup, the fleet boasted 594 ships.

China, on the other hand, isn’t cutting anything from its military. Beijing boosted military spending by 11 percent in 2012. The growth in military spending by China in the past decade is staggering: from $20 billion to as much as $180 billion. China now deploys 79 principal surface combatants and 50 submarines. According to the Pentagon’s latest report on China’s military power, Beijing is pouring increasing sums into cruise missiles, bombers, submarines and sea-skimming missiles capable of attacking ships from 1,500 kilometers away, “particularly aircraft carriers in the western Pacific Ocean”—assets focused on countering American sea power.

Yet given the capabilities of the U.S. military, the balance of power would still seem to favor the United States—that is, until one considers that America’s military assets and security commitments are spread around the globe, while China’s are concentrated in its neighborhood.

Speaking of China’s neighborhood, Beijing is flexing its military muscle in the oil-rich South China Sea, intimidating the Philippines, Japan and Vietnam with military maneuvers, air-space and sea-space violations, and outlandish territorial claims. Beijing recently earmarked $1.6 billion to build piers and airfields on islands long claimed by the Philippines.

Worryingly, Beijing’s rhetoric matches its bellicose behavior and buildup. “We must insist on using battle-ready standards in undertaking combat preparations, constantly enhancing officers’ and troops’ thinking about serving in battle, and leading troops into battle and training troops for battle,” declares China’s newly-minted leader, Xi Jinping. “And we must insist on rigorous military training based on the needs of actual combat.”

Note the focus on “battle” and “combat” but no mention of “defense.”

That explains why China’s neighbors are so nervous—a factor that actually enhances the “Pacific pivot.” Indeed, Washington’s renewed focus on the Pacific is shared by some of America’s strongest allies. Japan, Australia, the Philippines, Thailand and others are all rising to China’s challenge:

While these developments serve to augment the “Pacific pivot,” the key to deterring China’s military impulses and preventing what Churchill called “temptations to a trial of strength” is American military might. A Pentagon report noted in 2008 that China has “deep respect for U.S. military power.” But with the United States in the midst of massive military retrenchment, one wonders how long that reservoir of respect will last.

“We’ll have those who attempt to exploit our vulnerabilities, if we’re required to cut too much,” warns Army Chief of Staff Gen. Raymond Odierno. “They will challenge our credibility and they could miscalculate.”

Odierno’s words, especially in conjunction with Xi Jinping’s, remind us that there’s a price to keeping the Pacific peaceful—and that it’s a price worth paying.