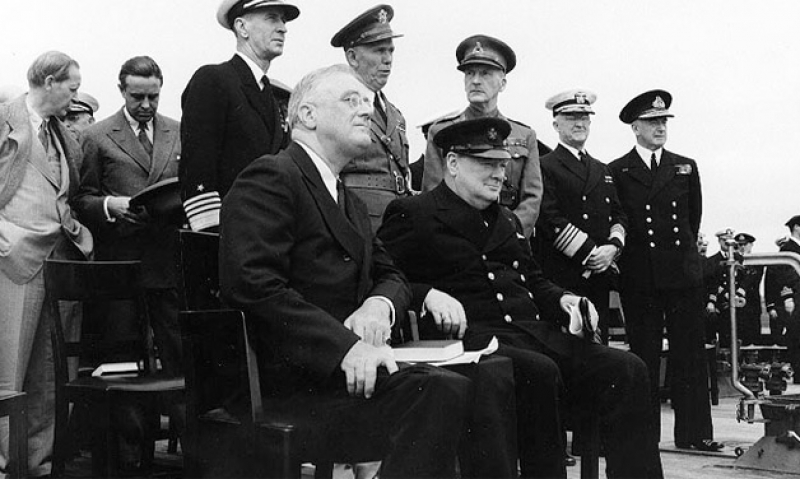 After his summit with President Franklin Roosevelt in August 1941, Winston Churchill told the House of Commons that Britain and the United States “will have to be somewhat mixed up together in some of their affairs for mutual and general advantage.”  He envisioned joint military bases, “common study of potential dangers,” and “interchange of officers and cadets.” He even mused about “common citizenship” for Americans and Brits.

Before exploring the growing depth of the special relationship, let’s look at its breadth—its historical underpinnings.

Although the two countries had a fitful history—going to war in the late 1700s, early 1800s and nearly again in the early 1900s—the foundation of close collaboration was always there. Teddy Roosevelt, for example, said the British and Americans are “akin…in feeling and principle.”

Pushed by those shared principles, the U.S. bankrolled the British in World War I. The U.S. and Britain began exchanging intelligence about Japan in 1937. And as Britain fought alone against Hitler, FDR opened the “great arsenal of democracy” so that Churchill might keep his island nation alive.

Churchill knew America paid a price for focusing on the Atlantic. “If the United States have been found at a disadvantage at various points in the Pacific Ocean,” he said after Pearl Harbor, “we know well that it is to no small extent because of the aid you have been giving us.”

As if to consecrate the U.S.-U.K. bond, FDR’s personal envoy to Britain, Harry Hopkins, rose during a dinner with Churchill and quoted from the Book of Ruth: “Whither thou goest I will go, and whither thou lodgest I will lodge. Thy people shall be my people, and thy God my God,” he declared, dramatically adding, “even to the end.” Churchill wept openly.

During the war, Churchill set up a Joint Staff Mission in Washington, D.C., as a liaison to the U.S. military. FDR’s military liaison to Churchill was the Supreme Allied Commander, Gen. Dwight Eisenhower. Indeed, the pairings of presidents and prime ministers underscore the common bonds and common history: Churchill and FDR, Churchill and Truman, Churchill and Ike, Reagan and Thatcher, Clinton and Blair, Blair and Bush.

Together, Britain and America shaped the postwar world—rescuing West Berlin from Stalin, building NATO, defending Korea. By the mid-1950s, they agreed, in the words of a Pentagon memo, to “coordinate the atomic strike plans of the United States Air Force with the Royal Air Force” and share “atomic bombs in the event of general war.”

Thanks to Anglo-American resolve, the Cold War was won without those bombs ever falling.

As Britain and America braced for another kind of war, in Kosovo, Prime Minister Tony Blair recalled Hopkins’ toast during a summit with President Bill Clinton. This time, it was the American leader who wept.

When war came to America’s shores, Blair rushed to America’s side. “America has no truer friend than Great Britain,” President George W. Bush declared in a speech to a joint session of Congress just days after 9/11. Fittingly, Blair was on hand, sitting beside the First Lady.

Through the smoke, blood and controversy that followed 9/11—through three prime ministers and two presidents—Britain and America have stood together.

Asked “Where’s your payback from this relationship,” Blair once answered, “My payback is the relationship.”

For Washington, Britain provides a bridge to Europe and the essential ingredient to virtually every diplomatic and military endeavor in which the United States engages—from liberating Kuwait and Kosovo in the 1990s; to fighting terror in Afghanistan, toppling tyranny in Iraq and building an international missile defense in the early 2000s; to countering piracy, liberating Libya, restraining Iran’s nuclear ambitions and securing the Strait of Hormuz today.

That brings us back to the depth of the special relationship.

Trying to husband its military resources ahead of the F-35’s arrival, Britain sold its entire fleet of Harrier jump jets to the United States. Not coincidentally, British pilots are flying with U.S. squadrons to maintain their proficiency until the F-35s are ready. In fact, British pilots are flying operational missions from U.S. aircraft carriers.

In 2012, the British and American navies began collaborating on aircraft-carrier interoperability. So, perhaps in the not-too-distant future, a U.S. F-35 will take off from an American carrier and refuel on a British carrier.

In the event that Scotland chooses full independence (a referendum is set for 2014) and decides to boot Britain’s nuclear submarines from Scottish bases, Britain is contemplating the use of a U.S. submarine base in Kings Bay, Ga., as a backup. Already, British subs regularly port at Kings Bay to offload and reload Trident D-5 missiles. In fact, some facilities at Kings Bay fly both the Stars and Stripes and the Union Jack.

Those who feel uncomfortable with such a cozy basing relationship should remember that a number of U.S. assets nest at British bases—F-15s at RAF Lakenheath, combat-support units at RAF Alconbury, Special Ops C-130s and intelligence-gathering RC-135s at RAF Mildenhall, and missile-defense radars at RAF Fylingdales—and that Britain allows the U.S. military to maintain bases on the British territory of Diego Garcia. All told, some 9,000 Americans are stationed in the U.K., and 800 Brits are stationed in the U.S.

Moving from defense cooperation to policy coordination, the two allies have formed a National Security Strategy Board to “develop a shared view of emerging challenges [and] how we should deal with them,” according to Prime Minister David Cameron’s office. Co-chaired by the British and U.S. national security advisers, the group meets several times annually to coordinate foreign policy.