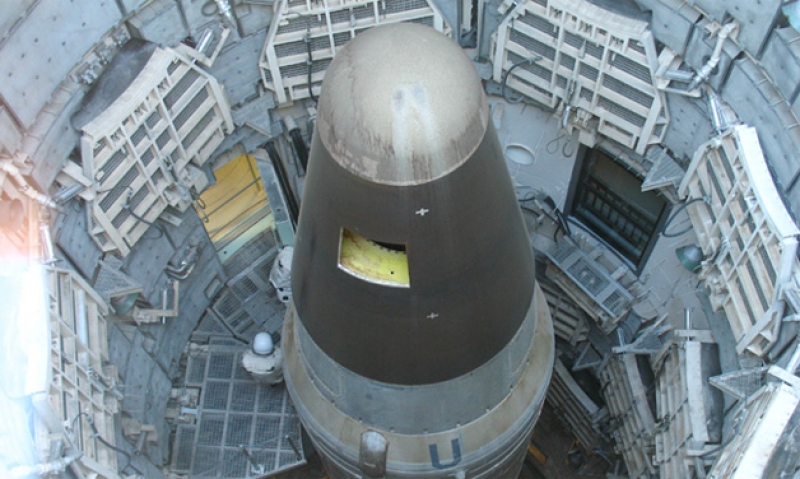 After signing the New START Treaty in 2010, which will cut the U.S. deterrent arsenal down to 1,550 warheads by 2018, President Barack Obama recently outlined a plan for “reducing our deployed strategic nuclear weapons by up to one-third” in order to achieve “the security of a world without nuclear weapons.” According to the president, “so long as nuclear weapons exist, we are not truly safe.”

The president’s goal is admirable, but his premise and path raise questions.

To be sure, these are terrifying weapons. That’s precisely why they have been so effective at preventing great-power conflict. It’s no coincidence that before the advent of the Bomb, some 76 million people died in two global wars between 1914 and 1945—or that there have been no global wars in the 68 years since.   In short, nuclear weapons have paradoxically kept the peace between nuclear powers. Along the way, they have promoted stability, enhanced American security and bolstered American primacy.

That may explain why the next commander of U.S. Strategic Command, Adm. Cecil Haney, said during a recent Senate hearing that he opposed further unilateral cuts. In fact, Gen. Kevin Chilton, Commander of Strategic Command 2007-11, suggested in 2010 that the New START reductions were about as low as the United States should go deterrence-wise, noting, “The arsenal that we have is exactly what is needed today to provide the deterrent.”

But a one-third reduction from New START levels would whittle America’s deterrent arsenal down to about 1,000 strategic nuclear weapons. To put that number in perspective, the U.S. currently deploys 1,654 active strategic warheads, down from 2,500 in 2010. The last time the U.S. deterrent arsenal numbered just 1,000 nuclear warheads was 1952, when the U.S. had a 20-to-1 advantage over the Soviet Union.

The strategic environment of 2013 is very different:

A U.S. strategic arsenal of 1,000 warheads may be enough to deter a resurgent Russia, or a rising China, or a Talibanized Pakistan, or a nuclear Iran, or an ICBM-armed North Korea. But is it enough to deter all of these strategic pressures all at once?

As a recent Legion resolution noted, quoting a high-level general officer, “Deterrence is not a fading construct in national security.”

Indeed, a precipitous reduction in the U.S. nuclear deterrent could invite at least three destabilizing developments.

First, China could recognize that it is within striking distance of becoming a nuclear peer of the United States. Opening the door to a third nuclear superpower—one with the means and motives to seize such an opportunity—seems unwise.

Second, other nuclear states and threshold states could realize that if they acquire, maintain and/or increase their nuclear stockpiles, their relative strength will increase as America’s strategic arsenal decreases.

Third, countries that depend on the U.S. nuclear umbrella—Japan, South Korea, Australia, allies in Europe and the Middle East—could start to doubt America’s ability to deter regional bullies. In fact, Tokyo and Seoul are already contemplating their own nuclear deterrent. Doubtless, this is related to the opposite trajectories of the U.S. arsenal and the Chinese and North Korean arsenals.

Moreover, it pays to recall that America’s Cold War nuclear arsenal was primarily focused on deterring Moscow’s advantages in conventional forces. When Nikita Khrushchev warned President Dwight Eisenhower about the Red Army’s overwhelming conventional edge in the event of another crisis in Germany, the steely American commander-in-chief fired back, “If you attack us in Germany, there will be nothing conventional about our response.”

The Cold War is over, but Moscow still enjoys certain conventional-force advantages over America’s European allies and still war-games invading—and even nuking—them.

Different Pathways
To be sure, the president is in good company when it comes to his goal of a nuclear- free world.

Winston Churchill conceded that his preference to a balance of terror was “bona fide disarmament all round.” However, after decades of dealing with dictators, he warned, “sentiment must not cloud our vision.” And so he called on freedom-loving nations to pursue “defense through deterrents,” adding, “but for American nuclear superiority, Europe would already have been reduced to satellite status.”

Noting that the world “lives under a nuclear sword of Damocles,” President John Kennedy counseled that these weapons “must be abolished before they abolish us.” Yet Kennedy was a realist: to deter Moscow, America’s nuclear arsenal grew by 16 percent during his presidency.

President Ronald Reagan, too, longed “to see the day when nuclear weapons will be banished from the face of the earth.” Indeed, he pursued the idealistic goal of eliminating nuclear weapons; he just went about in very practical way, which brings us back to the pathway to nuclear disarmament.

First, Reagan revived America’s military power. Because he knew, as Churchill once said of the Soviets, “there is nothing they admire so much as strength,” Reagan built up with the hope of one day building down. (The strategy worked: Reagan hammered out the first treaty that actually eliminated an entire class of nuclear weapons.)

Second, Reagan never allowed the allure of treaties—he dismissed unverifiable treaties as “paper castles”—to trump the substance of treaties. Because he understood that any treaty is only as good as the character of the parties that sign it and knew that Moscow tended to—ahem—fudge, Reagan’s mantra was “Trust but verify.”

Third, Reagan began building a credible defense against nuclear weapons. Because he knew “the genie is already out of the bottle,” he wanted an insurance policy—a global shield against missile attack. “What if free people could live secure in the knowledge that…we could intercept and destroy strategic ballistic missiles before they reached our own soil or that of our allies?” he asked. “This could pave the way for arms control measures to eliminate the weapons themselves.”

Note the sequence here: robust missile defenses would be in place before nuclear disarmament.

Today, it seems Washington is trying to do the opposite. Not only are sequestration cuts eroding the U.S. conventional deterrent—after sequestration, warns former Defense Secretary Leon Panetta, “We would have the smallest ground force since 1940, the smallest number of ships since 1915 and the smallest Air Force in its history”—but missile-defense spending has been slashed. As a result, America’s missile defenses are a skeleton of what they need to be to provide adequate insurance in a world without a U.S. deterrent.

To be sure, the world has changed in many ways since Reagan offered his roadmap to a day without nukes. But the value of the nuclear deterrent has not.