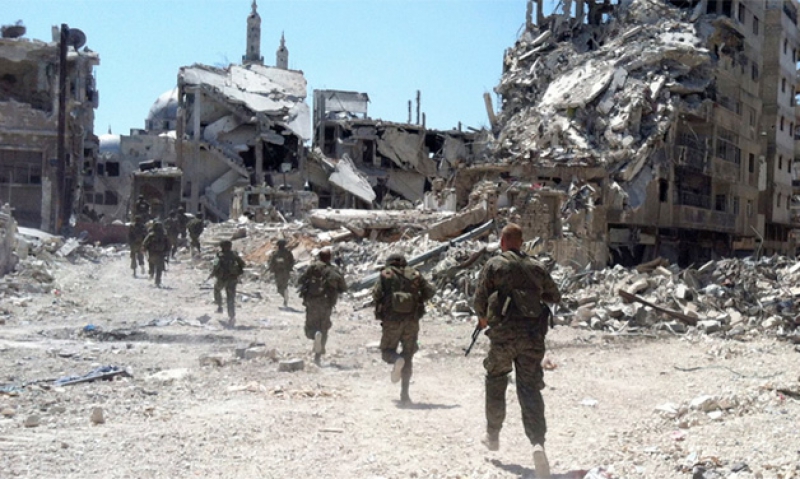 “No easy matters will ever come to you as president,” a grizzled departing president warned his young successor. “If they are easy, they will be settled at a lower level.”

If ever there was proof of President Dwight Eisenhower’s timeless counsel to President-elect John Kennedy, it’s the crisis in and around Syria. After all, more than 100,000 people have been killed in Syria’s brutal civil war. Scud missiles and cluster bombs are raining down onto population centers. The war is metastasizing across international borders, with Jordan and Turkey drowning in a tidal wave of some 2 million refugees, Syrian dictator Hafez Assad’s forces firing into Jordan and shooting down a Turkish plane, Israel launching airstrikes into Syria, Iran sending equipment and men to Syria via Iraq, Hezbollah fighters moving in from Lebanon, and al Qaeda fighters moving back and forth from Iraq. Perhaps worst of all, Assad has re-opened the Pandora’s Box of chemical warfare.

In short, Syria is “no easy matter.” But the president’s erratic response—drawing “red lines” then not enforcing them, calling for Assad’s ouster then sending only nonlethal aid to Assad’s opponents, vowing to punish Assad for gassing his people then promising it would be “a very limited…shot across the bow,” requesting congressional authorization then withdrawing the request—hasn’t made it any easier.

Interests and Ideals
For more than two years, the president tried to keep Syria at arm’s length, and understandably so. Americans have no stomach for another war in the Middle East, which explains why the president has worked hard to disentangle the United States from the region. Witness the pullout from Iraq, drawdown in Afghanistan, lead-from-behind approach to Libya, and pilotless drone war over Pakistan and Yemen.

Not only is this approach politically understandable; it is historically justifiable. Indeed, many thoughtful observers have made the case that after some 20 years of U.S. military interventions (e.g. Kuwait, Iraqi Kurdistan, Somalia, Bosnia, Haiti, Kosovo, Afghanistan and Iraq), it’s time for Washington to return to a less hyperactive foreign policy—the sort of interests-based policy that guided the United States during the Cold War.

But the longer the war raged in Syria, the more difficult it was for the president to avert his gaze from it. Syria is not just another “quarrel in a far-away country, between people of whom we know nothing,” as was said during an earlier time of troubles. Syria is affecting close allies like Israel, Turkey and Jordan—see above—and serving as fuel for determined foes like al Qaeda, Hezbollah and Iran. Nor is the world the same as it was during the Cold War. What’s happening in Syria—as before in Somalia and Bosnia—is being beamed around the world in real time, crying out for a response from the one country with the military means and moral standing to do something.

It could be argued that the president’s effort to stay out of Syria was undermined by the president himself. Recall that in announcing his decision to intervene in Libya’s civil war in 2011, he declared, “We cannot stand idly by when a tyrant tells his people that there will be no mercy…where innocent men and women face brutality and death at the hands of their own government.”

A strong case could be made for staying out of both civil wars on interests/realist grounds. A strong case could be made for intervening in both civil wars on humanitarian/idealist grounds. There is even a way to bridge the gap between ideals and interests in Syria: Like West Berlin in 1948 and Afghanistan in 2001, Syria may have been one of those unique instances where humanitarian ideals and national interests overlap. Early intervention to protect the Syrian people (a humanitarian motivation) by targeting the Assad regime could have dealt a blow to Syria’s patron in Iran, blocked jihadists from gaining a toehold and prevented Assad from using or losing his chemical weapons (all national-security interests).

But sounding like Vaclav Havel in making the case for intervening in Libya while acting like Henry Kissinger in steering clear of Syria is difficult to square.

On Hold
The use of chemical weapons is what spurred the president into action last month, and for good reason. More than 1,400 civilians were killed in the Damascus suburb of Ghouta by sarin gas. The footage from Ghouta shocked the civilized world. After all, these ghastly weapons have been used only five times since the end of World War I.

The importance of reinforcing the taboo against chemical weapons—and slamming shut Pandora’s Box—cannot be overstated. The president rightly concluded that Assad’s use of chemical weapons “poses a serious national security threat to the United States and to the region,” that “a failure to stand against the use of chemical weapons would weaken prohibitions against other weapons of mass destruction, and embolden Assad’s ally, Iran,” and that “it is in the national security interests of the United States to respond to the Assad regime’s use of chemical weapons through a targeted military strike.” Such a strike, the president explained, would “send a clear message not only to the Assad regime, but also to other countries that may be interested in testing some of these international norms.”

But the president undermined himself again by delaying such a response and then asking Congress for pre-authorization to strike Syria. Make no mistake, seeking congressional authorization for military action—something the much-maligned Bush administration did before Afghanistan and Iraq, but the Obama administration did not do before Libya—is the preferable way to go to war. However, the political handholding leading up to congressional authorizations for the Gulf War in 1991 and Iraq War in 2003 underscore that persuading Congress requires time and effort. And other precedents—Reagan in Grenada, the elder Bush in Panama, Clinton in Kosovo, Obama himself in Libya—underscore that congressional authorization for a Syria strike was not essential.

At first glance, the Russian proposal to cajole Assad into rounding up and handing over his chemical weapons may look like a way to deescalate the crisis. Some observers describe it as an “off ramp” from the crisis. However, Moscow’s plan is not likely to bear real fruit as long as the civil war continues—just how would an international force secure tons of chemical weapons amid a multisided war?—which suggests the proposal may be more of stalling tactic than a solution. Indeed, upon closer inspection, the Russian proposal is something like asking a serial killer to hand over his bullets, letting him keep the gun, allowing him to avoid prosecution and prison time, and trusting one of his accomplices to hold the ammo for safekeeping.

Still, we shouldn’t miss one important lesson amidst all the smoke and confusion created by Moscow’s diplomatic flashbang: The fact that Russia even proffered the idea—and Syria so eagerly embraced it—is proof that diplomacy backed by the threat of force works. Indeed, it may be the only thing that works with autocrats. After all, Russia and Syria were recalcitrant until the last week of August, when Washington finally bolstered two years of warnings with a credible and highly visible threat to carry out punitive military strikes against Assad—strikes that have now been put on hold.

Let’s hope this off ramp doesn’t lead to a dead end for U.S. credibility, because as Secretary of State John Kerry said after the gassing of Ghouta, “It matters if nothing is done.”