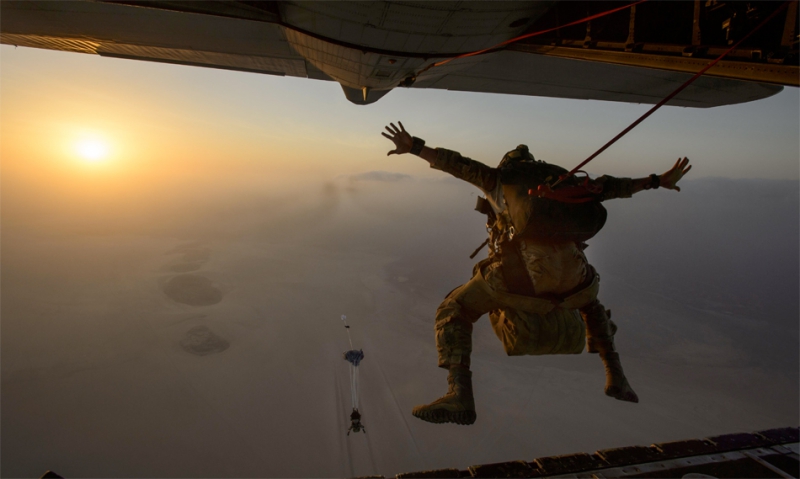 To justify maritime military spending, Navy advocates often note that 71 percent of the earth’s surface is covered by oceans—and understandably so. The U.S. Navy plays an essential role in keeping vital sea lanes open for commerce—90 percent of global trade is carried by sea—and keeping bad guys at bay by projecting America’s deterrent military strength into the world’s toughest neighborhoods. But the Air Force is politely reminding policymakers and the public that 100 percent of the planet is covered by air. That’s worth keeping in mind in this era of sequestration and budget austerity—especially given the central role American air power has played in the post-Cold War world.

Today’s Air Force can reach out and touch any point on the globe with a kind of speed, precision and lethality that is arguably unmatched, as we have seen repeatedly in the past quarter-century. Just think of the major U.S. military engagements since the fall of the Berlin Wall.

Air Force assets were among the first units deployed during Desert Shield in 1990. The first six weeks of Desert Storm were almost exclusively an air affair, famously followed by a “hundred-hour ground war” and then a decade of air-suppression missions. Indeed, the term “no-fly zone” was born at the conclusion of Desert Storm. The first Bush administration needed a way to protect the Kurds of northern Iraq from Saddam Hussein’s postwar vengeance without mounting another large-scale ground operation, so the Air Force created a new kind of blockade—on the fly, as it were—one guarded from the air. All told, U.S. air assets launched more than 500 airstrikes in support of no-fly zones in Iraq. Air power had rewritten the rulebook for war.

The Clinton administration tasked the Air Force with enforcing no-fly zones in the hopes of protecting Bosnian civilians from Slobodan Milosevic’s henchmen. But it wasn’t until the Air Force was allowed to take the offensive against Serbian militiamen in 1995 that Milosevic finally came to the peace table. Air power had ended a war.

Four years later, when Milosevic tried to repeat in Kosovo what he had perpetrated in Bosnia, the U.S. Air Force led NATO in a 78-day bombing campaign targeting Milosevic’s army and other regime centers of gravity. When the U.S. Air Force was finally stabled, Milosevic’s regime was mortally wounded and 850,000 Kosovar refugees returned home. Air power alone had waged and won a war.

Iraq would continue to present a security challenge for the United States into the second Bush administration, and the Air Force would be a workhorse throughout the war that finally toppled Saddam’s regime. F-117s fired the opening salvos of Operation Iraqi Freedom, hitting a hideout of regime leaders. Importantly, such precision strikes were a hallmark of the second Gulf War. As the Center for Strategic and Budgetary Assessments detailed after the collapse of Saddam’s regime, “of the roughly 29,000 bombs and missiles dropped by U.S. forces, nearly 70 percent were smart.” To underscore how effective the Air Force was, CSBA notes that of the 800 tanks Saddam’s Republican Guard fielded at the outset of the war, “all but a couple of dozen” were destroyed by air strikes or abandoned within the first 21 days of fighting.

“First on the scene in 1990, the Air Force was also last out of Iraq,” Air Force Magazine poignantly noted, explaining how USAF provided reconnaissance, airlift, personnel recovery, air defense and convoy protection “until every departing American was safely out.”

We all know that after 9/11, the Air Force launched the first counterstrikes against al Qaeda and its patrons and partners in Afghanistan, as B-1s and B-52s carried out nighttime raids against dozens of terror targets on the first night of Operation Enduring Freedom. But some of us forget that immediately after 9/11, the Air Force and Air National Guard began scouring America’s skies for threats. The combat air patrols continue to this day—out of sight and out of mind for most of us.

During the Obama administration, the share of the national-security load shouldered by the Air Force has arguably increased, as manned and unmanned assets carry out operations in Libya, Mali, Central African Republic, Somalia, Afghanistan, Pakistan and Yemen.

But USAF’s most important role is not kinetic operations, but rather deterring war: When China unilaterally declared an air-defense identification zone in late 2013, Washington sent a flight of B-52s into the area to enforce freedom of the skies. When North Korea began threatening war in early 2013, Washington deployed F-22s to South Korea and sent B-2s on unusually—and purposely—high-profile maneuvers over the peninsula.

Similarly, in the Air Force equivalent of gunboat diplomacy, B-52s flew to Australia, F-22s deployed to Guam and Japan, and B-2s were dispatched to Alaska in 2009 to send a message to jittery friends and bellicose foes. B-2s also made an eyebrow-raising flyover of the North Pole in 2011. (Doubtless, Moscow got the message.) Likewise, during a spike in tensions with Iran in 2012, the Pentagon based a number of F-22s in the UAE.

Worryingly, sequestration is whittling away at America’s multitasking Air Force and its deterrent strength.

These cuts might make sense if USAF had a surplus of shiny, new airframes or if peace were breaking out around the world. But we know the very opposite to be true. The bomber fleet has shrunk from 173 in 2003 to 144 today, the fighter/attack fleet from 1,628 to 1,289, the tanker fleet from 325 to 246. And the entire fleet is aging.

As to the state of the world, the Middle East is on fire; Egypt is in a dangerous spiral of re-revolution; al Qaeda is reconstituting in North Africa, Yemen, Iraq and Syria; North Korea is rattling nuclear sabers; Iran is racing ahead with its own nuclear-weapons program, albeit covertly. And these, it could be argued, aren’t even our principal worries. As the U.S. declaws itself, China’s military spending skyrocketed from $20 billion in 2002 to $180 billion a decade later—an unparalleled jump on a percentage basis. Russia has unveiled plans for 2,300 new tanks, 600 new warplanes and 28 new submarines in the next 10 years.

Today’s Air Force keeps a watchful eye on DMZs and dictators, carries life-saving pallets to the forgotten and friendless, delivers justice to America’s foes, protects America’s friends and defends America’s interests. But with fewer airmen, fewer planes, less modernization and less training, tomorrow’s Air Force will have a shorter reach and a smaller role in the world—and so will the United States.