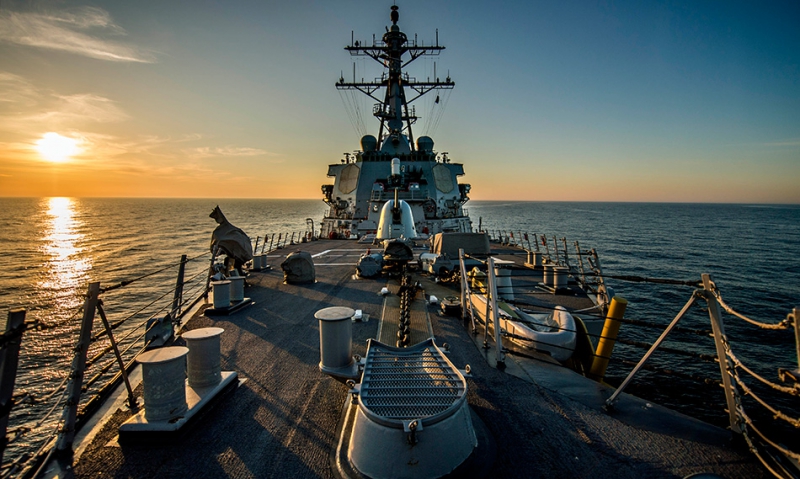 China now deploys some 79 principal surface combatants, 55 submarines, 55 amphibious ships and 85 missile-equipped fast boats. Russia’s once-rotting navy is experiencing a renaissance of sorts—with plans for 50 new warships, eight new nuclear subs, French-built amphibious assault ships and homegrown aircraft carriers in the works. Iran’s navy ushered in 2014 by launching its first voyage to the Atlantic—this on the heels of the Iranian naval chief’s threat that closing the Strait of Hormuz would be “easier than drinking a glass of water.” All the while, the Arctic is opening up; piracy plagues coastal Africa; and the East and South China Seas are turning into a cauldron. These are just fragments of the threat environment facing America’s Navy. Yet all Washington can think about is cuts.

That gap has real-world implications: After Tehran raised the specter of closing the Strait of Hormuz, CENTCOM requested a third aircraft carrier to send a strong deterrent signal. That request was denied because the carrier was needed in the Pacific. Halfway around the world, USCG deploys only two operational polar icebreakers—one of which is a medium-duty vessel tasked largely to scientific missions and the other of which has exceeded its 30-year lifespan. Russia deploys 25 polar icebreakers.

“Our historic dominance,” concedes Adm. Samuel Locklear, chief of Pacific Command, “is diminishing.” Vice Adm. Tom Copeman, commander of Naval Surface Forces, suggests that the ships in his fleet “don’t have enough people, don’t have enough training, don’t have enough parts and don’t have enough time to get ready to deploy.” Indeed, according to a Pentagon report, just 45 percent of the Navy’s deployed aircraft are combat ready, and one in five ships are deemed less than satisfactory or unfit for combat.

While Washington whittles away at the big stick, Beijing isn’t cutting anything from its military. On a percentage basis, the growth in military-related spending by China since 2000 is staggering: from $20 billion to as much as $215 billion. Beijing is using these resources to deploy aircraft carriers, bombers, submarines and sea-skimming missiles. As the Pentagon concludes, China wants “to become the preeminent Asian power.” That presents a problem for the current preeminent Asian power: the United States.

Yet given the U.S. Navy’s technological edge, the balance of power would still seem to favor the United States—that is, until we consider that China’s military assets and security interests are concentrated in its neighborhood, while America’s are spread around the globe.

Contrary to those who want America to turn inward, none of this is new. As a trading nation and a coastal nation, America was destined to be a maritime power. Writing in The Federalist Papers, John Jay envisioned a day “when the fleets of America may engage attention.”

When U.S. ships were harassed by Barbary pirates, President Thomas Jefferson opted to take the fight to the enemy, declaring, “It will be more easy to raise ships and men to fight these pirates into reason, than money to bribe them.”

President Theodore Roosevelt’s “big stick” was the U.S. Navy, which he wielded adroitly to serve U.S. interests in the Caribbean, Pacific and Mediterranean. In his biography of TR, Edmund Morris recounts the story of Ion Perdicaris, who was kidnapped by a Moroccan warlord. Upon his release, as he approached the coastal city of Tangier, Perdicaris caught the first glimpse of the source of his regained freedom: “the mastheads of Admiral Chadwick’s ships.” Overcome with emotion as he took in the U.S. armada, Perdicaris whispered a quiet prayer of thanks for “that flag…that people…that president…those frigates.”

Without “those frigates,” the American people will find the world a much more difficult and dangerous place.