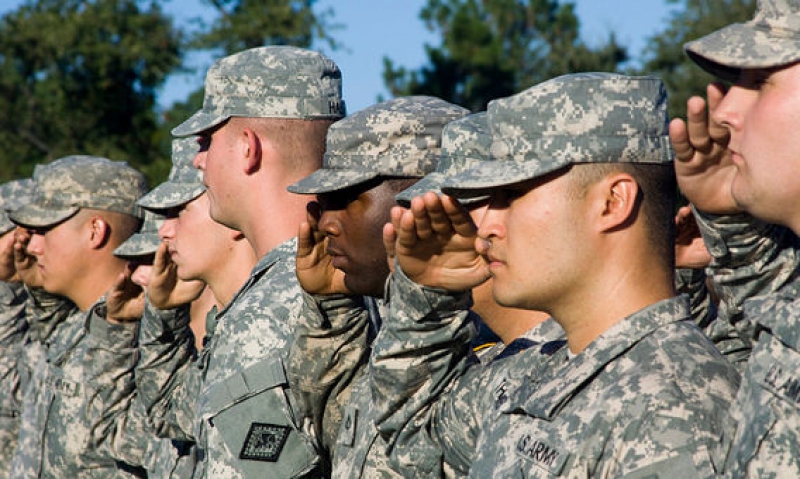 When it comes to deterring revisionist bullies like Vladimir Putin and paranoid wildcards like Kim Jong Un, containing rising powers like China, supporting fragile nations like post-Taliban Afghanistan, ousting death-wish dictators like Saddam Hussein, and reassuring nervous allies like the Philippines, Korea, Poland and Jordan, there’s no substitute for boots on the ground. Regrettably, the U.S. Army is running out of soldiers to fill those boots.

As the Lexington Institute’s Loren Thompson details, the Army is eliminating 12 of 45 brigade combat teams and surrendering some 800 helicopters (including active and reserve components).

The consequences of an Army with fewer resources and fewer soldiers are glaring and grim. According to Army Chief of Staff Gen. Ray Odierno, today’s Army has “the lowest readiness levels” since he entered the service 37 years ago. He bluntly warns of “significant problems” if troops are deployed for combat during Washington’s dangerous bipartisan sequestration experiment. “They are not going to be trained properly. That means when they go, it is going to take them longer to do it. They might have more casualties.”

Pentagon documents leaked to USA Today indicate that sequestration will produce an Army at “high risk to meet even one major war.” In fact, the Pentagon concluded in April that “our forces will assume substantial additional risks in certain missions and will continue to face significant … modernization challenges.”

The maddening – and frightening – aspect of this cutting and scrimping is that it follows a decade (1990-2001) when, as the House Armed Services Committee notes, “The active-duty Army was cut from 18 to 10 divisions on the assumption that America would not need to commit large numbers of troops on the ground for long periods of time.” Yet that’s exactly what the Army was asked to do in Afghanistan and Iraq.

Costs. Among the few organs of ground power to escape sequestration’s guillotine are Special Operations forces, which are expected to grow from 66,000 to 69,700. But even Adm. William McRaven (commander of Special Operations Command) would concede that his commandos are not built for deterrence, the sort of mission at which the modern Army excels. Known as “quiet professionals,” McRaven’s men are ghosts; they specialize in stealth and do most of their work in the shadows. Deterrence is usually about the very opposite – being seen, having presence, standing out in the open.

Just as Special Operations forces are ideally suited for quick, kinetic operations against asymmetric foes like al-Qaeda, the regular Army is ideally suited for extended operations focused on deterring regional risks like North Korea and near-peer competitors like Russia and China; striking hard, fast and deep in order to remove a threat and return to the status quo, and if necessary seizing and holding territory.

Indeed, as we enter an era marked by renewed great-power rivalry, it seems the United States will need more of the Army’s unique deterrent capabilities – not less. For instance, it’s natural to think of the “Pacific pivot” – the Obama administration’s containment strategy for China – as a job for the Navy, Marines and Air Force, but it pays to recall that the Army has 60,000 personnel tasked to Pacific Command.

In a similar vein, there’s a reason Poland wants an Army brigade (or two) on Polish soil. Warsaw recognizes, as Maj. Gen. Robert Scales (Army-retired) has noted, “American tanks in Poland [would] send a message to Putin.” The message: crossing this line means war – and you will lose.

Critics of defense spending – well-intentioned but shortsighted – always argue that maintaining an Army capable of deterring aggression is expensive and wasteful. But as President George Washington observed in his farewell, “Timely disbursements to prepare for danger frequently prevent much greater disbursements to repel it.” Just compare military allocations, as a percentage of GDP, during times of war and peace:

Risks. This seems risky given the chaos and conflict buffeting us: “The al-Qaeda threat today is more diverse and more aggressive, with more threat streams than we’ve seen before 9/11,” according to House Intelligence Committee Chairman Mike Rogers (R-Mich.). Mexico is hemorrhaging; North Korea is testing nukes and lobbing artillery shells; Iran is racing ahead with its own nuclear weapons program; the South China Sea is a cauldron. As the United States declaws itself, China’s military-related spending has skyrocketed from $50 billion in 2003 to an estimated $215 billion a decade later.

And then there’s Russia. On the strength of hefty increases in military spending – a 31 percent jump since 2008 – Putin plans to deploy 2,300 new tanks, 600 new warplanes and 28 new submarines in the next decade. Interestingly, 2013 marked the first time since 2003 that Russia spent a higher percentage of its GDP on defense than the United States. This coincided with the withdrawal of the last American tanks from Europe in April 2013 – the first time since 1944 that Europe was left unprotected by American heavy armor. That shortsighted decision sent precisely the wrong message and has been corrected.

To be sure, Putin’s military is a shell of the Red Army. But with his tanks rumbling to life along Russia’s western frontier, he holds the advantage in his neighborhood – and as we have learned in Ukraine and Georgia, retains enough punch to goad his neighbors into compliance, redraw the map and extend his reach.

Does America have enough residual muscle in Europe to deter further Russian revisionism and prevent an accidental war? That the answer is unclear speaks volumes. In this regard, something President Theodore Roosevelt said is sobering: “The United States never learns by experience but only by disaster. Such method of education may at times prove costly.” He offered that assessment in 1914.