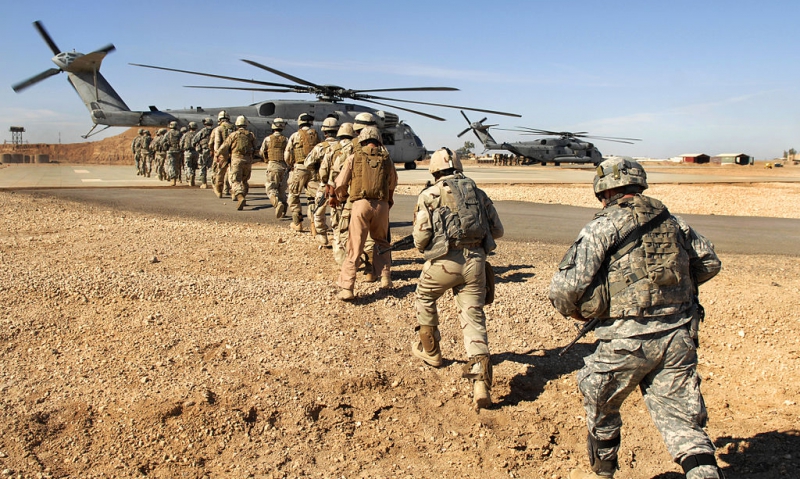 Editor's note: After this story was initially published, the Pentagon has named the operation against ISIS as "Operation Inherent Resolve."

It’s been just over a month since the president vowed “to degrade and ultimately destroy” ISIS - and more than two months since Air Force and Navy platforms launched what the president calls “a systematic campaign of airstrikes against these terrorists” in Syria and Iraq.

To execute this mission, which Pentagon planners predict could last three years, the United States has launched upwards of 4,000 sorties, including more than 240 strike sorties; fired dozens of cruise missiles; deployed 1,600 ground forces (and counting) to Iraq, including headquarters-command elements of the 1st Infantry Division; spent more than $1 billion; and lost at least one Marine in the line of duty. In short, the operation against ISIS is a large-scale, full-fledged, high-stakes military campaign. Yet as of this writing, it still has no operational codename, which leaves lots of observers scratching their heads.

In fact, the lack of a name has caused controversy and invited more than a few jabs. U.S. News and World Report criticizes “Obama’s anonymous war against ISIS.” The German news agency Deutsche Welle questions “the operation with no name” A Washington Post reporter held a contest to draw attention to questions raised by the decision to not name the mission. Dave Letterman sarcastically suggested it might be called “Operation Hillary’s Problem,” and Stephen Colbert devoted a satirical segment to the controversy.

But it’s no laughing matter. As The Hill reports, troops involved in the anti-ISIS campaign “are not eligible for certain medals because the U.S. has not officially designated their efforts a military campaign.” Medal eligibility, The Hill reminds us, “begins with the military campaign being given an official designation and the combatant commander requesting that the operation be approved for awards.”

The overwhelming majority of U.S. military operations since World War II have been given codenames to distinguish them from other missions, define objectives, clarify purpose and even rally public support.

Gregory Sieminski penned a fascinating essay about the evolution of U.S. military codenames for Parameters (the journal of the Army War College) some 20 years ago. “In early 1942,” Sieminski explained, “members of the War Plans Division culled words from an unabridged dictionary to come up with a list of 10,000 common nouns and adjectives that were not suggestive of operational activities or locations.” That same year, the Joint Chiefs of Staff “approved the classified Inter-Services Code-Word Index and gave the War Plans Division the duty of assigning code words.”

Sieminski noted that codenames “were thoughtfully selected from the lists,” especially when Prime Minister Winston Churchill might be involved. “Churchill was fascinated with codenames and personally selected them for all major operations. He had clear ideas about what constituted appropriate names. After coming across several that he considered inappropriate, he went so far as to instruct an aide to submit all future code names to him for approval,” Sieminski discovered. “He dropped his demand when he learned the magnitude of the task, but he did take the precaution of writing down some principles to guide his subordinates.”

These guidelines included avoiding use of “boastful,” “overconfident” or “frivolous” terms, or terms that have “an air of despondency.” Above all, Churchill advised, codename-selectors should use good judgment and common sense: Never should a “widow or mother…say that her son was killed in an operation called ‘Bunnyhug’ or ‘Ballyhoo.’”

In Korea, Gen. Douglas MacArthur “permitted codenames to be declassified and disseminated to the press once operations had begun, rather than waiting until the end of the war,” Sieminski reported, noting how this offered the military “opportunities…for shaping perceptions.”

And that’s the point: These terms help Americans—average citizens, veterans, policymakers, those who defend us downrange - remember something important America achieved or attempted. They can provide cohesion, purpose, focus, even inspiration, which is why the operation against what the president rightly calls a “network of death” deserves a name.

After initially telling reporters, “I know of no plans at this time to name it,” Pentagon press secretary Rear Adm. John Kirby recently said, “There are names being considered for this operation…We believe that the mission now has grown to an extent, to a scope, where perhaps it’s feasible to take a look at naming it.”

It’s about time. After all, the British (Operation Shader), Australians (Operation Okra) and French (Operation Chammal) have given codenames to their contributions to the anti-ISIS fight. There are operational codenames for everything from the effort to fight Ebola (United Assistance), to the counter-piracy mission off the Horn of Africa (Ocean Shield), to the mission to reassure Eastern Europe in the face of Russian aggression (Atlantic Resolve).

Pentagon planners internally floated “Inherent Resolve” as a possible codename for the anti-ISIS campaign earlier this month, but as The Wall Street Journal reports, it was rejected for a variety of reasons: Some Pentagon leaders worried it “didn’t properly evoke the Middle East.” Others “faulted it for failing to highlight the international coalition…Still others simply found it uninspiring.”

But nothing can be more uninspiring than a nameless mission. Set against the backdrop of all the other U.S. operations since World War II—especially in recent decades—a nameless mission seems orphaned from the outset, easily forgotten and perhaps easily abandoned.