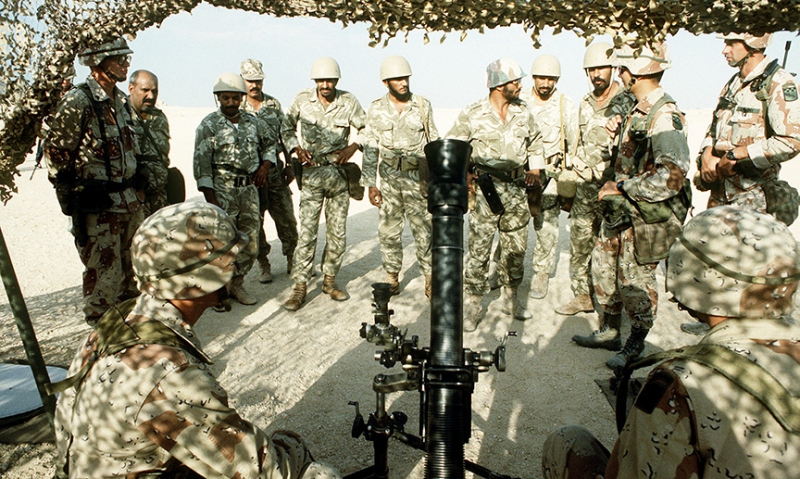 Saudi Arabia sits in the middle of the Middle East. The Saudi kingdom borders the Red Sea and the Persian Gulf. Its next-door neighbors include Egypt, Jordan, Kuwait, Qatar, the UAE, Bahrain, Oman, and the warzones of Yemen and Iraq.

Of course, in a very real sense, the entire region is a warzone: The Egyptian army is fighting pitched battles against jihadists on the Sinai. Israel is never really at peace, but rather waging or waiting for the next war with Hamas or Hezbollah. The Syrian civil war began in 2011, served as feedstock for the rise of ISIS and metastasized across the border with Iraq. In short, Saudi Arabia is surrounded by chaos. And the once-insular kingdom is no longer content to play a behind-the-scenes role in its neighborhood. There are positives and negatives to Riyadh’s coming-out party.

On the plus side, Saudi Arabia is fighting for sovereignty and stability—both inside the kingdom and throughout the region. These are very much in line with U.S. interests.

To fend off the revolutionary regime in Iran, Riyadh has dispatched troops and tanks to bolster Bahrain’s Sunni monarchy in the face of an Iranian-fomented revolt; supported anti-government rebels fighting Bashar Assad’s Iranian-backed regime in Syria; and intervened forcefully in Yemen, after Iranian-supplied Houthi militias tried to take control.

After two decades of military buildup, the Saudis are certainly equal to the task. In 2014, Saudi Arabia became the world’s biggest arms importer. Thanks to Riyadh’s global arms shopping spree, the International Institute for Strategic Studies calls the kingdom the best-equipped military in the Gulf region. The Saudi military deploys 227,000 troops, 600 heavy tanks, 780 light armored vehicles, 1,423 armored troop carriers, 313 fighter-bombers, and an arsenal of air-defense systems.

Riyadh also is spearheading a joint defense force of 40,000 Arab troops. Commanded by a Saudi general, the new force was unveiled during the Arab League summit in March. Egyptian president Abdel Fattah el-Sisi says the force will be focused on “the challenges facing our national Arab security” and “the reasons behind it”—a not-so-vague reference to Shiite Iran’s unwelcomed intervention in Sunni-majority countries and Sunni spheres of influence.

Beyond the battlefield, the Saudis are bolstering Egypt economically. When Egypt’s army moved against the democratically-elected Morsi government in 2013, Saudi Arabia provided political cover and economic assistance to the generals—sending diplomats to lobby Europe and cobbling together a $12-billion aid package for Cairo.

In addition, Riyadh is flooding the global oil market, thus hurting Iran. Known as the world’s gas station for decades, Saudi Arabia sits atop 16 percent of the world’s proven oil reserves, pumps 11.7 million barrels per day and has the capacity to open its oil spigot in response to supply disruptions elsewhere in the world. In short, the stability of Saudi Arabia is a key ingredient to the stability of the global economy. The Heritage Foundation war-gamed an Arab Spring-type revolution leading to prolonged disruption of Saudi oil production. The resulting picture is sobering: U.S. gasoline prices would jump to more than $6.50 per gallon, 1.5 million Americans would lose their jobs and U.S. GDP would drop by $450 billion.

With the U.S. recently emerging as the world’s largest oil producer, some observers ask why an energy-independent America would continue to care about Saudi Arabia and other oil-rich regimes that flout American values. The answer is simple: Since oil is a global commodity and any major disruption in supply affects the entire market of oil consumers, our newfound oil wealth does not inoculate us from the effects of major disruptions.

There also are negatives to Saudi Arabia’s newfound muscularity—or perhaps better said, dangers. By wading so deeply and openly into the Middle East’s wars, Saudi Arabia is exposing itself to a range of threats.

Sunni jihadists represent a serious threat to the kingdom, as evidenced by the foiled al Qaeda attack against Saudi oil fields in 2006 and the repeated calls by ISIS leader Abu Bakr al-Baghdadi for attacks against the Saudi leadership. By striking ISIS inside Syria, the Saudis are no longer protected by the plausible deniability that once shrouded the kingdom’s involvement in regional security matters.

The ISIS threat helps explain Riyadh’s decision to build a 600-mile barrier and deploy an estimated 30,000 troops along the Iraq border.

However, the kingdom faces threats from within as well. What the Carnegie Endowment’s Frederic Wehrey calls “the forgotten uprising” has triggered a “deadly cycle of demonstrations, shootings and detentions” in eastern Saudi Arabia, where Shiites are concentrated. Smashing Shiite militias in Yemen will likely enrage Shiite minorities in the kingdom—and spur Iran to funnel more aid their way.

Riyadh is reaping the whirlwind not only for internal repression, but also for the support Saudi-based religious leaders and individuals have given to jihadist groups. According to State Department cables leaked in 2010, “Donors in Saudi Arabia constitute the most significant source of funding to Sunni terrorist groups worldwide” and “a critical financial support base for al Qaeda, the Taliban, LeT and other terrorist groups.” (LeT is a Pakistani jihadist group.) Wealthy Saudis bankrolled ISIS early on. Riyadh has made such donations illegal. Even so, about 8 percent of the Islamic State’s fighters—some 2,500 men—are Saudi. That’s the most of any country outside Iraq and Syria. A country whose population underwrites and backfills ISIS is not healthy.

Why has Riyadh become so openly activist in recent years, and what can or should the United States do about it?

It could be argued that U.S. intervention in the region as well as U.S. withdrawal from the region fueled Riyadh’s newfound assertiveness. Here’s how.

By toppling Saddam’s military dictatorship, Washington removed one of the main checks against expansion of Iranian influence. This is not to say that eliminating Saddam’s ghastly regime was wrong. But postwar Iraq was not strong enough to serve as a bulwark against Iran, and postwar Iraq’s Shiite leadership was not inclined to do so in any event. That meant something had to fill the role Iraq had played since the 1979 Iranian revolution. The Gulf Arab states lacked the demographic heft to match Iran. Egypt lacked the geographic placement. And by 2008-09, the United States lacked the will.

U.S. withdrawal from Iraq in 2011, among other things, opened the window of opportunity for Iranian mischief in the region. The chaos of the Arab Spring further widened that window. Washington’s standoff approach to Syria, lead-from-behind approach to Libya, drawdowns in Iraq and Afghanistan, and halfhearted, almost-grudging intervention against ISIS provide every indication that the United States is no longer interested in playing the role of default stabilizer. And so, the Saudis are stepping into the breach and trying to fill the vacuum. Because we share common foes and common interests, we should support them.

This is not hypocritical or new. It’s pragmatic, and it’s the nature of U.S. statecraft. Stalin’s USSR was not America’s friend, but it was the quintessential enemy of our enemy. So, America collaborated with one brutal totalitarian dictator to defeat another brutal totalitarian dictator. Likewise, waging the Cold War sometimes meant making common cause with unsavory regimes. We were the good guys, to be sure, but we worked with our share of bad guys.

Working with the enemies of our enemies to achieve national-security goals is difficult for an idealistic nation like ours. The American people are not particularly comfortable with realpolitik or the cold, calculating actions it demands. But sometimes it’s the only option.