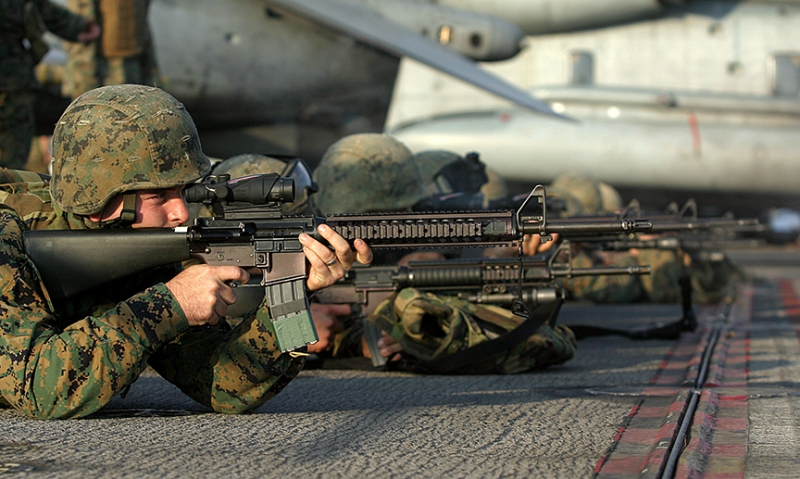 The Joint Chiefs of Staff recently released their National Military Strategy (NMS), concluding that “global disorder has significantly increased while some of our comparative military advantage has begun to erode…We now face multiple, simultaneous security challenges from traditional state actors and trans-regional networks of sub-state groups.” From the big picture to the close-ups, it’s a sobering document.

“China’s actions are adding tension to the Asia-Pacific region,” according to the NMS. “Its claims to nearly the entire South China Sea are inconsistent with international law,” and its “aggressive land reclamation efforts… will allow it to position military forces astride vital international sea lanes.”

Labeling Iran “a state-sponsor of terrorism that has undermined stability in many nations,” the NMS bluntly declares that Iran’s revolutionary regime has “brought misery to countless people.”

The NMS concludes that North Korea’s nuclear-weapons program and ballistic-missile technologies “directly threaten” South Korea and Japan. “In time, they will threaten the U.S. homeland as well.”

According to the NMS, al Qaeda and the Islamic State (ISIS) are “radicalizing populations, spreading violence and leveraging terror to impose their visions” on the Middle East.

Add to this tally what Director of National Intelligence James Clapper recently said about cyberspace—“Cyber threats to U.S. national and economic security are increasing in frequency, scale, sophistication and severity of impact”—and it’s fair to conclude that the global order America helped build is under sustained assault from all directions.

Although the policymakers seem oblivious, the NMS offers a road map through this time of troubles. Among the signposts:

But sequestration is dismembering the very force the Joint Chiefs say they need. Defense spending is 3.2 percent of GDP—headed for just 2.8 percent of GDP by 2018. The last time America invested so little in defense was 1940.

Even as Washington whittles away at the big stick, China’s military spending has jumped 170 percent the past decade, Russia’s 108 percent. Given what Russia has done in Georgia and Ukraine, and what China has done in the South China Sea and cyberspace, these adversaries seem anything but deterred.

Several national-security policies have undermined the Pentagon’s ability to achieve this objective, including the aforementioned bipartisan gamble known as sequestration.

On the frontlines of the war on terror, there can be little doubt that pulling out of Iraq and pulling back in Afghanistan have made it more difficult to defeat ISIS and al Qaeda.

Withdrawing from Iraq in 2011 provided fertile ground for the rise of ISIS. Recall that Gen. Lloyd Austin recommended keeping 20,000 troops in Iraq after 2011. But the White House demanded that any follow-on stabilization force operate under a status-of-forces agreement blessed by the Iraqi parliament, rather than simply signed by the Iraqi government. When Baghdad balked, as Frederick Kagan, one of the architects of the surge, reports the White House went forward with the zero option “despite the fact that no military commander supported the notion that such a course of action could secure U.S. interests.”

Remarkably, Washington is in the process of repeating the same mistake in Afghanistan, as the administration plans to remove all U.S. troops from the very place that spawned 9/11 by the end of 2016. None other than Gen. David Petraeus warns, “We have no realistic way to deal with threats in this region without bases in eastern Afghanistan.”

“Airpower needs to be applied like a thunderstorm, and so far we’ve only witnessed a drizzle,” explains Gen. David Deptula, who led the initial air campaign in Afghanistan.

The results leave much to be desired. ISIS controls an area the size of Costa Rica. ISIS and al Qaeda franchises can be found in Iraq, Syria, Yemen, Egypt’s Sinai, Libya, Somalia, Afghanistan and Nigeria. Clapper recently called 2014 “the most lethal year for global terrorism in the 45 years such data has been compiled.” There are 41 jihadist-terror groups in 24 countries today—up from 21 groups in 18 countries in 2004.

“Strengthen our global network of allies and partners”

When the president ignored his own red lines after Syria’s Bashar Assad used chemical weapons, military partners in France and Saudi Arabia were left out on a limb. When France asked for help fighting jihadists in Mali, Washington sent Paris an invoice for U.S. air support. When Ukraine asked for weapons to defend itself, Washington sent MREs. When the Arab Spring slammed into Egypt, Washington initially supported Hosni Mubarak (America’s longtime autocratic ally), then supported Mohamed Morsi (Egypt’s first democratic president), then supported a military coup that ousted Morsi.

The strategic environment of today is very different than that of 2010: The Russia of 2015 is far more adversarial. Vladimir Putin recently unveiled plans to deploy 400 new ICBMs. China (with an estimated arsenal of 250-600 warheads) and Pakistan (100-120 warheads) are adding warheads to their arsenals. North Korea now has 20 nuclear warheads; Beijing expects Pyongyang to double that by next year. And then there’s Iran.

With much fanfare, Tehran has made a deal with the West promising to halt progress toward a nuclear weapon. But it pays to recall that this deal demands no change in Tehran’s support for terror, leaves Tehran’s bristling arsenal of missiles untouched, allows Tehran to continue enriching uranium, does not open Iran to unfettered inspections and enables Iran to remain a threshold nuclear power. Even supporters of the deal concede that it will allow Iran to remain “one year away from nuclear weapons ‘breakout’ levels” of enriched uranium, as The Washington Post reports.According to Sen. Bob Menendez (D-N.J.), “We have gone from preventing Iran having a nuclear ability to managing it…The deal doesn’t end Iran’s nuclear program—it preserves it.” A day after the Iran deal was unveiled, Gen. Paul Selva, vice chairman of the Joint Chiefs of Staff, said he “would put the threats to this nation in the following order: Russia, China, Iran.”

It’s a matter of simple arithmetic: The U.S military cannot carry out a growing list of missions—deterring Russia in the Baltics and China in the Pacific, fighting ISIS and al Qaeda, defending freedom of the seas, protecting North America, NATO, South Korea and Japan, quarantining Ebola in West Africa and piracy in East Africa—with fewer resources.

For example, when President Obama ordered warplanes from USS George HW Bush to blunt the ISIS advance into Iraq, CNO Adm. Jonathan Greenert admitted “they stopped their sorties” over Afghanistan to do so. When Tehran threatened to close the Strait of Hormuz, CENTCOM’s request for an extra aircraft carrier was denied because it was needed elsewhere.

The Asia-Pacific region will be left unprotected by a U.S. aircraft carrier for some four months this year. Navy Cmdr. William Marks concedes, “The Navy is not scheduled to provide a continuous carrier presence in some operating regions in fiscal year 2016.”

April 2013 marked the first time since 1944 American heavy armor was not on European soil. That shortsighted decision sent precisely the wrong message and was corrected in February 2014. Now, with Russia’s revived army rumbling along NATO’s eastern flank, Washington is scrambling to increase deterrent military assets across Europe.

The Pentagon chiefs warn, “We will not realize the goals of this 2015 National Military Strategy without sufficient resources.” That brings us back to sequestration. Some of the consequences of sequestration are already on display.

So perhaps the NMS is more than a picture of “global disorder.” Perhaps the Pentagon is sending policymakers a kind of distress signal. Let’s hope the White House and Congress don’t ignore it.