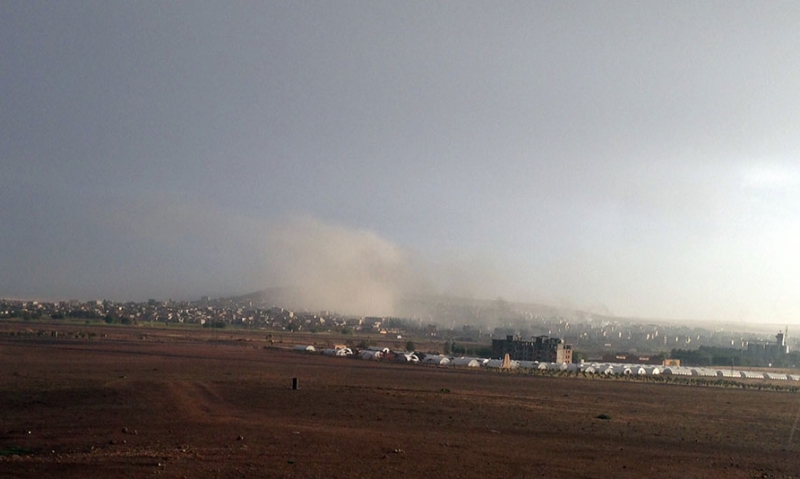 “From the start,” President Barack Obama said of the Islamic State (aka ISIS and ISIL), “our goal has been first to contain, and we have contained them.” That was on Nov. 12, 2015. A day later, the terror superpower launched a series of attacks across Paris, killing 130 people. Three weeks later, a jihadist couple – described by ISIS as “martyrs” and “supporters” – massacred 14 Americans in San Bernardino, Calif. As Joint Chiefs Chairman Gen. James Dunford bluntly concluded last month, “We have not contained ISIL.”

In fact, since October, ISIS has been responsible for 525 murders in six countries outside its self-styled caliphate spanning Iraq and Syria. The Paris siege (130 killed) followed a bombing in Ankara (102 killed), the takedown of a Russian airliner over the Sinai (224 killed) and the bombing of a Beirut market (43 killed). After Paris came the bombing of a bus in Tunis (12 killed) and then the San Bernardino massacre (14 killed).

Moreover, ISIS continues to hold 26,000 square-miles of territory and operate a quasi-government centered around Racca, in north-central Syria. It commands, controls and inspires forces in the field from Syria to the Sinai to San Bernardino. It threatens U.S. allies in Iraq, Turkey, Jordan, Saudi Arabia, Egypt and Israel, and attracts footsoldiers to its death creed. In fact, the number of foreigner fighters aligned with ISIS in Iraq and Syria has doubled in the past 18 months, with as many as 31,000 people from 86 countries now fighting under the ISIS banner.

Calling ISIS “the most immediate threat to U.S. national interests,” Defense Secretary Ashton Carter emphatically concludes, “We’re at war.” The FBI has 900 ISIS-related investigations underway in all 50 states. According to The New York Times, ISIS has “manufactured rudimentary chemical warfare shells” and is aggressively pursuing a chemical-weapons capability.

Add it all up, and ISIS is arguably stronger now than al-Qaida was in September 2001.

Even though the American people and the president would like to “turn the page” on more than a decade of war, that’s simply not an option because, as Gen. Jim Mattis explains, “No war is over until the enemy says it’s over.”

However, we can prosecute this war more effectively. “Airpower needs to be applied like a thunderstorm, and so far we’ve only witnessed a drizzle,” explains Gen. David Deptula, who led the initial air campaign in Afghanistan. He argues that “excessive procedures … are handing our adversary an advantage.”

The numbers amplify his point.

Fifteen months into the anti-ISIS air campaign, 75 percent of warplanes were still returning to base without releasing their weapons. The average number of strike sorties per day against ISIS is 11, with an average of 43 weapons releases per day.

By way of comparison, Russian officials report that their air force – not known for power projection since the collapse of the Soviet Union – launched 2,300 missions over Syria in a 48-day span. That translates into about 47 per day. And in late 2014, the decrepit Syrian air force conducted 210 airstrikes in the span of 36 hours. To be sure, quality and precision are often more important than quantity when applying kinetic force, but there are benefits to quantity, as Americans know from previous air campaigns.

• The average number of strike sorties per day in the early phases of Operation Iraqi Freedom was 596, with 1,039 weapons releases per day. Saddam Hussein’s regime collapsed in 20 days.

• The average number of strike sorties per day in the early phases of the post-9/11 Afghanistan campaign was 86, with 230 weapons releases per day. The Taliban regime was swept from Kabul in five weeks.

• The average number of strike sorties per day during the Kosovo War was 183, with 364 weapons releases per day. Slobodan Milosevic withdrew his troops from Kosovo and sued for peace after 78 days.

• The average number of strike sorties per day in the Gulf War was 976, with an average of 6,163 weapons releases per day. The Iraqi military – at the time one of the largest armies in the world – was routed and in full retreat after just 42 days.

In short, contrary to Obama’s contention that the choice is between either the current approach or being “drawn once more into a long and costly ground war in Iraq or Syria,” there is a tried-and-true method for taking apart ISIS. It would rely on U.S. joint tactical air controllers (JTACs) on the ground to identify targets and guide ordnance onto the enemy, and feature high-tempo, high-yield airstrikes from multiple directions and multiple platforms striking across the enemy’s entire strategic depth. It would also coordinate closely with indigenous friendly forces on the ground.

With “optimal use of air power,” Deptula contends, “The Islamic State can be decomposed through a comprehensive and robust air campaign designed to: (1) terminate its expansion, (2) paralyze and isolate its command-and-control capability, (3) undermine its ability to control the territory it occupies, and (4) eliminate its ability to export ¬terror.”

The president doesn’t deserve all the blame for what Col. Kenneth Allard, former dean of the National War College, calls “18 months of … part-time bombing.” Where is Congress? It has been talking about passing an authorization for military force for more than a year, and still the troops and the nation wait. That is an abdication of Congress’ co-equal wartime responsibilities.

To counter the myth that Islam is under attack, U.S. policymakers must hammer home the facts. No matter what the jihadists say – no matter what the confused peoples of the postmodern West have been taught in school or told by the media – Islam is not under attack and the United States is not at war with Islam. After all, in the past quarter-century, the United States has defended Muslim Saudi Arabia, freed Muslim Kuwait and rescued Muslim Kurdistan. It has fed Muslim Somalia, ended the bludgeoning of Muslims in Bosnia, protected Muslims in Kosovo, and freed Muslim Afghanistan, Muslim Iraq and Muslim Libya from horrific regimes. U.S. troops have bled and died with Kurds, Kuwaitis, Saudis, Iraqis and Afghanis – Muslims all. The U.S. military, which includes thousands of Muslims, has shielded Sunnis from Shiites and Shiites from Sunnis, rushed aid to Muslim Indonesia and Muslim Pakistan after natural disasters of biblical proportion, and cleared a pathway back to civilization for Iraq and Afghanistan.

If this record doesn’t convince Muslim-majority nations that the United States is not at war with Islam, that Islam is not under attack, what will?

As President Obama observes, with understandable exasperation, “The United States is chastised for meddling in the region, accused of having a hand in all manner of conspiracy. At the same time, the United States is blamed for failing to do enough to solve the region’s problems and for showing indifference toward suffering Muslim populations.”

To counter the message that ISIS is on the attack and its ultimate victory is inevitable, Bakr al-Baghdadi and his henchmen must be utterly destroyed – not contained. To achieve that end, policymakers first must equip America’s military with the tools necessary to wage and win America’s wars (see above), and then they must unshackle America’s military.

Until and unless that happens, ISIS will continue to attract followers, massacre civilians, sow chaos, murder Americans and threaten U.S. interests. But if and when that happens – if and when the U.S. military is cleared to go on the attack – ISIS will go the way of bin Laden and Zarqawi, the Taliban tyranny and Saddam’s regime, Hitler and the Nazis, Yamamoto and the kamikazes.