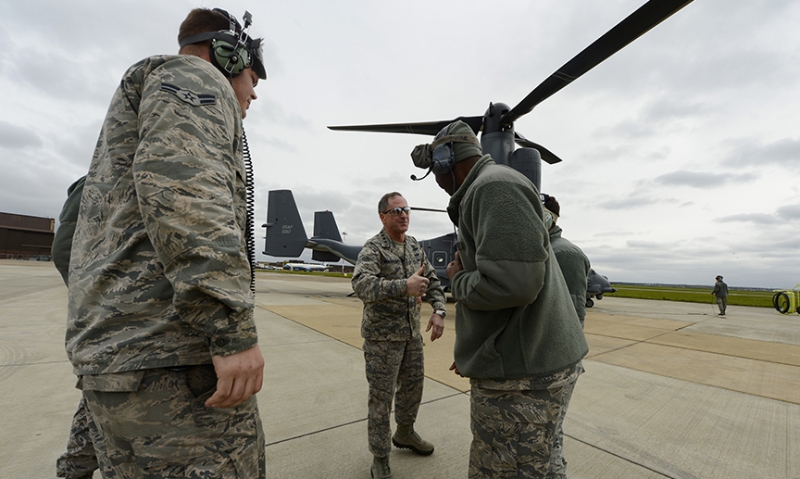 “Today’s Air Force is both the smallest and oldest it has ever been.” So begins a recent report presented by Air Force leaders to Congress.

“Since Operation Desert Storm in 1991, the Air Force cut its total aircraft inventory from 8,600 to 5,452,” according to Secretary of the Air Force Deborah Lee James and Gen. Mark Welsh, Air Force chief of staff.

To add some texture to these retirement dates: The F-15 was built to have a service life of 5,000 flight hours, as Military.com reports, but with life-extension upgrades the airframe is now expected to fly some 18,000 hours. (The plane that could have taken over much of the burden shouldered by the F-15 and the F-16 – the F-22 – was phased out in 2009, less than halfway through its planned production run.)

It gets worse. “When the Cold War ended, the Defense Department terminated production of the B-2 and ceased development of new bombers for the first time since the 1920s,” the Lexington Institute reports. “As a result, the U.S. has not developed a new heavy bomber in three decades.” Initial operational capability of the yet-to-be-built B-21 Long Range Strike Bomber will not come until 2025. Between now and then, just 12 percent of America’s aging bomber fleet will have “the survivability to penetrate and survive current enemy defenses,” according to Lt. Gen. James Holmes and Lt. Gen. Arnold Bunch Jr.

Add it all up, and today’s Air Force “is the smallest and oldest it has ever been,” according to James and Welsh. “In at least one Air Force family,” they point out, “three generations of airmen have piloted the (B-52) Stratofortress.”

In one sense, this is a credit to the design and durability of the airframes, as well as to the hard work and creativity of the crews that keep them airworthy. But in another sense, this is wrong. It’s wrong to put off development, to delay recapitalization, to order those who defend us to make do with planes their grandfathers – and, soon, their great-grandfathers – flew.

Fielding an antique and shrinking Air Force wouldn’t be wrong or worrisome if peace were breaking out around the world, but a glance at the headlines reveals the very opposite: The Middle East is on fire. ISIS, al-Qaeda and their jihadist brethren are on a mission to redraw the map and reorder the world. Russia is on the march. Europe is on edge. China is on the rise.

In each instance – and in many others – the Air Force is an essential part of America’s response: The Air Force is doing the heavy lifting in the fight against ISIS and its affiliates in Iraq, Syria, Libya and Somalia. The Air Force continues to conduct kinetic operations and support missions in Afghanistan. NATO’s reassurance mission in the Baltics relies on Air Force tactical fighters and strategic bombers. The Air Force is conducting ongoing deterrence operations over Korea and the Arctic, along with freedom-of-maneuver and freedom-of-navigation operations over the South China Sea. After the Ebola epidemic struck in western Africa, the Air Force transported 5,500 passengers and 8,700 tons of cargo in a four-month-long continuous airlift. Last year, Air Force assets flew 295,000 hours in support of overseas contingency operations.

In short, America’s Air Force is the very tip of the spear. But thanks to sequestration, the spear is growing duller by the day.

In 2013, the Air Force stood down 31 squadrons due to sequestration’s funding constraints. That number included 13 combat-coded squadrons. “An additional seven squadrons were reduced to flying rates that only enable proficiency in basic tasks, such as takeoff and landing,” according to Welsh.

“The Air Force is currently 511 fighter pilots short of the total manning requirement, and our projections indicate this deficit will continue to grow to approximately 834 by 2022,” senior Air Force officials reported during congressional testimony in March.

James notes that 50 percent of all Air Force combat personnel are “not sufficiently ready” for a “high-end fight” against an opponent with sophisticated air defenses. “A high-end fight is the type of fight where the enemy on the ground can interfere with you, can shoot you down,” James explains. “A high-end fight is a fight where you might go up against integrated air defenses and surface-to-air missiles. We have not been tested in the real world for such a fight for quite some time.”

And Air Force leaders admit their pilots aren’t spending nearly enough time in the cockpit. “Back when I was a young pilot growing up in the ‘80s and ‘90s,” Gen. Herbert “Hawk” Carlisle of Air Force Combat Command recalls, “we used to make fun of the Soviet Union because they only flew 100 to 120 hours a year. That’s what our pilots are flying now.”

As James and Welsh conclude, “24 years of continual combat operations, coupled with constrained and unstable budgets, has taken its toll.” They note that since fiscal 2012 the Air Force has lost $64 billion in expected resources.

All the while, China and Russia have been increasing defense spending. Between 2011 and 2015, Beijing increased military spending 55.7 percent – and 167 percent between 2005 and 2014. Moscow increased military spending 108 percent between 2004 and 2013, and Moscow’s 2015 military outlays were 26-percent larger than in 2014. In short, as Washington engages in massive cuts and drawdowns, Moscow and Beijing are building up and catching up.

In 2012, then-Joint Chiefs Chairman Gen. Martin Dempsey warned that after sequestration, “we wouldn’t be the global power that we know ourselves to be today.”

What’s happening to the Air Force provides a glimpse of what Dempsey feared. Consider these numbers: As of April 5, 2016, the United States has conducted 8,719 airstrikes in Iraq and Syria, which translates into an average of 14 airstrikes per day. By way of comparison, the average number of strike sorties in the early phases of Operation Iraqi Freedom was 596 per day, in the early phases of the Afghanistan campaign it was 86 per day, during the Kosovo campaign it was 183 per day, during the Gulf War it was 976 per day.

Some observers have criticized policymakers for overly constraining the Air Force in targeting ISIS, but perhaps there’s more at work here. Perhaps America’s hamstrung air war against ISIS is a function of its increasingly hamstrung Air Force. Perhaps the post-sequestration Air Force lacks the resources to do what it used to do. “As we have cut our capacity,” James and Welsh conclude, “we have found our capability equally diminished.”