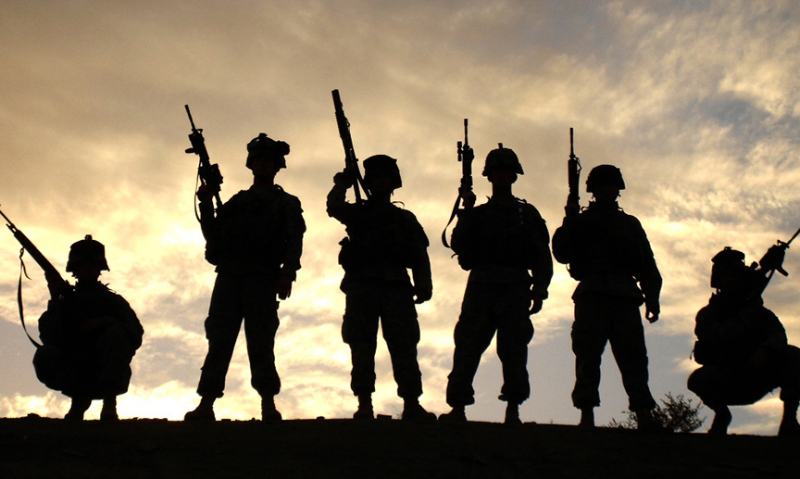 There are always policy debates and political disagreements inside the Beltway. That’s a given in the rough-and-tumble of our republic. What’s unusual is when a Beltway debate is not between Democrats and Republicans, or the legislative branch and the executive branch, but rather within the executive branch. That’s exactly what’s happening as the Obama administration debates whether or not America’s military is at war. The White House says no, while many of President Obama’s top appointees say yes.

The latest example came after Navy SEAL Charles Keating IV was killed in a gun battle with Islamic State (ISIS/ISIL) fighters in the northern Iraqi town of Telskof.

“He was in a firefight, and he died in combat,” Defense Secretary Ash Carter said, with refreshing candor. “This young man found himself in combat and sacrificed for this campaign’s success.”

But the White House took a different position. According to White House Press Secretary Josh Earnest, Keating “was not in a combat mission” but was “engaged in a mission to offer training, advice and assistance to Iraqi forces.” Earnest, however, conceded that Keating “was in a dangerous place” and “doing dangerous work.”

Of course, with those rhetorical contortions, Earnest could just as well have been describing someone who works at a sawmill.

The White House disconnect from its own national-security team – and indeed from what America’s military calls “the long war” – doesn’t end there.

In March, after Marine Staff Sgt. Louis Cardin died from chest wounds sustained when a barrage of Islamic State rockets slammed into a firebase in Makhmur, Iraq, the president dryly reported that Sgt. Cardin “was killed in northern Iraq as we assisted the Iraqi government in dealing with ISIL.” A National Security Council aide described the Marines’ deployment in Makhmur as “very different from the combat mission with forward-deployed maneuver forces of the type we previously conducted in Iraq.”

Yet Carter bluntly said, “It is a combat death.” Marine Corps Commandant Gen. Robert Neller said Cardin “was leading his Marines in combat.”

“We are definitively at war with ISIS,” Secretary of State John Kerry said in April. Joint Chiefs Chairman Gen. Joseph Dunford explained last December that what he and his troops have waged the past 14-plus years “has been war.” Ever consistent, Carter declared last October, “We’re at war ... There are American troops in combat every day.”

With U.S. warplanes, drones, artillery and ground troops striking targets in Syria and Iraq – and U.S. personnel dying – it seems obvious that America is at war.

For example, U.S. combat aircraft have conducted 9,073 airstrikes in Iraq and Syria, delivering some 40,000 bombs on ISIS targets. U.S. personnel – numbering somewhere near 6,000 troops and military contractors – are exchanging fire daily with ISIS. U.S. forces have seized and held airbases in Syria, stood up firebases and FOBs in Iraq, launched ground-based artillery from Jordan into Syria, and fired Tomahawk cruise missiles from warships in the Persian Gulf and the Red Sea.

Moreover, as The Daily Beast reports, there are “at least 12 U.S. generals in Iraq, a stunningly high number for a war that, if you believe the White House talking points, doesn’t involve American troops in combat.” With a publicly-stated ceiling of 5,000 U.S. troops in Iraq and Syria, “There’s a general for every 416 troops ... there are some captains in the U.S. Army in charge of that many people.”

The generals are there because this is a war. Carter, Kerry, Dunford and others are right to call this a war because U.S. troops are fighting, killing and dying.

However, that doesn’t match the White House narrative. The president declared in 2014 that “American forces will not be returning to combat in Iraq” – apparently, no matter what our troops do, no matter what our eyes see. And so, even after confirming that U.S. personnel are coming under enemy fire, returning fire or being killed by enemy fire, Pentagon spokesmen have insisted that “U.S. forces are not in an active combat mission in Iraq.”

This repackaging of war is not new. After all, the Truman administration called the war in Korea a “police action.” The Eisenhower and Kennedy administrations sent “advisers” to South Vietnam. After 9/11, the Bush administration deployed Special Operations units to the Philippines for “counter-terrorism training” that looked a lot like combat. And the Obama administration took pains to call the air war in Libya a “time-limited, scope limited military action.”

What’s unique about the operation targeting ISIS is the high-level internal divisions over whether U.S. troops are at war.

Perhaps this is a function of what the president views as his mandate. He has often noted that he “was elected to end wars, not start them.” He tried to fulfill that mandate by withdrawing U.S. troops from Iraq, drawing down U.S. forces in Afghanistan and erasing his own “red line” when Bashar Assad used chemical weapons in Syria.

Along the way, the administration expunged the “war on terrorism” phraseology from official pronouncements. “The president does not describe this as a ‘war on terrorism,’” then-presidential aide (and now CIA director) John Brennan explained in 2009. In 2011, after the takedown of Osama bin Laden, Obama declared, “The tide of war is receding.” In 2013, he said “core al-Qaeda” was “on the path to defeat.” In 2014, he assured the American people that it was time “to turn the page on more than a decade in which so much of our foreign policy was focused on the wars in Afghanistan and Iraq” and compared ISIS to a “JV team” in “Lakers uniforms.”

Again, all of this was strangely at odds with the views of key national-security figures inside the administration. In 2009, then-CIA Director Leon Panetta declared, “There’s no question this is a war.” In 2010, then-Defense Secretary Robert Gates said, “We are a nation at war.” In 2014, Brett McGurk, President Obama’s envoy to the anti-ISIS coalition, called ISIS “worse than al-Qaeda.” And far from confirming that the tide of war was receding, Gen. Michael Flynn, head of the Defense Intelligence Agency from 2012 to 2014, argued, “We have to energize every element of national power – similar to the effort during World War II or during the Cold War – to effectively resource what will likely be a multigenerational struggle.”

There are 41 jihadist groups in 24 countries today (up from 21 in 18 countries in 2004). Director of National Intelligence James Clapper reports there are more terrorist safe havens today “than at any time in history.” Al-Qaeda is resurging in Afghanistan. ISIS controls some 20,000 square-miles of real estate in the heart of the Middle East, has used chemical weapons, and has branches in Saudi Arabia, the Sinai, Libya, Yemen, Nigeria and Afghanistan. ISIS and its henchmen have murdered 1,440 people in 90 terrorist attacks in 21 countries outside Iraq and Syria (including shooting rampages in San Bernardino and Orlando); and sequestration is shrinking the reach and resources of the U.S. military. Can anyone honestly say Washington is heeding Flynn’s counsel? It’s difficult be on a war footing if half the administration insists we’re not at war.

One thing’s certain: the Navy SEALs in Telskof, the Marines in Makhmur, the commandoes in Syria, the soldiers in Jordan, and the pilots providing close air support know they’re at war.