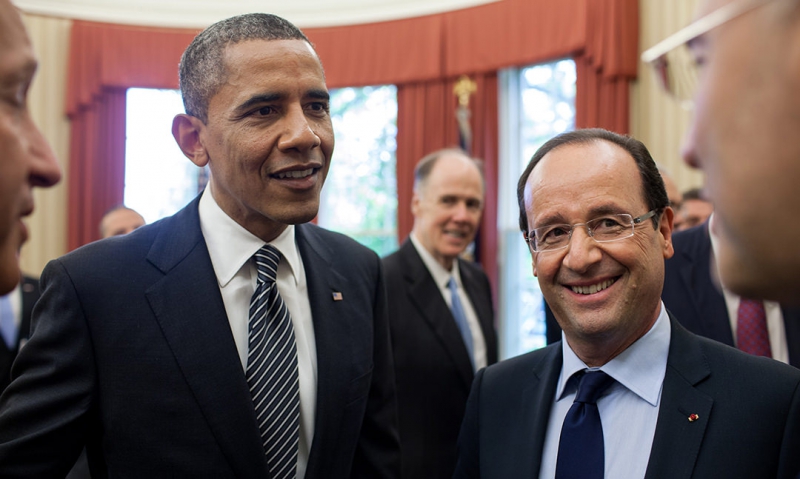 Ever since the recession of 2007-2009, Britain – America’s closest ally – has been pulling back from international commitments. This has created a window of opportunity for France to expand and deepen its often-fitful relationship with the United States.

Today, the United States and France are working together in ways that would have been unimaginable just a decade ago – a time when Washington was deeply wounded by the actions of the French government in the run-up to the Iraq War, a time when Paris seemed intent on turning the European Union into a counterweight to the United States.

With Washington and Paris recognizing their many common interests and common enemies, all of that has been forgiven (if not forgotten). According to the French news agency AFP, “France has nudged aside Britain to become the U.S. military’s key European partner.”

That’s a bit of an overstatement – the Anglo-American partnership is indeed a special relationship unlike any other alliance – but it’s difficult to deny that France has become, in the words of one French military officer, America’s “most activist, most engaged European ally.”

France has some 12,000 troops deployed in military operations around the world – in Iraq, Syria and Lebanon, the Central African Republic, Mali and northwestern Africa, Afghanistan and Djibouti, the Mediterranean Sea and Indian Ocean. And those troops are actively engaged, often in close partnership with the U.S. military.

France, with 38 warplanes committed to the fight, is the second-largest contributor to the anti-ISIS coalition – and for good reason: The Islamic State’s attacks on Paris in November 2015 served as a call to arms for France.

With France galvanized by what French President Francois Hollande called “an act of war,” applications to join the French military spiked after the Islamic State’s siege of Paris. As Bloomberg News reports, “The number of daily applications received by France’s armed forces has tripled since the Nov. 13 terrorist attacks.”

Operating in both the Mediterranean and the Persian Gulf, the aircraft carrier Charles de Gaulle has served as command center for Task Force 50, the component of U.S. Naval Forces-Central Command that plans and conducts coalition strike operations in the Middle East. Plus, France has sent weaponry to Kurdish forces and has deployed troops to train Iraqi forces.

Yet France was engaged in the region long before the attacks on Paris. In 2009, France opened air and naval installations in Abu Dhabi, in what then-President Nicolas Sarkozy called “a sign to all that France is participating in the stability of this region of the world.”

In 2012, Sarkozy led efforts to form the Friends of Syria group to coordinate international support for the anti-Assad rebels.

France, which has weathered three large-scale terrorist attacks in the past 20 months, is deeply engaged in efforts to blunt the jihadist advance across Africa. In 2013, Hollande launched a major military operation in Mali to prevent it from falling to jihadists. Some 4,000 French troops and dozens of warplanes took part, and the U.S. military provided a range of enabling support.

The United States stood up a base in Niger to conduct drone flights over Mali in support of the mission. U.S. C-17s and C-130s delivered hundreds of French troops and thousands of tons of equipment and supplies to Mali. U.S. KC-135 refuelers extended the range of French warplanes. And U.S. intelligence, surveillance and reconnaissance assets were tasked to the operation.

It wasn’t the first time the United States played a supporting role in a French-led military operation in Africa. Whatever one’s opinion of the 2011 war in Libya, one thing is beyond debate: France led the way diplomatically and militarily.

Today, U.S. and French commandos are targeting jihadists on the ground in Libya, and U.S. warplanes are striking from the air.

In 2009, after a 43-year hiatus, France returned to NATO’s integrated military command structure. As a result, a French general now heads NATO’s Transformation Command. And French warplanes this month will take command of NATO’s air-defense/air-policing mission in the Baltics.

But perhaps France’s most important contribution to NATO’s security is something France didn’t do: At high political and economic cost, Hollande scrapped the long-planned sale of two Mistral amphibious-assault ships to Russia.

Hollande’s decision cost France at least $1.33 billion, but it kept lots of high-tech firepower out of Putin’s hands. As The Wall Street Journal reports, “The Mistral can carry some 700 soldiers, four landing craft, 13 tanks and 16 helicopters.” Had the delivery gone through, Russia would have vastly expanded its ability to threaten NATO allies and partners on the Baltic Sea and Black Sea.

In 2009, after U.N. inspectors found that Iran had understated its stocks of enriched uranium and had built an illegal subterranean nuclear facility in the mountains near Qom, Sarkozy challenged the world to get serious.

Sarkozy’s stinging admonition seems just as relevant today, given revelations from the German government in July that Tehran continued “illegal proliferation-sensitive procurement activities” deep into 2015, when the international community was finalizing its dubious nuclear deal with Iran.

In 2015, after the ISIS assault on Paris – the bloodiest attack in France since World War II – Hollande spoke without euphemism or equivocation. Noting that the attack was carried out by “an army” with “financial resources” and “territory,” Hollande declared his country “at war against terrorism.”

That phrase, it pays to recall, was expunged by the Obama administration as it entered office, even though the bipartisan 9/11 Commission concluded, “Calling this struggle a war accurately describes the use of American and allied armed forces to find and destroy terrorist groups and their allies in the field.”

In 2016, after the mass-murder in Nice, French Prime Minister Manuel Valls, quite unlike other Western leaders, leveled with his countrymen: “We could refuse to look reality in the face, forget and move on to something else. But I owe the truth the French people: terrorism will be part of our day-to-day life for a long time.” After the Normandy church attack, he added, “It is a long war which will require resilience and resistance, we need to form a block and stay united.”

In a sense, the attacks in France have brought us full circle: Whether or not we want to admit it, the West is at war with a constellation of states and stateless groups that seek, by murdering innocents, maiming civilization and terrorizing those who oppose their death creed, to overturn the liberal international order established after World War II.

France and America are prime targets for this enemy because both are free; both embrace modernity and pluralism; both defend the far frontiers of civilization.

After the Paris terror attacks, the United States and France expanded intelligence exchanges, allowing “U.S. military personnel to share operational planning information and intelligence with French counterparts,” according to the Pentagon.

It was anything but a first in the post-9/11 era. When the U.S. needed a strategic perch for counterterrorism operations after 9/11, France made room at Camp Lemonnier in the tiny east African nation of Djibouti. Likewise, the United States has made room at CENTCOM for a high-ranking French general.

On multiple occasions since 9/11, France has commanded Combined Task Force 150, a standing multinational maritime force that conducts counterterror operations at sea. France also contributes to Combined Task Force 151, a 25-nation coalition focused on fighting piracy in and around the Indian Ocean. And France is a key member of the Proliferation Security Initiative, an international effort launched by the United States in 2003 aimed at interdicting weapons of mass destruction and related materials bound to and from rogue states and non-state actors.

The Charles de Gaulle – the French Navy’s flagship – has become a symbol not just of French leadership and resolve, but also U.S.-French collaboration:

• As the U.S. Naval Institute details, “In the early days of de Gaulle’s strikes against ISIS, the French carrier was the only one launching planes ... In the absence of an American carrier, Rear Adm. Rene-Jean Crignola, commander of the French Maritime Force embarked aboard Charles de Gaulle, took command of Task Force 50.” CNO Adm. John Richardson said the French strike group “filled an important gap in the capability there in the Gulf.”

• The Charles de Gaulle was under U.S. operational command in 2015. It was a first for the fiercely independent French Navy. U.S. warplanes even landed on the Charles de Gaulle, with the French ship operating alongside the carrier USS Carl Vinson. Likewise, in 2015, French Rafale fighter-jets began operating from U.S. aircraft carriers operating in the Arabian Gulf.

“If we want to contain the risk of conflict, we must defend this right, and defend it ourselves,” Le Drian said. He warned that allowing China to claim international waterways and erode freedom of navigation could set dangerous precedents in the Arctic and the Mediterranean.

“Several times per year, French navy ships cross the waters of this region, and they’ll continue to do it,” Le Drian said, adding that France is committed to “sailing its ships and flying its planes wherever international law will allow, and wherever operational needs request that we do so.”

Given the broader trends in U.S.-French relations, it’s no coincidence that his words are almost identical to those of Defense Secretary Ash Carter, who often notes, when addressing China’s man-made islands and self-declared identification zones, “We will continue to fly, sail and operate wherever international law allows.”

It’s good to hear Washington and Paris reading from the same script.