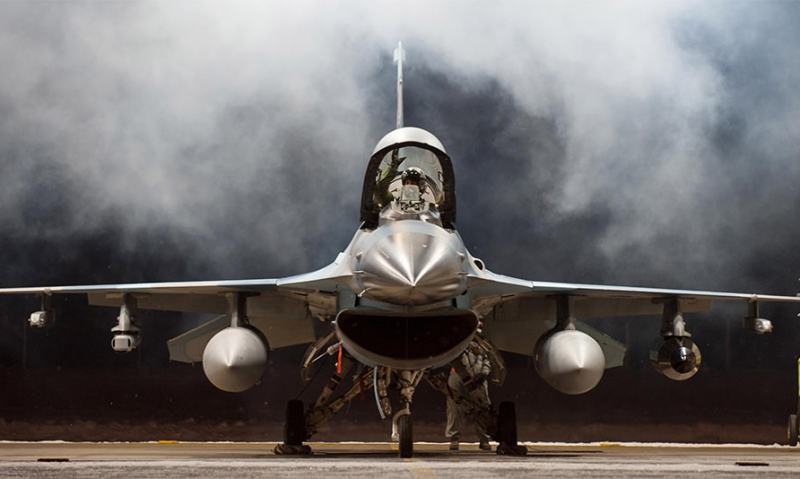 Active-duty crews are flying just 13 hours per crew per month, down from 16 hours per month in 2006. Military.com reports that the Air Force is using “half-size squadrons.”

None of this would be particularly worrisome if China wasn’t asserting control over international airspace and international waters in a blatant military context; if Russia wasn’t reincorporating parts of the Soviet Union, testing NATO air defenses and flying its warplanes throughout the Middle East; if North Korea wasn’t testing nukes and long-range missilery; if Iran wasn’t ambushing U.S. vessels and opening its airbases and airspace to Russian bombers; if ISIS and the Taliban weren’t on the march; if America’s Air Force wasn’t at war.

But it is. Carlisle reminds us of something far too many policymakers forget – and far too few citizens realize: the U.S. military has been globally engaged in combat since Operation Desert Storm, which began in January 1991. Here’s a thumbnail sketch of what the U.S. Armed Forces have been doing since then: Relief missions in Iraqi Kurdistan and Somalia, no-fly zones in northern and southern Iraq, “low grade war” against Saddam Hussein’s WMD program, air campaigns and peacekeeping operations in the Balkans, then 9/11 and Afghanistan, then Iraq, then Libya, then the drone war in Pakistan and Yemen and Somalia, then a return to Iraq (plus Syria) and the war against ISIS, then a return to Libya.

The U.S. flying branch has been at the tip of the spear and an essential element of America’s forward-leaning foreign policy. In 2015 alone, Air Force assets “flew over 295,000 hours in support of overseas contingency operations,” according to a USAF briefing to Congress.

To get a sense of just how busy U.S. air assets are, consider a three-day stretch in September during which U.S. warplanes bombed jihadists in six different countries.

U.S. airstrikes in Afghanistan have spiked this year, as everything from unmanned drones to massive B-52 bombers were called back into the fight. In fact, the number of strike sorties in Afghanistan for 2016 is on track to surpass the 2015 total.

Yet USAF’s most important role is not kinetic operations, but rather deterring war.

China has unilaterally declared an air-defense identification zone over international waters, claimed most of the South China Sea as its own and begun building illegal man-made islands to enforce these claims.

Much of Washington’s response has come from the air: Washington has sent flights of B-52s into the area to enforce freedom of the skies. Likewise, to enforce freedom of the seas, B-52s have overflown the made-in-China islands. In the Air Force equivalent of gunboat diplomacy, B-52s have flown to Australia, F-22s have deployed to Guam and Japan, and B-2s have been dispatched to Alaska. Indeed, as China ratcheted up its response to an international tribunal’s invalidation of its claims over most of the South China Sea, the Pentagon announced that it deployed a package of B-2s to Diego Garcia “to provide consistent and credible air power throughout the Indo-Asia-Pacific region,” as Gen. Lori Robinson, Pacific Air Forces commander, said. B-2s also deployed to Guam in late 2015.

In addition, B-52s, B-1Bs and B-2s teamed up for what the Air Force calls “their first integrated bomber operation in the Indo-Asia-Pacific region.” The exercise marked “the first time all three bombers flew a formation pass over Andersen Air Force Base, dispersed and then simultaneously conducted operations in the South China Sea and Northeast Asia,” according to Pacific Air Forces.

Doubtless, some of these flights were intended to send a message to both Beijing and Pyongyang. Washington has made a habit in recent years of sending B-2s, B-1Bs, B-52s and F-22s on high-profile maneuvers over the peninsula to underscore America’s enduring support for its treaty allies. In 2013, Washington sent B-2s on unusually – and purposely – high-profile maneuvers over Korea. This year, F-22s have deployed to South Korea; B-52s have cruised over the peninsula; and B-1Bs have made an appearance. Air Force officials made a point of noting that the “low-level flight near the DMZ” in September was “the closest a (B-1B) Lancer has ever flown to the border of the Republic of Korea and North Korea.” The episode also marked the first time in 20 years the sleek strategic bomber has landed in South Korea.

As Moscow reverts to its old ways, the Air Force has been called back to the frontlines. After Moscow annexed Crimea in 2014, Washington rushed F-15s and F-16s to the Baltics and Poland; B-52s and B-2s deployed to Britain; and a strike-force of 16 B-52s and B-2s conducted strategic exercises. As part of the “Rapid Raptor” deployments, the Pentagon flew F-22s to Britain, Poland, Lithuania and Romania. B-2s deployed to Britain again in 2015. This past spring, B-52s deployed to Britain and Spain – the third year in row – to support NATO’s Atlantic Resolve operations. The Air Force accounted for 45 percent of the warplanes participating in NATO’s Baltic Operations 16 this past summer. Dozens of U.S. F-15s and F-16s have been dispatched to Poland, Romania, Iceland, the Netherlands, Estonia and Bulgaria for NATO’s “air policing missions.” Finally, the Polar Roar exercises sent B-2s and B-52s on a tour of the Northern Pacific, Arctic and Baltic Sea in August.

Ever since the Berlin Airlift, USAF has played a lead role in America’s humanitarian interventions. The Air Force conducted some 450 humanitarian airlifts during the Cold War, as Daniel Haulman of the Air Force Historical Research Agency has written.

But the needs of the world’s hungry and hurting didn’t disappear with the end of the Cold War. Since 2001, USAF has delivered food, medicine, water, medical personnel and peacekeepers into – and refugees out of – Afghanistan, Lebanon, Haiti, India, Algeria, Sri Lanka, Thailand, Indonesia, Ecuador, Pakistan, the Philippines, Nepal, western Africa , Japan, Uganda, Iraq and even Iran. The list – like the needs of the world’s suffering peoples – is endless.

Contrary to the nation-building-at-home caucus, this isn’t charity work. In fact, it is enlightened self-interest. “The victims of disaster obviously gained from the delivery of food, medicine, clothing, bedding, shelters and other supplies,” Haulman argues. “However, the United States also profited from the airlifts by forging stronger bonds of goodwill and economic interdependence between itself and the afflicted nation, and by contributing to regional stability. Through its airlifts, the Air Force helps to insure friendly regimes in the world that will be receptive to Americans politically, economically and militarily.”

The problem is not that the Air Force and its sister branches play all of those roles on the global stage, but rather that Washington expects them to do so while hacking away at the resources needed to play those roles. And bigger problems loom. China and Russia have not been standing still. “For the first time in decades, our adversaries are closing in on our capability advantage,” Carlisle explains.

Russia, which has been showing off its brand-new Su-34 bombers and Su-35 fighters in Syria, will deploy its first stealth fighter, the T-50, in 2018. “China’s J-20, which resembles the U.S. F-22, started flying in 2011,” The Wall Street Journal reports. “A year later, Beijing began flight trials of the FC-31, a look-alike of the U.S. F-35.” Equally worrisome, Russia and China are deploying sophisticated anti-aircraft systems like China’s HQ-9 and Russia’s S-400, which enable them to limit the U.S. military’s freedom of maneuver.

These factors make stealth aircraft, longer-range standoff capabilities and networked air assets crucial. Yet as detailed above, most of America’s inventory was designed and built in the pre-stealth, pre-networked era. “More than three-fourths of the U.S. fleet of jet fighters,” the Journal points out, “can be traced back to the 1970s.”

What can be done?

Pentagon planners want to convert aging B-52s into unmanned “arsenal planes” that can be slaved to F-22s and F-35s and used to deliver huge amounts of ordnance. They want to fast-track development and deployment of the B-21 bomber. They want to arm U.S. warplanes with directed-energy weapons. That requires more resources.

According to Bob Simmons, staff director for the House Armed Services Committee, the price tag “to put the military back on its feet” after so many years of war and underfunding is “$100 billion a year” over a decade – or $1 trillion.

The next president will have to make that case to the American people. It shouldn’t be difficult in the midst of 25 years of war – and in the face a resurgent Russia and a rising China. “The lead we have is shrinking,” Carlisle warns. “When our means can be challenged, our ability to deter and dissuade washes away.”