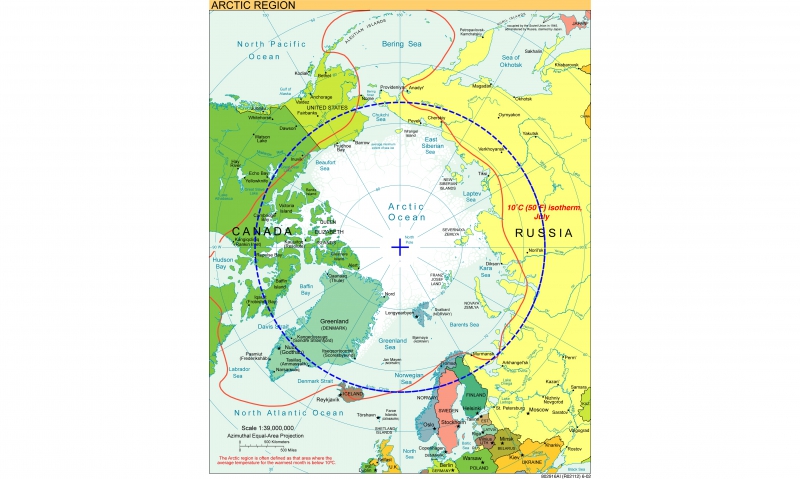 Vladimir Putin is at it again, this time in the Arctic. The Russian leader has announced plans to visit Franz Josef Land in 2017. A collection of islands north of the Barents Sea that lies within the Arctic Circle, Franz Josef Land is home to Russia’s newest and northernmost military base. New construction includes an airstrip capable of deploying fighter-bombers and refueling aircraft. It’s only the latest indication of Moscow’s determination to stake – and defend – its claim on vast swaths of Arctic territory.

• Moscow recently announced plans to have nine airfields up and running in the Arctic by 2018.

• In early 2015, Russia conducted a huge military exercise in the Arctic involving 80,000 troops, 220 aircraft, 41 ships and 15 submarines. In mid-2015, Russia’s top general announced, “The Defense Ministry will focus its efforts on increasing the combat capabilities of its units and increasing combat strength ... in Crimea, the Kaliningrad region and the Arctic.” By the end of 2015, Russia had stood up six new bases north of the Arctic Circle, opened/reopened 16 ports and 13 airfields in the region, and deployed sophisticated S-400 surface-to-air missile batteries in the Arctic.

• In 2014, Russian Deputy Prime Minister Dmitry Rogozin wrote the foreword to a book advocating “the historical and judicial right of Russia for the return of the lost colonies, Alaska and the Aleutian Islands.”

• In 2008, a Russian general revealed plans to train “troops that could be engaged in Arctic combat missions,” ominously adding, “Wars these days are won and lost well before they are launched.”

• In 2002, Russia claimed almost half the Arctic Circle and the entire North Pole.

The defense-intelligence consultancy firm Stratfor calls “militarization of the Arctic” one of the Russian military’s “top priorities.”

Why is that? Oil and gas account for more than 40 percent of Russia’s federal budget revenue. The U.S. Geological Survey estimates the Arctic holds 1,670 trillion cubic feet of natural gas and 90 billion barrels of oil. So, to extend its petro-boom, as an AEI study explains, “Russia must make huge investments in exploring and recovering oil from ... the east Siberian region and the Arctic shelf.” A report by the Wilson Center adds that Russia needs new Arctic oilfields “to offset declines in production at its conventional, legacy fields and to maintain production at a level of at least 10 million bpd beyond 2020.”

At first glance, it doesn’t appear the Arctic is on Washington’s radar screen. In a campaign focused on job creation, the economy and more than a few personal issues, neither President-elect Donald Trump nor former Secretary of State Hillary Clinton said much, if anything, about the Arctic.

However, many in Congress are aware of what Russia is doing – and what the United States is not capable of doing – in the Arctic.

A quick search of bills pending or passed in the outgoing 114th Congress returns legislation condemning Russia’s “military build-up” and “expanded operations in the Arctic”; requiring the Pentagon to identify and protect U.S. national security interests in the Arctic; authorizing energy exploration and development in U.S. Arctic territories; and earmarking resources to recapitalize the Coast Guard’s icebreaker fleet.

That last item is critically important. The United States has only two operational polar icebreakers – one of which is a medium-duty vessel tasked largely to scientific missions and the other of which has exceeded its 30-year lifespan. Russia has 41 icebreakers, with another 11 in production. The disparity prompted Coast Guard Commandant Adm. Paul Zukunft to conclude recently, “We’re not even in the same league as Russia right now.”

The United States deployed eight heavy icebreakers at the height of the Cold War. Adm. Robert Papp, former chief of the U.S. Coast Guard and current U.S. ambassador-at-large for Arctic issues, warns this icebreaker gap could haunt the United States. “While our Navy can go under the ice with submarines ... our nation has very limited Arctic surface capabilities. But surface capabilities are what we need to conduct missions like search and rescue, environmental response, and to provide a consistent and visible sovereign presence,” he explains.

Too many Americans forget that the United States is “an Arctic nation with broad and fundamental interests in the Arctic,” as President Barack Obama’s Arctic policy states: A large swath of our 49th state lies inside the Arctic Circle; some 27,000 troops are based in Alaska; U.S. troops man a key military base above the Arctic Circle (Thule Air Base in Greenland); and close allies Canada, Denmark, Iceland and Norway are Arctic nations.

Former NATO Commander Adm. James Stavridis has warned that the Arctic could become a “zone of competition, or worse, a zone of conflict.”

By acting in a concerted and transparent manner, the United States and its NATO allies can prevent the Arctic from becoming a zone of conflict. In response to Moscow, these allies are already acting – in most cases on their own – to defend their Arctic interests.

Norway has moved its military headquarters above the Arctic Circle, transferred “a substantial part of its operational forces to the north” and based its largest active army unit above the Arctic Circle, according to the Stockholm International Peace Research Institute. Norway routinely hosts multinational Arctic maneuvers, including a 15-nation exercise on the edge of the Arctic Circle in February-March 2016 enfolding 16,000 troops (1,900 of them U.S. Marines). Norway wants NATO to be more engaged in defending allied interests and territories in the Arctic.

Denmark is standing up an Arctic military command, beefing up its military presence in Greenland and deploying a joint-branch Arctic Response Force.

Canada’s new government has shown a renewed interest in the Arctic. Canada is building an Arctic Training Center halfway between the Arctic Circle and the North Pole and procuring a squadron of drones to monitor its Arctic possessions. However, Canada is investing precious little on defense (less than 1 percent).

Another Arctic nation, Sweden, is a de facto member of the alliance, collaborating extensively with NATO in the Balkans, Afghanistan, Libya and air-defense operations in Eastern Europe. Sweden has held large-scale Arctic war games featuring as many as 12,000 troops.

The United States is awakening to the Arctic security challenge as well. Marines are training this year alongside Norwegian troops and British commandos inside the Arctic Circle. Also this year, two Los Angeles-class submarines spearheaded U.S. Arctic military exercises designed to “evaluate operational capabilities in the region.”

F-22s have been deployed to Alaska, and some of the first operational F-35s will be based in Alaska. There are reports that U.S. anti-submarine planes may deploy to Iceland.

The U.S. Navy and Coast Guard have joined Norway, Denmark and Canada for Arctic maneuvers. The Pentagon unveiled its first-ever Arctic strategy in 2013. In 2015, for only the second time 52 years, Marine units deployed to the Army’s Northern Warfare Training Center in Alaska to train alongside Army units in cold-weather mountain warfare. And it was announced in December 2015 that for the first time in 35 years, the United States is building a new polar icebreaker, with Obama pushing Congress earlier this year to fast-track the construction and acquisition process.

Despite all of the aforementioned concerns about – and security operations in – the Arctic, there is not a critical mass of support within NATO for a higher profile in the Arctic. That could change with more leadership from Washington.

Combined With or without NATO, the United States and its allies should develop a collaborative security component for the Arctic.

As he has shown in Georgia and Ukraine, Putin has no problem using force to defend his claims and expand Russia’s borders. Russia’s claims are different than that of other Arctic nations both in the way the claims are being made and in the nature of the claims: Other nations are not laying claim to half of the region or the entire North Pole. And other nations are not making territorial claims in a brazen military context. If Russia continues down this path – using bluster and military deployments to justify its claims – it will achieve a fait accompli in the Arctic.

To prevent that outcome, the United States, Canada, Denmark, Iceland, Norway and Sweden need to take prudent steps to defend their Arctic interests and promote a rules-based order in the Arctic. This makes sense for at least three reasons.

First, it would prevent duplication of procurement, enable the pooling of assets, allow for a rational division of labor, and free each ally to play to its territorial and military strengths.

Second, it would underscore the allies’ seriousness about development and allocation of Arctic resources, thus preventing the sort of miscalculation that could lead to conflict. What Churchill said of his Russian counterparts is true of Putin and his generals: “There is nothing they admire so much as strength, and there is nothing for which they have less respect than for weakness.”

Russia should be given an opportunity to participate as a responsible partner in Arctic development. The challenge is to remain open to cooperation while bracing for worst-case scenarios. After all, even as Putin makes mischief, he is open to making deals. Russia and Norway, for instance, have resolved a long-running boundary dispute, paving the way for development in 67,000 square-miles of the Arctic. The United States, Russia, Canada, Denmark and Norway have agreed on Arctic search-and-rescue responsibilities. Canada and Russia held a joint conference on Arctic cooperation in November.

In a world of integrated markets, we know there’s much to gain from Arctic cooperation and much to lose from military conflict. But given what Russia has done in Ukraine and Syria, we also know that dealing naively with Moscow carries a heavy cost – and that cooperation is a two-way street.

If Putin continues to rattle sabers in the Arctic, the United States and its allies are left with few other options than standing together or allowing Russia to literally divide and conquer.