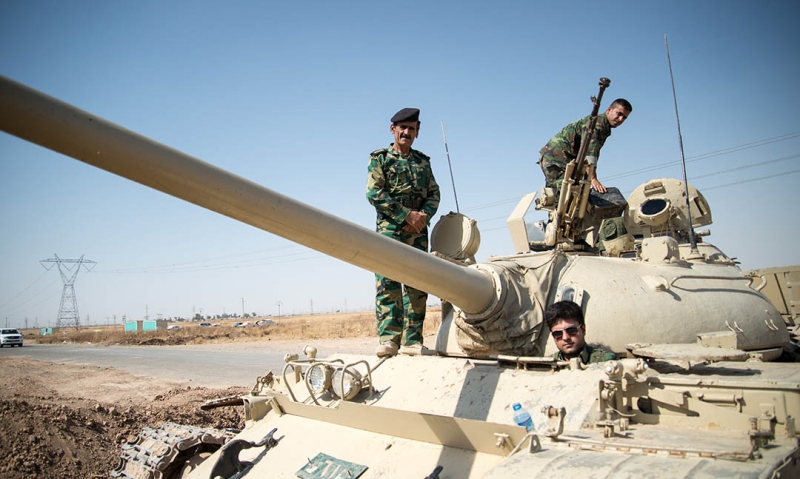 Peshmerga on a T-55 tank outside Kirkuk. Wikimedia Commons photo

As the U.S.-led campaign against the Islamic State (variously known as ISIS, ISIL and Daesh) slogs into another year, it may surprise some Americans to learn that perhaps our closest, most reliable ally on the ground is not the Iraqi army or some pan-Arab force that was long-promised but never materialized, but rather the army of a country that technically doesn’t even exist. That army is known as the peshmerga – the fighting force of the Kurdish Regional Government (KRG) in northern Iraq.

In 2014, some 7,500 peshmerga fighters fought their way to Mount Sinjar and rescued hundreds of trapped Yazidis. (Yazidis blend aspects of Zoroastrianism, Christianity and Islam; they were targeted for extermination by ISIS solely because of their beliefs.) With the help of U.S. airpower, peshmerga troops then recaptured Sinjar from ISIS in 2015, liberating thousands more Yazidis.

According to the State Department and DoD, peshmerga troops are holding a forward line extending hundreds of miles along the eastern boundary of ISIS control in northern Iraq.

The peshmerga’s importance has been perhaps most evident in the 2016-2017 operation aimed at dislodging ISIS from Mosul, the largest city occupied by ISIS.

The operation comprises an estimated 100,000 personnel drawn from a diverse array of sources: the KRG’s peshmerga, Iraqi military, Shiite militias, and Western conventional forces and special operations units. (U.S. commandos are reportedly engaged, though the Pentagon is cagey about that.)

The Pentagon says there are 15,000 peshmerga fighters engaged in the operation to retake Mosul and its surrounding towns. Indeed, the Kurds have led the way. For instance, according to Reuters, a 2,000-man peshmerga force plunged into Bashiqa, 10 miles outside of Mosul. Likewise, after traveling to northern Iraq, French journalist Bernard-Henri Levi detailed in The Wall Street Journal how the Kurds were “responsible for breaking through ISIS’s forward lines and opening the gates to the city,” while Iraqi military units were “responsible for taking the eastern – and later the western – sectors.”

Brett McGurk, presidential envoy to the international coalition fighting ISIS, told peshmerga soldiers that the coalition “could never have begun the assault into the city without all of you.”

Those liberated from the Islamic State’s monstrous occupation would agree: Levi notes that as the Peshmerga moved through Fazliya, a town northeast of Mosul, “The instant the town was liberated, every child poured into the main street chanting ‘long live the peshmerga!’”

Peshmerga means “one who faces death,” and the Kurds are certainly living up to that title in the Battle for Mosul. The Kurds and Iraqis are liberating a city webbed by booby-traps, car bombs, snipers, “crashing waves” of suicide bombers, off-the-shelf drones strapped with explosives, and chlorine and mustard gas. (The coalition has provided 24,000 protective chemical masks to peshmerga and Iraqi troops.)

But with some 14 brigades, an all-volunteer force numbering upward of 100,000, and training support courtesy of the U.S. Army’s Task Force Talon and other allied units, the KRG’s peshmerga is equal to the challenge.

Some 1,500 peshmerga have been killed in the war. Another 8,600 have been wounded, and the KRG has taken in 1.8 million refugees. With a total population of just 8.35 million, these are enormous sacrifices for the KRG. To get a sense of just how enormous, consider this: 1,500 peshmerga troops killed in action would be the rough equivalent of 57,485 U.S. troops.

In all but name

Juxtapose the KRG peshmerga’s record with that of the Iraqi military, which virtually disintegrated at first contact with ISIS in 2014. Only with lots of hand-holding from Western troops – and lots of help from peshmerga fighters and Iranian militia – has the re-rebuilt Iraqi military been able to engage ISIS and rise above its catastrophic collapse in 2014, when ISIS overran Mosul, Fallujah, Tikrit, Ramadi and nearly reached Baghdad.

What explains the vast difference between Iraq’s well-equipped but largely ineffective army and the KRG’s poorly-equipped but highly effective peshmerga?

Iraq is a nation-state only in name. In fact, it is arguably a failed state – and was long before the U.S. invasion of 2003. A 2000 report by the Center for International Development and Conflict Management concluded that Saddam Hussein’s Iraq had experienced several “state-failure events” in the 1990s and rated miserably on measures of state effectiveness and state legitimacy. In other words, U.S. intervention in 2003 didn’t cause the collapse of the Iraqi state. Instead, it could be said that the collapse of the Iraqi state caused U.S. intervention in 2003.

The Baghdad government still lacks legitimacy in the eyes of many of those who live inside Iraq’s tenuous borders. Indeed, Iraq is anything but a cohesive, unified state. “People say ‘united Iraq,’ whereas Iraq doesn’t control its own skies or all its own land territory or all its population, economy or diplomacy,” sighs Kemal Kirkuki, a peshmerga commander. “What is united? The country has no sovereignty?”

The KRG, on the other hand, is a nation-state in all but name: it is cohesive, unified, functioning and sovereign, and it has legitimacy in the eyes of its citizens. Iraq’s Kurdish region represents the only stable part of Iraq or Syria – and the only thing close to a viable nation-state inside the borders of Iraq and Syria. The poignant irony in the Kurds’ commitment to the counter-ISIS campaign is that they remain the largest ethnic group on earth without a state.

Full independence for Iraq’s Kurds is a matter of when, not if. “Independent Kurdistan is coming,” says KRG President Masoud Barzani. “It will take place when the security situation is resolved.”

Until then, the Kurds of what is currently known as Iraq are openly thankful for America’s friendship and support.

“Our only friends used to be the mountains,” a peshmerga soldier told Nolan Peterson, a former special operations pilot and combat veteran of Iraq now serving as a foreign correspondent. “Now we have America.”

In light of the deepening problems in Turkey – a longtime NATO ally that is proving increasingly undependable and undemocratic – Washington may soon ask more of our friends in the KRG. Some military strategists propose a shift of U.S. air operations from the familiar but unfriendly confines of Incirlik, Turkey, to the welcoming territory of the KRG. It’s not hard to imagine such a shift occurring, to quote Barzani, “when the security situation is resolved.”