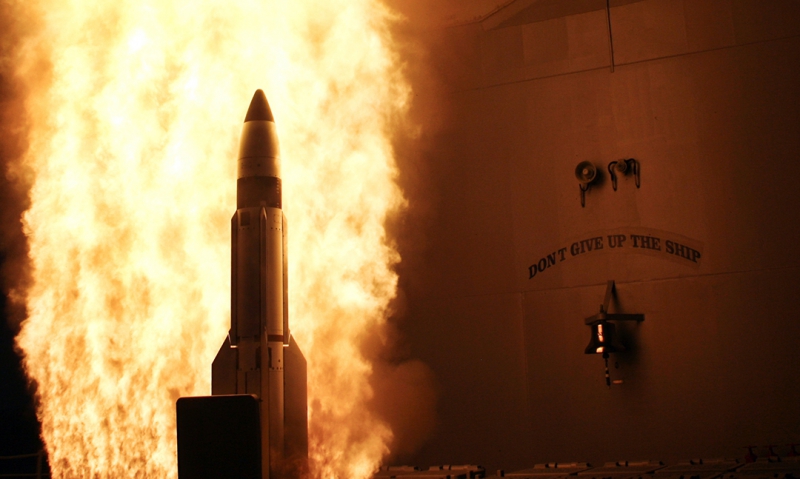 A new Gallup poll reveals that a plurality of Americans (27 percent) say “the Air Force is the most important branch.” Setting aside the obvious – that no branch is more important than another since, like cylinders in an engine, each branch is essential to protecting and promoting U.S. interests – something on the near horizon may force Gallup to conduct a new poll about America’s “most important military branch.” It seems there’s growing support for standing up a brand-new branch of the U.S. armed forces.

“My vision for the future is a separate Space Force within the Department of Defense, just like the Air Force, which had to be separated from the Army in order to be prioritized and become a world-class military service,” Rogers explains.

Arguing that “now is the time for reform even if it is disruptive today,” he says, the move toward a Space Corps or a fully independent Space Force will begin “in my subcommittee’s mark this year and next.” Indeed, Rogers and Congressman Jim Cooper, D-Tenn., the subcommittee’s ranking member, announced in late June that their portion of the National Defense Authorization Act would “require the creation, under the secretary of the Air Force, of a new Space Corps, as a separate military service responsible for national security space programs” by Jan. 1, 2019.

Rogers and Cooper are not alone, and their idea is not new.

In 2000, a congressionally-appointed commission openly contemplated the establishment of “a Space Corps within the Air Force” to conduct “independent operations” in space and “to deter and defend against hostile actions directed at the interests of the United States.” The commission added that “in the longer term” it may necessary to create “a military department for space.”

More recently, John Hamre, deputy secretary of defense under President Clinton, concluded last year, “We are not well organized to deal with the new challenges we face in space. The old structure may have been sufficient when space was an uncontested area of operations. That time has passed.” He mentioned as possibilities creating a full-fledged U.S. Space Force, carving out “a Space Service ... within the Department of the Air Force” like the Navy-Marine Corps model or “elevating the Space Command to become equal in stature to the Strategic Command.”

Gen. James Cartwright, who commanded Strategic Command, also has pointed toward the need for new tools in defending U.S. interests in space: “Without adjustments to our strategy, we may not be able to count on unfettered access to space-based systems should others persist in their course of developing counter-space weapons.”

Understandably, the Air Force has a strong preference to remain the lead branch in space operations.

Air Force Secretary Heather Wilson and other USAF leaders argue that “space warfighting is consistent with operations in the air – for which the Air Force has well-developed command-and-control and operational doctrine ... USAF best practices learned from operating in the air domain can serve as a basis for developing corresponding mechanisms for addressing threats in space.”

However, Rogers has a compelling counterpoint: “Space must be a priority, and it can't be one if you jump out of bed in the morning thinking about fighters and bombers first.” He believes that “space needs to be put on par with the other domains of conflict – land, air, sea and cyber ... It cannot remain a subservient mission.” He estimates “getting from where we are now to a Space Force” could take “10 or 12 years.” He points to the post-World War II evolution of the Air Force as a model for today.

Even if they are less than eager to give up the space enterprise, Air Force leaders share Rogers’ view about the critical importance of space not just as a means to enable land, sea and air operations, but as a theater for operations.

“Space is now a warfighting domain,” USAF leadership recently explained in a report to Congress. “The space enterprise is no longer simply an enabler and force enhancer; it is an essential military capability and a key component of joint warfare.”

According to Raymond, “It is a national imperative that we posture ourselves to deter any conflict that would extend to space, and if deterrence were to fail that we fight and win. Our national security – and the security of our allies –depends on it.”

Indeed, it would be wrong to conclude that congressmen and strategists are steering America toward a military branch dedicated to space. To the contrary, they are merely following U.S. interests into space.

Consider the most recent Space Foundation report, which reveals a global space economy of more than $323 billion – up from $261.6 billion in 2009. More than 221,500 Americans work in the space sector. U.S. government space spending was $44.6 billion in 2015 (the most recent year with available data), and non-government space spending by U.S. firms was $32 billion that year. Of the 1,300 functioning satellites currently orbiting earth, 568 are American.

As Buck puts it, “Space is critical to the American way of life.” Yet most Americans are oblivious to how much we depend on space for communications, commerce, air travel and ground transport, emergency services and most notably, for national security.

Missile-defense ships prowling the Pacific, ground troops patrolling Afghanistan, UCAVs circling over Iraq and Libya, JDAMs strapped to fighter-bombers loitering over Syria, sensors monitoring Russian, Chinese and North Korean nukes, the communications systems that connect troops, weapons, bases, allies and the National Command Authority, the infrastructure and superstructure of the entire military – all of this depends on space assets.

That helps explain why the Air Force space-related budget will increase by $1.5 billion in 2018, why the Pentagon’s entire space budget for 2017 is $22 billion, why the Pentagon recently christened a National Space Defense Center, why the Air Force created a Space Mission Force last year and stood up a new office headed by a three-star general this year to advise Air Force brass on matters related to space, and why Air Force Space Command now numbers some 36,000 uniformed and civilian personnel.

The Pentagon and its industry partners are using these organizations and resources to reorient America’s military, keep pace with America’s adversaries, and conceive, test and deploy new assets for a new domain.

DARPA, for instance, has chosen Boeing to build a new experimental spaceplane, dubbed the XS-1, which will be capable of flying Mach 10 and delivering payloads of 3,000 pounds into low-earth orbit. “Ultimately, DARPA envisions from the XS-1 a fully reusable unmanned vehicle, the size of a business jet, which would take off vertically like a rocket and fly to hypersonic speeds,” Defense News reports. Scheduled to fly by 2020, the XS-1 will be able to deploy 10 times in a 10-day period.

Meanwhile, the Air Force X-37B spaceplane recently completed a record-setting 718-day orbit. As always, the mission was shrouded in secrecy. The Air Force is known to have two X-37Bs and has deployed them into space since 2010 – each mission longer than the previous. The X-37Bs are probably used to deploy and test new satellite systems but may also be used to monitor, shadow and even disable enemy satellites.

Why the urgency and activity? Two words: China and Russia.

A 2015 Pentagon report describes China’s space program as “the most rapidly maturing space program in the world.” A 2016 report adds, “PLA writings emphasize the necessity of ‘destroying, damaging and interfering with the enemy’s reconnaissance ... and communications satellites,’ suggesting that such systems, as well as navigation and early warning satellites, could be among the targets of attacks designed to ‘blind and deafen the enemy.’” Toward that end, “The PLA is acquiring a range of technologies to improve China’s counter-space capabilities.” These include “directed-energy weapons ... satellite jammers ... anti-satellite capabilities.”

China has conducted at least three tests of anti-satellite weapons (ASATs): a 2007 test that rammed a kill vehicle into an aging Chinese satellite; a 2014 test that demonstrated the same capability without creating a permanent minefield of space debris; and a 2013 test that sent an ASAT into what published reports describe as “ultra-high altitude ... three-times higher than the weapon tested in 2007 and 2014.”

China’s military is heeding the words of Gen. Xu Qiliang, vice-commander of China’s Central Military Commission, who observes, “If you control space, you can also control the land and the sea.”

Russia tested a new ASAT in 2015. In 2013 and 2014, the Russian military deployed a number of satellites capable of “rendezvous and proximity operations” – military parlance for maneuvering around other satellites in order to disrupt or disable them. Russia recently deployed 37 satellites in a single rocket launch. And to remove any doubt about how Russia intends to use its space assets, Moscow announced in 2015 that Russia’s “air forces, anti-air and anti-missile defenses, and space forces will now be under a unified command structure” known as the Aerospace Forces.

In short, Russia and China are posturing their militaries to defend their interests – and leverage their capabilities – in space.

When an earlier generation of Americans recognized the importance of the skies to U.S. interests – and recognized that airspace had become an avenue for hostile action and a theater of war – they created a stand-alone branch dedicated to air operations. It seems prudent to do the same today for space operations.

As George Washington counseled, “There is nothing so likely to produce peace as to be well prepared to meet an enemy.” That time-tested truth applies whether the enemy lurks on land, at sea, in the sky or in space.