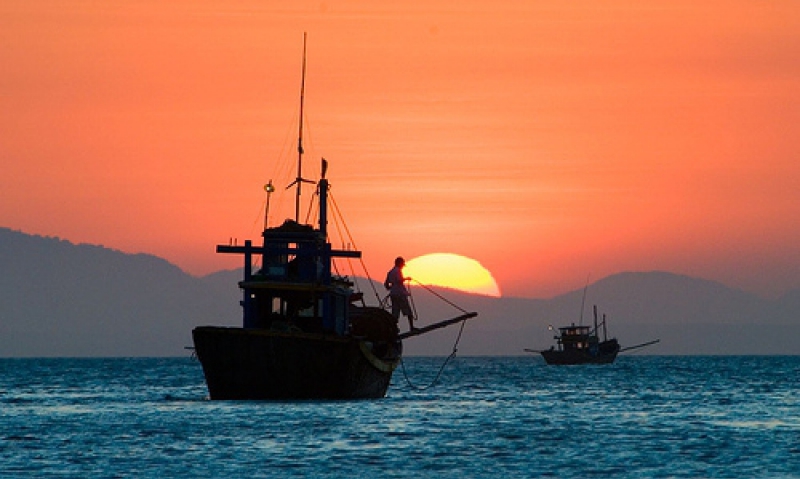 Heads of state, military leaders and foreign-policy thinkers are increasingly turning to geometry to make sense of what’s happening in the Indo-Pacific region. U.S. Pacific Command (PACOM) Commander Adm. Harry B. Harris talks about a security “quadrilateral” enfolding India, Japan, Australia and the United States. Prime Minister Shinzo Abe of Japan, who helped promote the quadrilateral concept a decade ago, has proposed “a strategy whereby Australia, India, Japan and the U.S. state of Hawaii form a diamond to safeguard the maritime commons stretching from the Indian Ocean region to the Western Pacific.” And former PACOM Commander Adm. Robert Willard has pointed to a trio of “trilateral relationships” – three triangles – as essential to keeping the Pacific peaceful: the U.S.-South Korea-Japan partnership, U.S.-Japan-Australia partnership and U.S.-Japan-India partnership.

Call it the geometry of geopolitics.

Asian Alliance? What’s known as the “Quad” – a security dialogue linking the United States, India, Japan and Australia – actually has been around since 2007, though, as CNBC reports, it cooled for a while. However, the Quad gained new momentum during the recent ASEAN Summit in Manila. At Japan’s urging, senior officials from the four democratic powers met on the sidelines of the ASEAN gathering and endorsed a number of shared principles and shared goals, including: a “free and open” Indo-Pacific, “respect for international law” and commitment to “the rules-based order in the Indo-Pacific.”

The common ground among the four is striking, especially when their post-ASEAN statements are set side by side, as The Diplomat did here. All four used language supporting free and open Pacific waterways, committing to the rules-based international order, opposing nuclear proliferation, and pledging to continue and deepen their partnership.

“The general intent seems clear,” Alyssa Ayres of the Council on Foreign Relations concludes. “Greater coordination among all four countries ... has the potential to be the most significant strategic response to China’s challenge of the rules-based international order.”

While it seems unlikely these four powers will form an Asian equivalent to NATO, Ayres points out that Japan and Australia are longtime U.S. treaty allies, and India is considered a “strategic partner” by each of the other three. Moreover, all four are strong democratic states, and all four are concerned about China’s increasingly threatening behavior.

Action Indeed, China’s actions are key to the geometric geopolitics of Asia and the Pacific – the Quad, the Diamond, the Trio of Triangles.

Claiming some 90 percent of the South China Sea based on a map drawn by Chinese cartographers in 1947, China is flouting international norms and turning reefs hundreds of miles from its territorial waters into military outposts. Beijing’s goal: to control the resource-rich South China Sea and muscle the United States out of the Western Pacific.

China’s 2015 military strategy offers some of the details of how it will achieve this goal. The document vows to “accelerate the modernization of national defense and armed forces” and “resolutely safeguard China’s sovereignty, security and development interests.”

China is certainly succeeding at the former: China’s military spending has mushroomed 150.9 percent since 2008. On the strength of this spending binge, China will deploy 73 attack submarines, 58 frigates, 34 destroyers, five ballistic-missile submarines and two aircraft carriers by 2020. The Pentagon reports China deploys more than 2,800 warplanes and has a bristling missile arsenal with “the capability to attack large ships, including aircraft carriers, in the Western Pacific.” Chinese leader Xi Jinping offers an ominous exclamation point to these statistics: “We must insist on using battle-ready standards in undertaking combat preparations, constantly enhancing officers’ and troops’ thinking about serving in battle, and leading troops into battle and training troops for battle.”

As to the latter, Beijing’s notion of sovereignty differs radically from that of its neighbors. By international convention, a country’s territorial waters extend 12 miles from its coastline. Beyond that, nations observe an exclusive economic zone (EEZ), which extends 200 miles off a country’s coastline and allows for privileged exploration rights. Not only does Beijing expect others to observe its EEZ and the airspace above as sovereign Chinese territory, and not only does Beijing refuse to respect the EEZs of its neighbors, but Beijing claims territories 500 miles from the Chinese mainland – and is building an archipelago of artificial islands to bolster these claims.

Satellite images detail Beijing’s brazen island-construction operations. These instant islands have obvious military applications. According to the U.S.-China Economic and Security Review Commission, “China appears to be expanding and upgrading military and civilian infrastructure – including radars, satellite communication equipment, antiaircraft and naval guns, helipads and docks – on some of the man-made islands.” One of the islands has a 10,000-foot airstrip – big enough for long-range bombers and fighter-interceptors.

True, Beijing is not trying to lop off part of Venezuela (like Kaiser Wilhelm II in 1902), or annexing the Sudeten in the heart of Europe (like Adolf Hitler in 1938), or declaring Kuwait “Province 19” (like Saddam Hussein in 1990). But the principle is the same. As they bully weaker neighbors and dot international sea-space with man-made islands, China’s leaders are taking what’s not theirs. The lesson of Munich teaches that it’s better to confront such aggression than to appease it.

These are not the actions or words of a benign power, which explains why the United States, Japan, India and Australia are increasingly cooperating on security matters -- and increasing their investments in the tools of security.

In 2016, the Japanese air force had to respond to 851 Chinese incursions into, or encroachments on, Japanese airspace. Similar incursions are happening around Japanese islands and waters. In light of this, it’s no surprise Abe has warned that China wants to turn the South China Sea into “Lake Beijing.” To prevent that unhappy outcome, Abe has vowed “to invest, to the greatest possible extent, Japan’s capabilities in this security diamond,” and he is backing up his words with actions. He persuaded parliament to approve a reinterpretation of the postwar constitution to allow Japan’s military to come to the defense of its allies. He is increasing East China Sea troop strength by 20 percent (to some 10,000 personnel); expanding Japan’s missile defenses; acquiring F-35 fighter-bombers; deploying massive “helicopter carriers” that can be up-converted to launch VTOL F-35Bs; and creating an amphibious unit modeled after the Marine Corps. In response to China, Japan has increased defense spending five consecutive years. The 2018 defense budget is 2.5-percent larger than 2017’s.

Likewise, Australia will increase defense spending 81 percent between 2016 and 2025. The Aussies are doubling their submarine fleet, procuring 72 F-35s, hosting thousands of U.S. Marines for rotational deployments, and considering a U.S. proposal to base B-1Bs and B-52s in Australia.

During the administration of President George W. Bush, India and the United States began to view one another as helpful counterweights to China, each providing strategic depth vis-à-vis China. Joint land-warfare maneuvers began in 2002; joint exercises grew “dramatically in size, scope and sophistication” in the first decade of the 2000s, according to a Pentagon report; and the two began partnering on aircraft-carrier development and arms sales. During the Obama administration, India and the United States signed important agreements on military logistics and defense technology; Indian warplanes participated in Red Flag; Indian warships participated in RIMPAC; and India became a “Major Defense Partner.”

“We are not just partners by chance,” Prime Minister Narendra Modi of India explained during his summit with President Donald Trump, pointing to “growing defense and security cooperation” and a “robust strategic partnership.” Echoing Modi, Trump added, “The security partnership between the United States and India is incredibly important.”

India is rapidly upgrading and upsizing its military. Recent and planned acquisitions include heavy-lift cargo planes, 126 fighter-bombers, new aircraft carriers and a U.S.-built amphibious docking ship. India has 75 new warships slated for christening by 2019. In addition, India recently added a new nuclear-powered submarine to its fleet and tested a new missile with a range of 3,100 miles.

As for the U.S. military, Trump has vowed to increase the active-duty Army to 540,000 soldiers, deploy a 350-ship Navy, field 36 Marine battalions and equip the Air Force with 1,200 fighter aircraft. Congress approved a $692 billion defense budget late last year (including baseline and war-operations funding) – a 13.7-percent increase over the previous year. However, one budget cycle is not enough to repair the self-inflicted wounds of sequestration. “It took us years to get into this situation,” Defense Secretary James Mattis explains. “It will require years of stable budgets and increased funding to get out of it.”

The numbers remind us that keeping the Pacific, well, pacific is about geometry as well as arithmetic: At the height of the Reagan buildup, the Navy boasted 594 ships. Today’s fleet numbers just 272 ships. While today’s Navy may be more ambidextrous than its forerunners, deterrence is about presence. And the sequestration-era Navy lacks the assets to be present in all the places it’s needed. “For us to meet what combatant commanders request,” according to former CNO Adm. Jonathan Greenert, “we need a Navy of 450 ships.” A government-funded study concludes the United States needs 14 aircraft carriers (the Navy has 10 operational), 160 cruisers and destroyers (the Navy has 84), and 72 attack submarines (the Navy has 52).

Given the sheer size of the defense budget, the balance of power would still seem to favor the United States – until one considers that America’s military assets and security commitments are spread around the globe, while China’s are concentrated in its neighborhood.

Together, these numbers further underscore the importance of the Quad. India, Japan and Australia serve as force multipliers for America’s overstretched military. These partners possess all the ingredients necessary to serve as a bulwark against China: they are democratic, strategically located, wealthy and adaptive. Most important, they are awake to the dangers posed by an unchecked China – and increasingly willing to work together.

For instance, warships from the United States, India and Japan recently converged on the Bay of Bengal for the largest naval exercise in the region in more than two decades. Dubbed “Malabar,” the exercise featured 17 warships – including the aircraft carrier USS Nimitz, India's INS Vikramanditya aircraft carrier, and Japan's JS Izumo (a helicopter carrier) – and more than 95 warplanes. It was the first time all three countries deployed aircraft carriers for Malabar.

Japan and India have agreed to joint naval exercises and resource-development projects. Japan and Australia signed a bilateral declaration on security cooperation in 2007 and a defense-acquisition agreement in 2010.

In 2015, Australia and India began holding bilateral military maneuvers. The first was held in the Bay of Bengal; the second, which took place last June, was held off Australia’s western coast. According to the Australian navy, the exercises “focus on ... interoperability.”

Not long ago, there was talk that China’s immense economic power would erode America’s role in the Pacific and nudge America out of China’s neighborhood. But something interesting has happened – something the “trade über alles” caucus never foresaw. China’s behavior awakened Australia, Japan and India to a new threat. The result is the emergence of a region-wide hedge against Beijing -- and a new era of geometric geopolitics.