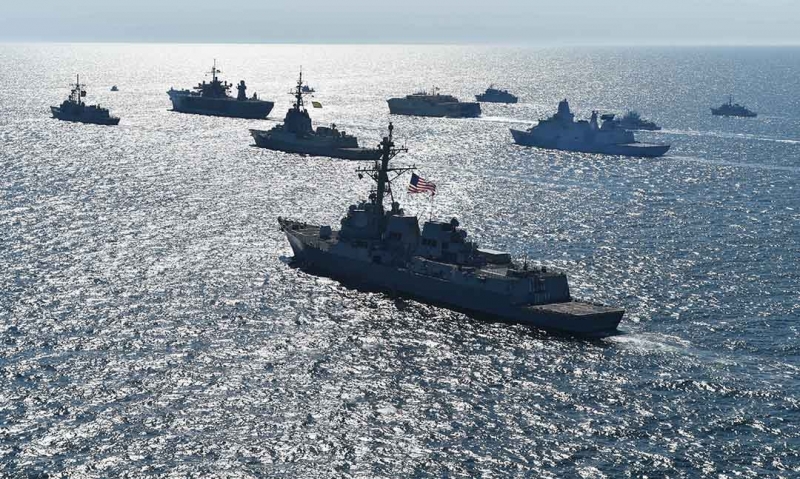 Gen. Robert Brown, commander of U.S. Army-Pacific, reported last month that he has noticed something different during recent visits with senior Chinese military officials. “It took me a while to figure out what exactly was different,” he began. Then it dawned on him. “I realized that China used to fear us,” he explained. “They don’t fear us anymore.” This is an ominous turn of events.

It’s ominous because for much of its history – especially since the end of World War II – the United States has premised its national security on deterrence.

“There is nothing so likely to produce peace as to be well prepared to meet an enemy,” President George Washington argued.

“We infinitely desire peace,” President Theodore Roosevelt declared. “And the surest way of obtaining it is to show that we are not afraid of war.”

“Our arms must be mighty, ready for instant action,” President Dwight Eisenhower explained, “so that no potential aggressor may be tempted to risk its own destruction.” President John Kennedy vowed to “strengthen our military power to the point where no aggressor will dare attack.” And President Ronald Reagan steered the Cold War to a peaceful end by promoting “peace through strength,” noting that “none of the four wars in my lifetime came about because we were too strong.”

However, as Brown understands, deterrence doesn’t work if America’s enemies don’t understand that the costs of aggression will be greater than any potential benefits – and don’t fear the consequences of aggression. Fear, in other words, is an essential ingredient of deterrence. It pays to recall that deterrence comes from the Latin dēterreō: “to frighten off.”

To restore America’s deterrent strength in the Indo-Pacific – and, yes, to restore a healthy fear of American might inside Beijing – Brown argues that Washington must become “less predictable” and “present multiple dilemmas” to the People’s Liberation Army (PLA).

Let’s first consider the second part of Brown’s formula. Presenting the PLA with “multiple dilemmas” presupposes having the resources to meet and blunt the China challenge in multiple domains. Regrettably, sequestration hacked away at those resources.

A Center for Strategic and Budgetary Assessments study notes that in constant dollars, defense spending fell by nearly one-fourth between 2010 and 2015.

As a result, the Army’s active-duty endstrength by 2016 was smaller than it was on the eve of 9/11. The Air Force is “the smallest and oldest it has ever been,” the Air Force reports. Defense News adds that “Air Force mishaps rose 16 percent between 2013 and 2017. Across the military, accidents involving all of the Defense Department’s warplanes – manned fighter, bomber, helicopter, tiltrotor and cargo aircraft – rose nearly 40 percent during that time.” In 2016, after years of sequestration, Marine aviation units were reduced to salvaging parts from museums. By the end of 2016, only 41 percent of Marine aircraft were able to fly.

By definition, naval power is a prerequisite for deterrence in a maritime domain such as the Indo-Pacific. But owing largely to sequestration, America’s Navy is not nearly large enough to deter China.

At the height of the Reagan rebuild, the Navy boasted 594 ships. Today’s Navy has only 277 active ships. These numbers aren’t even close to America’s maritime needs. “For us to meet what combatant commanders request,” according to former CNO Adm. Jonathan Greenert, “we need a Navy of 450 ships.” Congressional testimony reveals that in 2007 the Navy had the resources to meet 90 percent of combatant commanders’ requests. By 2014, that number had fallen to just 43 percent. A government-funded study concludes that the United States needs 14 aircraft carriers (the Navy has 10 active), 160 cruisers and destroyers (the Navy has 84), and 72 attack submarines (the Navy has 52).

Yes, recent defense budgets have ended sequestration’s maiming of the military. However, a couple budget cycles are not enough to repair the damage. “It took us years to get into this situation,” Defense Secretary James Mattis concludes. “It will require years of stable budgets and increased funding to get out of it.”

It pays to recall that Beijing is not beating its swords into plowshares. China’s military spending has mushroomed 150.9 percent since 2008. China will deploy 73 attack submarines, 58 frigates, 34 destroyers, five ballistic-missile submarines and two aircraft carriers by 2020. The Pentagon reports China deploys more than 2,800 warplanes and has a bristling missile arsenal with “the capability to attack large ships, including aircraft carriers, in the Western Pacific.”

Given the sheer size of America’s military, the balance of power would still seem to favor America – until we consider that America’s military assets and security commitments are spread around the globe, while China’s are concentrated in its neighborhood.

As for becoming less predictable, having fewer military assets limits the president’s options, which makes the U.S. military more predictable. So, a bipartisan commitment to steady and sustained investments in defense will be key to keeping the PLA guessing – and deterring the PLA.

President Donald Trump seems to relish being unpredictable. Before Trump became president, economist Tim Harford suggested in his book “Messy” that the future president not only thrives on chaos but tries to sow chaos. During the campaign, Harford points out, Trump “chose his battlefields,” deployed chaos as a weapon and left his opponents “always scrambling to figure out a response.” Harford is not alone in this assessment. A Washington Post analysis concludes Trump “revels in the chaos” and “believes the chaos produces just the sort of results he likes.”

Of course, chaos on the campaign trail is decidedly different than chaos on the global stage. Put another way, a little unpredictability goes a long way in great-power relations – something the White House must keep in mind in dealing with Beijing.

As the Pentagon’s new National Defense Strategy puts it, America’s military must “be strategically predictable, but operationally unpredictable.”

It’s a balancing act. Eisenhower, quoting Stonewall Jackson, advised, “Always surprise, mystify and mislead the enemy.” It was a clear signal that Eisenhower planned to keep Moscow and Beijing on their toes. But Eisenhower also knew there was a time to be very predictable to the enemy. Recall how he answered Soviet Premier Nikita Khrushchev’s boast about the Red Army’s overwhelming conventional advantage in Germany: “If you attack us in Germany,” the steely U.S. commander in chief fired back, “there will be nothing conventional about our response.”

President Richard Nixon and Henry Kissinger played up the notion that Nixon was so unpredictable that hostile governments like North Vietnam and the Soviet Union would be wiser and safer working with Kissinger than dealing with Nixon’s wrath. Decades later, it was revealed that Nixon advised Kissinger to describe the president in discussions with Soviet officials as “out of control” and to emphasize that “he has his hand on the nuclear button.” This came to be known as the “madman theory” of foreign policy, and it produced some successes as well as some terrifying moments (see here and here).

For Trump, as before for Nixon, this sort of unpredictability is a high-risk-high-reward proposition. But it pays to keep in mind that what might force a third-rate power like North Korea to change its behavior may not have the same effect on a near-peer competitor like China.

With the right mix and number of tools, there are other ways to keep Beijing on its heels. One of those – a rather easy and inexpensive course of action – is to use China’s asymmetric tactics against China.

Beijing continues its audacious effort to annex the South China Sea piecemeal by building artificial islands atop the reefs and shoals dotting this vital international waterway. Some of these islands now include surface-to-air missiles, anti-ship missile batteries and sophisticated radar systems. This is all part of China’s anti-access/area-denial strategy – “A2AD” in Pentagon parlance. With A2AD, China is erasing America’s maritime edge.

The good news is that asymmetric tactics can cut both ways, and U.S. military planners are exploring ways to make A2AD work against Beijing.

Researchers at RAND propose “using ground-based anti-ship missiles (ASM) as part of a U.S. A2AD strategy” to “challenge Chinese maritime freedom of action should China choose to use force against its island neighbors.”

Importantly, the RAND study points out that the U.S. military would not have to supply all the weapons systems or military units needed for such an effort. Instead, the United States could link several strategically located partner nations – Indonesia, Malaysia, Japan, South Korea, Taiwan, the Philippines – in a regional ASM coalition, with U.S. assets playing a direct role where needed.

“Indonesia and Malaysia have robust arsenals of medium-range ASMs,” according to RAND, and could put at risk Chinese warships transiting the Strait of Malacca. Related, Singapore and the United States have a deepening security partnership, and the city-state sits strategically at the entrance of the strait. ASMs deployed in Taiwan, the Philippines and Japan (Okinawa) “could effectively cover all naval traffic south of Okinawa” as well as the Luzon Strait. ASMs deployed on the southern tip of South Korea and on Japan’s Kyushu island could deny Chinese warships freedom of movement further north.

In those instances where U.S. assets are directly deployed, PACOM commander Adm. Harry Harris (former commander of Indo-Pacific Command and future ambassador to South Korea) wants Navy, Army, Marine and Air Force unit commanders to “be able to create effects from any single domain to targets in every other domain.” A mix of Army artillery, rocket systems, air-defense systems and THAAD batteries, Navy Aegis Ashore batteries, and surface-to-surface ASMs manned by rapid-deployment Marine units would remind Beijing that two can play the A2AD game.

Indeed, such a strategy would “vastly expand the set of military problems that the People’s Liberation Army would face should it consider initiating a conflict with its neighbors or U.S. partner nations,” RAND concludes.

Another option: Washington could increase the quantity and quality of arms shipments flowing to Japan and Taiwan.

Washington could send Taiwan upconverted F-16Vs and/or top-of-the-line F-35s, anti-aircraft and anti-missile assets, and anti-ship systems to underscore America’s commitment to the sovereignty of the island democracy. Likewise, Washington could move forward with plans to share an F-22 variant with Japan and encourage Tokyo to convert its “helicopter carriers” into full-fledged aircraft carriers simply by deploying vertical-takeoff F-35Bs on the massive ships.

Not only would these policy initiatives remind Beijing of the cards Washington holds; they could go a long way toward deterring Beijing from reincorporating Taiwan by force or seizing Japanese islands by stealth.

Finally, Washington could and should use the bully pulpit to keep Beijing off balance. As Reagan argued, “a little less détente ... and more encouragement to the dissenters might be worth a lot of armored divisions.”

Beijing is acutely sensitive to these issues and has no answer to them, except systemic political reform, which would be in America’s – and Asia’s – interest.