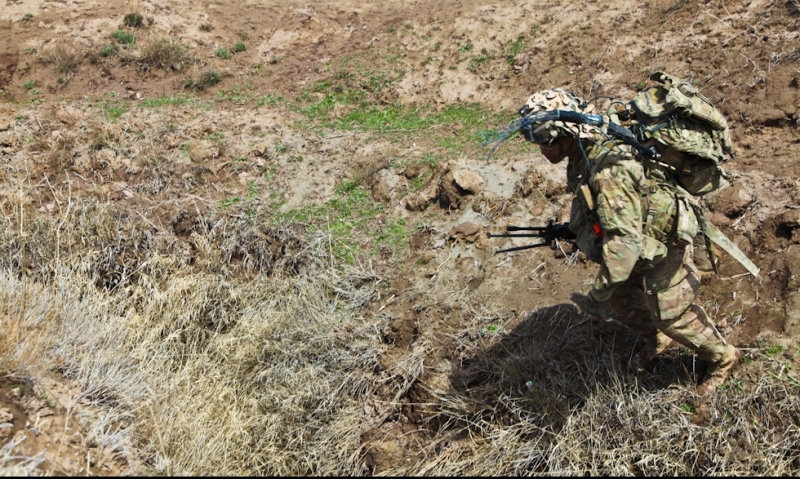 If there was any doubt about whether U.S. engagement in the world makes a difference – and whether aggressor nations capitalize on U.S. disengagement – recent developments in Europe, the Pacific and the Middle East should put it to rest.

Blissful, neutral, idyllic Sweden is for the first time since 1961 distributing pamphlets “to every household” informing citizens what to do in the event of a military attack. The pamphlet is ominously titled “If Crisis or War Comes.” As UPI reports, the document provides information on securing food and water and the location of bomb shelters. “The world around us has changed,” the document concludes, citing “threats to our security and independence.”

Given that the document mentions cyberattacks and the spread of false information via social media, there can be no doubt that the main threat motivating Sweden’s renewed focus on civil defense is Russia. “If Sweden is attacked by another country,” the document declares, in a signal to both the Swedish people and the Russian government, “we will never give up. All information to the effect that resistance is to cease is false.”

Related, the Swedish government has reintroduced military conscription and reopened a garrison on the island of Gotland, which sits between the Swedish mainland and the Baltic states. Asked why Sweden has made these moves, the Defense Ministry cited “the Russian illegal annexation of Crimea, the conflict in Ukraine and the increased military activity in our neighborhood.”

Likewise, Lithuania’s Defense Ministry has distributed a new emergency-response manual “to gird citizens for the possibility of invasion, occupation and armed conflict,” Radio Free Europe/Radio Liberty reports. Titled “How to Act in Extreme Situations or Instances of War,” the manual aims to help Lithuania’s 3 million citizens prepare for the worst, namely, a Georgia- or Ukraine-style invasion by Russia.

“When Russia started its aggression in Ukraine, our citizens here in Lithuania understood that our neighbor is not friendly,” said Lithuanian Defense Minister Juozas Olekas. “We cannot rule out a similar kind of situation here.”

In response to Putin’s use of military personnel scrubbed of insignia, the manual instructs Lithuanian citizens “who notice unknown and unidentified armed groups operating in their neighborhood” to “notify the authorities”; braces Lithuanians for the possibility of evacuation to Poland, Germany, Sweden or Finland; offers tips on how to tell the difference between Russian and Western tanks; and provides guidance for surviving in the wild, as the BBC reports. “It is most important that the civilians are aware and have a will to resist,” the document bluntly adds, again signaling both the people of Lithuania and the government in Moscow.

Estonia also is publishing a war-preparation brochure. And all three Baltic states – Estonia, Latvia and Lithuania – are arming and training civilian groups in insurgency tactics and irregular warfare. Estonia’s civilian paramilitary unit is known as the Estonian Defense League, Lithuania’s as the Riflemen’s Union, and Latvia’s as the National Guard.

While the Balts and Sweden brace for a Russian invasion, the Japanese government is preparing its people for a North Korean nuke. Japan’s government has revised its civil-defense guidelines to include “for the first time instructions on how to respond if a North Korean ballistic missile is heading toward Japan,” The Washington Post reports.

The updated document matter-of-factly notes that it is “difficult to be able to pinpoint missile landing areas before their launch” and “difficult to specify the kind of warheads (conventional warheads or nuclear, biological and chemical warheads) before they land.”

Notwithstanding Pyongyang’s recent willingness to talk, the Post notes that in 2017, North Korea fired three missiles into Japanese waters, that Pyongyang has tested and deployed medium-range missiles “easily putting all of Japan ... within reach,” and that North Korea has fired missiles over and through Japanese airspace (1998 and 2009).

In the South China Sea, Beijing has constructed some 3,200 acres of instant islands in international waters -- deploying SAM batteries, anti-ship missiles and radar systems on some of the man-made islands. One of the instant islands features a 10,000-foot airstrip – long enough for bombers and fighter-interceptors. These islands “are clearly military in nature,” according to Adm. Harry Harris, former commander of U.S. Indo-Pacific Command and future ambassador to South Korea. He adds that the Chinese “have seven new bases in the South China Sea.”

All told, Beijing now has 27 military outposts sprinkled across the tiny islands and atolls of the South China Sea, many of them on or encroaching upon waters and territories claimed by other nations. Some of these “Made in China” fortifications are flatly illegal. All of them are provocative.

In response to China’s increased military drills around Taiwan – there were 16 in 2017 – the island democracy held a nationwide exercise in June that enfolded coastal defense, anti-amphibious and anti-airborne operations, and the participation of key telecommunications firms. The South China Morning Post describes it as Taiwan’s largest military exercise “in recent history.”

Given China’s provocative actions, it’s no wonder why Taiwan’s government has unveiled plans to boost defense spending by 50 percent, with President Tsai Ing-wen vowing to increase the military budget every year of her administration. Japan has increased defense spending six years running, with the 2018 defense budget setting a new record.

Finally, we come to the Middle East. From its new bases in Syria, Iran has launched missiles and drones into Israel, while deploying thousands of personnel and proxy fighters near Israel’s border. “Iranian forces,” Defense Secretary James Mattis reports, “have tried to get down closer to the Israeli border … very close to it, and you've seen Israel take action over that.”

Indeed, the Israel Defense Forces (IDF) have struck Iranian command-and-control, personnel and arms depots in Syria, and Prime Minister Benjamin Netanyahu recently warned Syria’s Bashar Assad that “his regime is no longer immune … Israel will not tolerate the Iranian military entrenchment in Syria against Israel.”

But Iran is not Israel’s only concern. The IDF’s deputy chief of staff grimly warned in March that Israel is preparing for war on six fronts.

If nothing else, this litany is evidence of the need for the United States to remain an engaged, dependable ally in a dangerous world. Regrettably, America has sometimes fallen short in this regard in recent years.

For example, President Barack Obama pulled U.S. stabilization forces out of Iraq and scaled back the counterinsurgency-counterterror mission in Afghanistan in order to “focus on nation-building here at home”; reneged on U.S. defense commitments in Eastern Europe; put a time limit on U.S. participation in NATO’s Libya intervention; and allowed sequestration to limit the resources, reach and role of the U.S. military.

Although President Donald Trump has ended sequestration’s maiming of the military, he has in some ways continued his predecessor’s policy of disengagement. Consider his assessment that NATO is “obsolete”; his ambiguity about America’s commitment to Article V of the North Atlantic Treaty; his suggestion that allies in South Korea and Japan “don't pay their fair share for U.S. military bases” and declaration that “we have to build our own nation”; his threats to stop trading with close allies in Europe, North America and Japan.

Of course, this approach seems to be what the American people want. It pays to recall that the American people, fatigued by the burdens of post-9/11 campaigns against terrorist regimes and terrorist groups, elected presidents in 2008, 2012 and 2016 that promised to shrink America’s role in the world – and rejected candidates that advocated more robust overseas engagement.

Yet we hear little about the costs of disengagement: Pearl Harbor in 1941; Korea in 1950; post-Soviet Afghanistan, which spawned the Taliban, which provided safe haven to al-Qaida, which maimed Manhattan; Iraq and Syria today, which gave rise to ISIS and chemical warfare.

Let’s take a closer look at two of those instances of disengagement:

Or consider Iraq. By every metric, post-surge Iraq was on an upward trajectory. U.S. military commanders recommended that 20,000 U.S. troops remain in Iraq – as in Korea – to bolster a fragile government, sustain the country’s forward momentum and secure U.S. interests. Yet the disengagers saw U.S. involvement in Iraq as a problem to be corrected, rather than a commitment to be sustained. As former Defense Secretary Leon Panetta laments in his memoir, the Obama White House was “so eager to rid itself of Iraq that it was willing to withdraw rather than lock in arrangements that would preserve our influence and interests.” And so, the White House pulled all U.S. troops out of Iraq in 2011.

Predictably, without the steadying hand of the American military, the Maliki government abused its power; sectarian tensions exploded; the window of opportunity for Iranian mischief widened; al Qaeda in Iraq reconstituted and rebranded itself as ISIS; Baghdad was nearly overrun; Yazidis, Shiites and Christians were massacred; and ISIS declared a jihadist caliphate in the heart of the Middle East. Only Obama’s eleventh-hour decision to reverse course and redeploy U.S. forces into Iraq prevented the country from disintegrating.

That brings us to the often-overlooked benefits of engagement.

During World War II, U.S. engagement prevented a return to the Dark Ages. During the Cold War, U.S. engagement preserved free government, elevated human rights, rehabilitated Germany and Japan, and transformed Europe from an incubator of war into a partnership of prosperity. For 73 years, U.S. engagement has warded off great-power war, which was the norm between 1745 and 1945.

This isn’t charity work. An international order that tilts in favor of free governments and free markets, a peaceful Europe and stable Asia-Pacific, the free flow of oil through the Persian Gulf, an open trading system connected by open sea lanes – all of this is in the national interest. In fact, the United States benefits from the liberal international order the United States helped build more than any other nation. As Paul Miller of the National Defense University observes, “Liberal order is the outer perimeter of American security.”

However, the post-World War II order didn’t emerge by accident and doesn’t endure by magic. It presupposes U.S. engagement and “requires positive, active effort and sacrifice,” as Gen. George Marshall explained in 1945. “Above all it is a continuing process.”

Without that effort and sacrifice, the post-World War II order will erode.