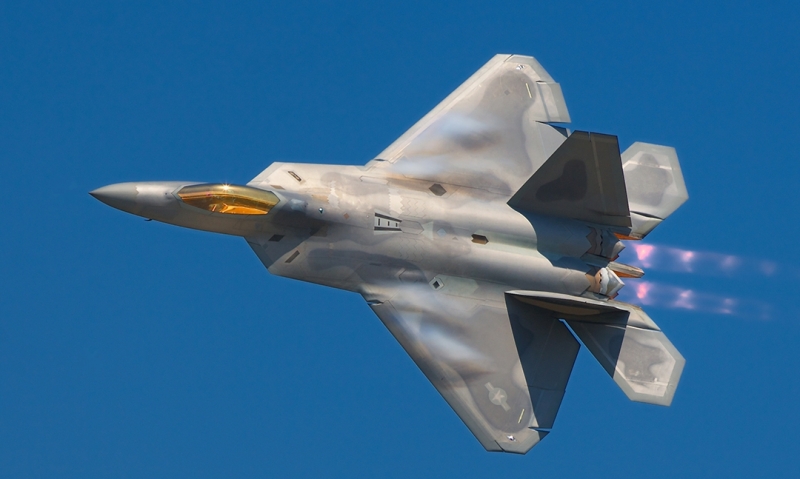 As China and Russia challenge the West with increasingly sophisticated warplanes and air-defense systems – and brazen acts of mischief and outright aggression in the South and East China Seas, North Atlantic, Eastern Europe, Western Pacific and Eastern Mediterranean – it would be helpful for U.S. commanders to have lots more F-22 Raptors at the ready. But don’t take my word for it. As Gen. Herbert “Hawk” Carlisle, former commander of Air Combat Command, has conceded, “I think in retrospect we stopped the buy too soon ... we could have used more F-22s certainly in the world we face today.” Instead of a quiver full of hundreds of the world’s very best fifth-generation, air-dominance warplane, the United States has fewer than 190 F-22s in service today.

The initial plan called for procurement of 749 F-22s. Air Combat Command said it needed no fewer than 381 F-22s to carry out its mission. But in 2009, the Obama administration killed the F-22 and shut down the F-22 production line at just 187 aircraft.

In fact, the Russians and Chinese are ahead of schedule, and the United States – owing largely to the devastating cuts triggered by sequestration – is way behind schedule.

China’s first fifth-gen warplane, the J-20A, became operational in 2017. And Russia has already deployed its fifth-gen fighter-bomber (the Su-57) into a war zone – in the crowded skies over Syria.

As for Gates’ prediction about having 1,000 American fifth-gen warplanes by the time Russia and China were ready to deploy their first, only about 305 F-35 variants have been delivered. Even with the existing fleet of 187 F-22s, we’re not close to deploying 1,000 of these high-tech, high-end air assets.

In 2016, Congress ordered a study to explore the feasibility of, and costs associated with, reopening the F-22 production line and building 194 new F-22s.

The Air Force, wary of restarting the F-22 Raptor assembly line for fear it would cannibalize existing resources earmarked for the F-35 program and B-21 program, has never been keen on reversing course vis-à-vis the Raptor – as underscored by the report and cost estimate the Air Force delivered. As a recap of the study (classified until May of this year) details, “The Air Force estimated that the initial unit cost for an order of 194 aircraft would be approximately $216 million.” The projected $50 billion total cost for 194 extra F-22s cooled congressional interest in the idea. (Recent legislation has allocated fresh resources for upgrading the existing F-22 fleet.)

The Air Force, for its part, announced that it has “no plans” to “restart the F-22 production line,” concluding it wouldn't make "economic or operational sense."

The Air Force’s concerns are understandable, especially given the fickleness of policymakers when it comes to defense spending in recent years. Congress and the White House were penny-wise and pound-foolish when they killed the F-22 – sacrificing the long-term military and security benefits (and per-unit cost savings) of a full production run of F-22s for short-term (and short-lived) gains.

Although the F-22 was panned by critics for a supposed $412 million per-unit cost, the actual per-unit cost of the F-22 was much lower. The last 60 F-22s produced cost $137 million per copy. And if the F-22 had been allowed another multi-year production run, the per-unit cost would have fallen even further, to just $85 million, according to former Air Force Chief of Staff Gen. Michael Moseley.

Whether we are talking about TVs, cars or warplanes, per-unit costs decrease as more units are built. Building and buying in bulk makes all the difference. That’s the magic of economies of scale.

“We are considering domestic development, joint development and the possibility of improving existing aircraft performance, but we have not yet come to any decision,” a Japanese Ministry of Defense spokesman recently said.

So, some observers are proposing leveraging Japan’s desire to acquire a fifth-generation fighter in order to help defray costs associated with restarting the F-22 production line.

The good news is that “95 percent of the F-22-related production tooling is still available,” according to the aforementioned recap of the congressionally-mandated study on restarting the F-22 program. A Congressional Research Service (CRS) report adds that Lockheed Martin stored tens of thousands of pieces of equipment and tooling used in building the Raptor. Lockheed Martin “also documented the assembly process, including videotaping each step of assembly, in order to more quickly train workers to assemble F-22s in the event of a production-line restart.”

Sharing the costs with Japan would allow the Air Force to get ahold of an updated version of the world’s very best fifth-generation fighter – without the sticker shock. Call it the “F-22B,” just as the B-1 bomber – cancelled in 1977 under the Carter administration – was resurrected and renamed the “B-1B” during the Reagan administration. The B-1B, by the way, is still in service today and keeping busy in deterring China, North Korea and Russia, while targeting terrorists in Syria and Afghanistan.

Another possibility, as CRS reports, is Lockheed Martin’s idea to build a beefed-up fighter-bomber version of the F-22 dubbed the “FB-22.” This hearkens back to the F-111/FB-111, variants of which were deployed by the United States and Australia from the late 1960s all the way until 2010 in multiple roles, including: laser-guided tactical strike, electronic warfare and nuclear bomber.

Yet another possibility is a hybrid incorporating the best of the F-22 and F-35. Indeed, Lockheed Martin has unveiled plans “to offer Japan a stealth-fighter design based on its export-banned F-22 Raptor and advanced F-35 Lightning II aircraft,” Reuters reports. Sources cited by Reuters say the hybrid design “could be superior to both” the F-22 and the F-35, and Lockheed officials suggest such a plan is necessary “to help Japan stay ahead of Chinese advances.” Again, a joint U.S.-Japan effort would defray production and development costs.

The F-22 saga is a cautionary tale, especially as America’s defense industrial base shrinks and, equally worrisome, grows reliant on global supply chains beyond our control. “If you make a decision which ends a certain part of our industrial base, it doesn’t come back,” as then-Joint Chiefs Chairman Adm. Mike Mullen warned in 2011. “People go away, skills go away” – and so do the assets needed to deter our enemies.