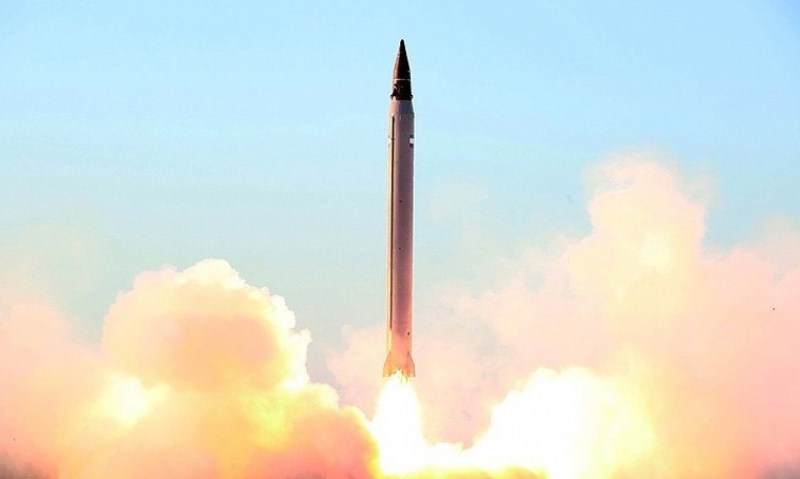 “Iran remains the world’s leading state sponsor of terrorism and is responsible for intensifying multiple conflicts and undermining U.S. interests in Syria, in Yemen, in Iraq, in Bahrain, in Afghanistan, and in Lebanon,” reports Ambassador Nathan Sales, the State Department’s coordinator for counterterrorism. “The threats posed by Iran’s support for terrorism are not confined to the Middle East; they are truly global.”

That’s not hyperbole. Iranian agents have been arrested for bomb plots in Washington, D.C, and Paris. According to the State Department, Iran’s terrorist fundraising networks stretch into Africa and South America. Iranian scientists have traveled to North Korea to glean information about building a nuclear weapon. And Iranian military personnel and/or proxies are deeply engaged in Iraq, Syria, Lebanon, Yemen and Bahrain.

All of this serves as a grim reminder that there’s nothing quite like Iran’s terrorist tyranny. Yes, other regimes challenge the global order; other regimes make common cause with terrorists. But the men who run Iran have normalized terrorism into a basic government function -- like building roads. Indeed, it could be argued that the Islamic Republic of Iran is not a regime that engages in terrorism, but rather a terrorist organization that runs a regime.

That’s why it was so difficult for so many Americans to get behind the Joint Comprehensive Plan of Action (JCPOA) in 2015. The premise underpinning the JCPOA – better known as the “Iran deal” – was that with enough inducements and incentives, Iran would choose the path of normalcy and respectability over its old ways of subterfuge and terror. So, the United States and its closest allies in Britain and Europe agreed to lift crippling sanctions that had forced Iran to the negotiating table; Washington released more than $100 billion in frozen assets to Tehran; and the Obama administration shipped Iran hundreds of millions of dollars in hard currency.

In exchange, Iran was required to limit – but not dismantle – the number of centrifuges it had in service; reduce – but not eliminate – its uranium stockpile; confine – but not end – its nuclear research and development to specific sites; cease “any activity related to ballistic missiles designed to be capable of delivering nuclear weapons” -- albeit for a limited period of time; and open its facilities to international inspectors, albeit with a 24-day advance warning.

As Sen. Bob Menendez, D-N.J., said, “We have gone from preventing Iran having a nuclear ability to managing it.”

The core problem with the JCPOA wasn’t so much its specifics – though many of us argued that it gave a lot to Iran while requiring little of Iran – but rather the nature of the Iranian regime, which since its birth almost 40 years ago has been a serial violator of international agreements and international norms of behavior.

Sure enough, just weeks after signing the JCPOA, the Iranian government was caught “sanitizing its suspected nuclear military site at Parchin,” as Bloomberg News reported in mid-2015. Indeed, in the short life of the JCPOA, Iran tested illicit long-range missilery, retained and refined computer models related to “the development of a nuclear-explosive device” (which is forbidden by the JCPOA), lied about the extent of its nuclear program, and conducted activity at the Fordo nuclear-enrichment facility (in violation of the JCPOA).

In addition, in the 1,029 days between President Barack Obama’s announcement of the deal’s implementation and President Donald Trump’s announcement of the deal’s demise, Iran obliterated the well-intentioned premise behind it. As Secretary of State Mike Pompeo explains, Iran has trained, transported and equipped Hezbollah fighters in Syria; deployed its own military personnel to Syria; “sponsored Shia militia groups and terrorists to infiltrate and undermine the Iraqi security forces”; bankrolled Houthi militias in Yemen and Houthi attacks against Saudi Arabia; backed Taliban fighters in Afghanistan with weapons and funding; conducted “covert assassination operations in the heart of Europe”; continued to hold Americans hostage; and continued to lie about the nature of its nuclear program.

“All of this,” Pompeo emphasizes, occurred “during the JCPOA.”

In an obvious signal to the United States and its regional allies, Iran in October lobbed medium-range missiles from its territory, over Iraqi airspace and into Syria. And Tehran has “spent its newfound treasure fueling proxy wars across the Middle East and lining the pockets of the Islamic Revolutionary Guard Corps, Hezbollah, Hamas and the Houthis,” Pompeo reports. Indeed, Iran’s military budget has increased by some 40 percent since 2015 (the year the JCPOA was inked). Not coincidentally, Tehran is now annually spending $15 billion to bolster Bashar Assad’s regime in Syria, $700 million to support Hezbollah, $150 million to fund pro-Iranian militias in Iraq, and $100 million to bankroll Palestinian Islamic Jihad and Hamas.

America’s objective going forward, according to Pompeo, is to “ensure Iran has no path to a nuclear weapon – not now, not ever” and to “counter the regime’s destabilizing activities in the region, block their financing of terror, and address Iran’s proliferation of missiles and other advanced weapons systems.”

There are a number of actions the United States could take to pursue and attain those objectives.

Sanctions The re-imposition of sanctions is hurting the Iranian economy. Iran’s currency has lost 60 percent of its value since last summer. Iranian oil exports are down 62 percent since May. Boeing and the French energy firm Total have pulled out of multibillion-dollar investment deals with Tehran. There’s more – and worse – to come for Tehran’s economy, as European and Japanese firms make the easy business to decision to stay in Washington’s good graces by steering clear of Iran. All that said, today’s sanctions will not be as smothering as those before the JCPOA came into force, owing to the fact that Russia, China and some in Europe still support the deal.

Cyber operations Trump recently authorized “offensive cyber operations” against hostile regimes to defend U.S. interests. Hopefully, Cyber Command is using that authorization to develop and execute a cyber-campaign aimed at further stunting Iran’s missile and nuclear programs, just as the Bush and Obama administrations did with the Olympic Games operation.

Missile shield The October missile salvo into Syria is only the latest evidence of Iran’s missile capabilities. In 2015 and 2016, Iran tested missiles capable of delivering nuclear weapons – in violation of U.N. Security Council resolutions. In 2017, Iran launched a rocket capable of delivering satellites into orbit, prompting the United States, Britain, France and Germany to declare that such rockets “are closely related to those of ballistic missiles, in particular to those of an intercontinental ballistic missile.” And the DNI reported in 2018 that “Iran has the largest ballistic missile force in the Middle East and can strike targets up to 2,000 kilometers from Iran’s borders.”

To answer this threat, the United States is working with allies in Europe and the Middle East to construct a web of defenses against Iran’s missile arsenal. The United States opened its first military base on Israeli soil late last year. The base is expressly for “operating a missile-defense system,” Real Clear Defense reports. The UAE was the first foreign government to purchase a THAAD anti-missile battery. The State Department recently approved Saudi Arabia’s request for a THAAD system. And spurred by Iran’s missile threat, NATO and the United States stood up an Aegis Ashore anti-missile battery in Romania in 2016; another is scheduled to come online in Poland in 2020.

North Korean leverage For several years, defense and intelligence officials have pointed to Iran-North Korea cooperation on nuclear weapons and missile technology. As the United States and North Korea edge toward an agreement to denuclearize the peninsula and turn the 1953 armistice into a full-fledged peace treaty, the Trump administration should make any agreement contingent upon Pyongyang expelling all Iranian officials and disclosing records of any exchanges with Iranian scientists, military personnel or government agents.

All of this must be undergirded by American military might.

After the United States withdrew from the deal, Tehran began conducting air and naval exercises to practice closing the Strait of Hormuz, and Iranian officials renewed their threats to close the vital waterway, which carries 30 percent of all the crude oil delivered by sea. In September, Tehran deployed nearly 100 naval vessels in and around the Strait of Hormuz. Moreover, the Iranian navy has engaged in 72 unsafe, provocative and/or illegal maneuvers near U.S. Navy assets since 2015, according to the DNI report.

Although the president has warned Tehran that it will “suffer consequences” for such behavior, he needs to articulate a cogent and unequivocal “Hormuz Doctrine,” making it clear that any attempt to disrupt international commerce flowing through the Strait of Hormuz or to deny freedom of navigation in this international waterway will be regarded as an attack on the strategic interests of the United States – and will be repelled by any means necessary. The president need not define what the response will look like, but he needs to put Tehran on notice that it will not be permitted to hold hostage the world’s energy supplies.

Of course, those words must be backed up by actions – and assets. That means more Navy assets in the region. At the height of President Ronald Reagan’s rebuild, the Navy boasted 594 ships. When President George W. Bush launched the first counterstrokes against al-Qaida, the Navy deployed 316 warships. But today’s fleet, in the wake of the bipartisan gamble known as sequestration, numbers just 277 active deployable ships. These numbers aren’t close to America’s maritime needs. “For us to meet what combatant commanders request,” according to former CNO Adm. Jonathan Greenert, “we need a Navy of 450 ships.” A government-funded study concludes that the United States needs 14 aircraft carriers (the Navy has 10 active), 160 cruisers and destroyers (the Navy has 84), and 72 attack submarines (the Navy has 52).

During Iran’s provocative wargames in the Strait of Hormuz in September, all the United States could muster in response was "a single guided-missile destroyer and a handful of coastal patrol craft,” as the U.S. Naval Institute reports. “The closest carrier strike group was on the other side of the Atlantic, operating off the coast of Canada.” Doubtless, Iran’s leaders took note.