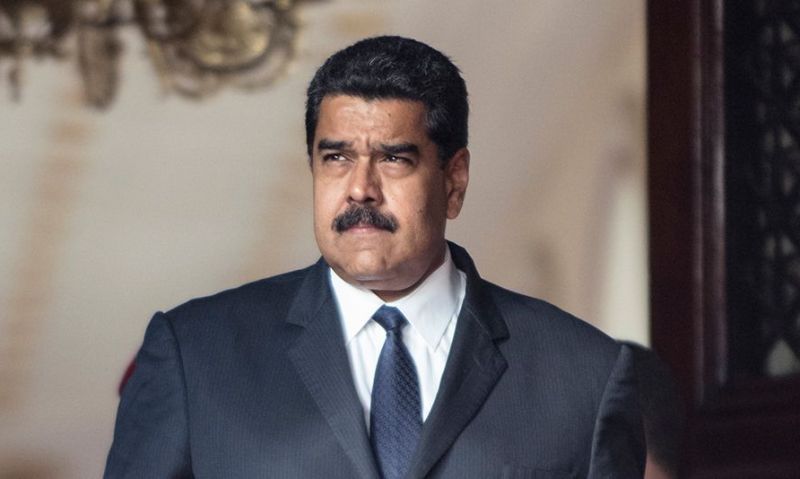 It sounds like something out of Syria or Somalia: 2.3 million refugees (and counting), millions more starving, 300,000 on the verge of death, thousands suffering with and dying from preventable diseases, an illegitimate government brutalizing its people, an entire region staggered by a failed state. But this latest humanitarian mega-crisis is found right here in our neighborhood, in the once-prosperous, once-stable nation of Venezuela.

For too long, we have misunderstood and misdiagnosed the situation in Venezuela as a case of a corrupt regime spawning a failed state. A more accurate label may be a hostage crisis – but on nationwide scale. The latest evidence of this is Nicolas Maduro’s refusal to allow humanitarian aid into the country, using military personnel and semi-trailer trucks to blockade a bridge connecting Colombia and Venezuela.

Before discussing Washington’s options in Venezuela, it’s important to spend a moment discussing just how bad the situation has become in Maduro’s prison state.

Venezuela’s annual inflation rate is a staggering 1,300,000 percent. That’s 1.3 million percent, and it could reach 10 million percent by end of this year. According to the IMF, Venezuela’s GDP fell by 18 percent in 2018 – “the third consecutive year of double-digit declines in real GDP.” The IMF describes the situation in Venezuela as “similar to that in Germany in 1923.”

The IMF is referencing the Weimar Republic, the post-World War I government of Germany beset by political sclerosis and economic chaos. In Weimar Germany, the currency became so worthless that Germans used marks as kindling in their ovens. In Weimar Venezuela, the currency is so worthless that Venezuelans are using bolivares to make wallets, purses and sculptures. As the Miami Herald reports, the value of 1,000 bolivares is 17 U.S. cents (and falling every day), while a handbag made with those bolivares sells for $13.

Without a functioning economy, without a responsive government, without the wherewithal to allow the market and civil society to meet the needs of the people, Venezuela is unraveling.

But rather than using government as a servant of the people, Maduro has turned it into a tool of oppression. According to the Organization of American States (OAS), the Maduro regime has carried out 12,000 arbitrary detentions, engaged in the “criminalization” of duly elected opposition politicians, carried out “state-orchestrated human suffering” by withholding food, medical supplies and government services from groups and individuals affiliated with regime opponents, and committed torture, sexual violence, extra-judicial executions and other “crimes against humanity.”

Why and how did an economically prosperous and politically stable nation devolve into such privation and chaos? The answer is simple but sad: Maduro’s predecessor, Hugo Chavez, nationalized the economy by seizing control of the oil, mining, steel, banking, telecommunications, tourism, transportation and agriculture sectors. This de-diversified economy proved unable to keep up with the dynamism of the global free-market system and wholly unable to meet the needs of the Venezuelan people. In parallel, the Chavez-Maduro regime used Venezuela’s oil wealth like a personal piggy bank; dispensed the state’s largesse to amass power; and upended the nation’s political system by flouting the constitution and rule of law, bypassing and ultimately delegitimizing the duly elected National Assembly, using the police and National Electoral Council against political opponents, politicizing the military, and governing by executive fiat. Along the way, the regime took over television stations, the Internet and nongovernmental organizations, thus shrinking Venezuela’s civil society.

It’s no wonder why Juan Guaidó has rallied a diverse coalition of Venezuelans and more than 40 countries to support him as interim president. As head of Venezuela’s National Assembly, Guaidó is technically Venezuela’s only legitimate leader, given that Maduro’s 2018 election and 2019 inauguration were carried out via extraconstitutional means.

Guaidó has called Maduro’s aid blockade a “crime against humanity” – and rightly so. It’s estimated that tens of thousands of Venezuelans will die without outside aid. But Maduro has dismissed aid shipments from the United States and other nations in the Americas as “fake humanitarian aid,” claiming that Venezuela’s manmade famine and societal collapse have been “fabricated by Washington.”

Asked if he would be open to an international force intervening to rescue his country, Guaidó says he will consider “everything that is necessary ... to save human lives.”

That brings us back to Washington’s options in Venezuela.

“All options are on the table,” President Donald Trump has said of the chaos in Venezuela.

In a surprising echo of Trump, one Latin American official says the international community should keep all options on the table, including “military intervention” to “overthrow” Maduro. This is surprising because the words were spoken by Luis Almagro, secretary general of the OAS – not an organization given to military threats.

The Trump administration took an important step in January by officially recognizing Guaidó as Venezuela’s legitimate leader. “We call on Maduro to step aside in favor of a legitimate leader reflecting the will of the Venezuelan people,” Secretary of State Mike Pompeo said at the time. “The United States supports President Guaidó as he establishes a transitional government, and leads Venezuela, as the country prepares for free and fair elections.”

Even though Trump has expressed reservations about humanitarian intervention – he declared before his election, “If we are going to intervene in a conflict it had better pose a direct threat to our interest” – he observed more recently that “We have troops all over the world in places that are very, very far away ... Venezuela is not very far away and the people are suffering, and they are dying.”

This signals an evolution for Trump and a realization that leading a superpower with a conscience sometimes requires defending more than America’s interests.

There are real threats Venezuela’s crisis could spawn and is already spawning: More than 2.3 million people have fled Venezuela. A million have fled to Colombia, 500,000 to Peru, 290,000 to the United States, 220,000 to Ecuador, 130,000 to Argentina. According to Adm. Craig Faller (SOUTHCOM commander), “Migration from Venezuela is on track to approach the scale of the Syrian refugee crisis, straining the capacity and resources of its neighbors. The United Nations estimates that 5.3 million Venezuelans will have fled their country by the end of 2019.”

This exodus – and the political-economic chaos that triggered it – are destabilizing Venezuela’s neighbors and indeed much of the hemisphere. Some governments in South America recognize Maduro; others recognize Guaidó. After taking in hundreds of thousands of refugees, Colombia has dispatched its army to the border to hold back the tidal wave. Brazilians are chasing away Venezuelans at the border and building barricades. Argentina, Canada, Colombia, Chile, Paraguay and Peru have referred the Maduro regime to the International Criminal Court for “crimes against humanity.”

In addition, we know that a) jihadist groups seek out and thrive in lawless lands, and b) jihadist groups have made inroads in South America. It doesn’t strain the imagination to contemplate these groups – and their state sponsors – setting up shop in the ungoverned areas of Venezuela.

Moreover, Russia and China, which already have security and economic ties to the Maduro regime, could use Venezuela’s chaos as a pretext to expand their footprints in South America. In fact, Moscow dispatched 400 Russian military contractors to Caracas in February. As Pompeo has said, “The Cubans are there; the Russians are there; the Iranians [and] Hezbollah are there. This is something that has a risk of getting to a very, very bad place.”

Pence calls the situation in Venezuela a “threat to our collective security.”

“An explosion is coming,” warns former NATO commander Adm. James Stavridis. “And when it does, we should expect a great deal of violence and massive refugee flows.”

Stavridis, Pence and Pompeo know that Venezuela’s security forces are beginning to splinter into pro- and anti-regime camps, which increases the likelihood that the Venezuelan crisis will devolve from civil unrest to full-blown civil war. Indeed, rebel soldiers have launched attacks against military bases outside Caracas; the number of soldiers arrested for treason is rising rapidly; an anti-regime group deployed drones in an effort to assassinate Maduro; small handfuls of low-level troops have seized police stations and raided weapons depots; and in January a Venezuelan National Guard unit pledged allegiance to Guaidó’s shadow government.

A call for help from the National Assembly and the Venezuelan military would be the best alternative, as it would help ensure that foreign intervention forces are entering a permissive environment. Of course, that would require the military to shift allegiance from Maduro to Guaidó. So far, Maduro’s generals, who have been richly rewarded for their loyalty, have shown no signs of rebelling.

To prepare and brace for the worst, Stavridis recommends standing up “a State Department-led interagency working group to craft a strategy for dealing with a possible civil war ... planning by the Department of Defense for humanitarian operations ... (and) advance stationing of supplies and medicines by the U.S. Agency for International Development in the Caribbean.”

To avoid the perception of a return of “Yankee imperialism” and to deprive Maduro of rhetorical ammunition, Washington should continue to let the Lima Group take the lead – while working behind the scenes with the OAS, CARICOM, Association of Caribbean States, MERCOSUR and other regional partnerships where appropriate to lay the groundwork for a multilateral humanitarian effort.

Like any hostage crisis, the goal in Venezuela is to rescue the innocent. A U.S. invasion (no matter how well-intentioned) could undermine that goal, whereas an OAS humanitarian intervention (that happens to involve U.S. personnel) could serve that goal. Pence put it well in an address to South American leaders: “What we do to see democracy restored in Venezuela, we will do together.”