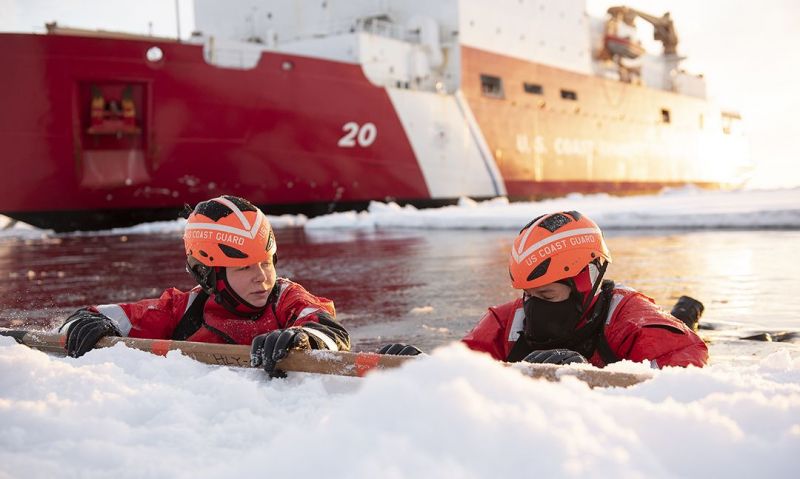 Russian strongman Vladimir Putin has announced plans to use his country’s fleet of nuclear-powered icebreakers to dramatically expand the amount of shipping flowing through the Arctic -- and thus strengthen Russia’s hand in the resource-rich region.

“We need to make the northern sea route safe and commercially feasible,” he says. But there’s much more at stake here than commerce and shipping. As former Defense Secretary James Mattis observed, “The Arctic is key strategic terrain” -- especially for the United States and its NATO allies.

There’s no mystery as to why Putin is interested in the Arctic.

First, the fabled Northwest Passage, once frozen most of the year, is thawing for longer stretches of time. This cuts some 4,000 nautical miles off a trip from Europe to Asia, which means Putin is positioned to tap into a lucrative new shipping lane.

Second, Putin is eyeing the Arctic’s vast resource riches. The Arctic holds upwards of $30 trillion in oil, natural gas, minerals and other natural resources. Indeed, the U.S. Geological Survey estimates the Arctic holds 1,670 trillion cubic feet of natural gas and 90 billion barrels of oil, equaling 30 percent of technically recoverable global reserves of oil and 13 percent of gas. (About a third of the oil is in Alaskan territory.)

In 2015, as AP reports, Russia submitted a dubious claim to the United Nations for more than 463,000 square miles of Arctic sea shelf. In fact, Russia lays claim to half the Arctic Circle.

Russia’s Arctic claims are dubious because they are based on a questionable interpretation of an underwater ridge linking to the Russian landmass. Russia argues this ridge is an extension of its own continental shelf. Other Arctic nations disagree. In 2010, as the United States and Canada began a joint expedition to collect data on the extended continental shelf, the U.S. government emphasized that America has "an inherent national interest in knowing, and declaring to others with specificity, the extent of our sovereign rights with regard to the U.S. extended continental shelf. Certainty and international recognition are important in establishing the necessary stability for development, conservation and protection of these areas.”

More troublesome than Russia’s outsized Arctic claims is how Putin is backing up those claims: In 2008, a Russian general revealed plans to train “troops that could be engaged in Arctic combat,” ominously adding, “Wars these days are won and lost well before they are launched.” By 2016, Russia had stood up six new bases above the Arctic Circle, opened 16 ports and 13 airfields in the region, and deployed sophisticated surface-to-air missile batteries in the Arctic.

Russia recently resurrected a military base on Kotelny Island, well inside the Arctic Circle. Russia has conducted airborne-assault exercises, amphibious landings and large-scale wargames across the Arctic. A 2015 Russian exercise in the Arctic, for instance, involved 80,000 troops, 220 aircraft, 41 ships and 15 submarines.

As NATO Secretary General Jens Stoltenberg concluded during his recent address to Congress, Russia is engaged in “a massive military buildup from the Arctic to the Mediterranean.”

Speaking of China, Beijing wants a slice of the Arctic, too. China has unveiled plans for a “Polar Silk Road development initiative.” Chinese vessels have begun transiting Arctic passageways. And China is building heavy-duty icebreakers. Beijing justifies its unwelcome appearance in the region by calling itself a “near Arctic state.” (By that logic, the United States is a near Asian state.) In any event, it doesn’t take a Kissinger to conclude that Beijing and Moscow are coordinating their efforts to maximize their Arctic reach.

The good news is the United States isn’t standing still. The Trump administration is drafting a new Arctic defense strategy, which will outline America’s long-term goals in the Arctic. “The Arctic region has strategic and economic importance,” President Donald Trump has observed.

“The strategic value of the Arctic as our first line of defense has reemerged, and USNORTHCOM and NORAD are taking active measures to ensure our ability to detect, to track, and defeat potential threats in this region,” reports Gen. Terrence O’Shaughnessy, commander of NORAD and NORTHCOM.

Toward that end, the Air Force is preparing for an “increased emphasis on joint operations” throughout its Arctic footprint. By 2022, Alaska will house more F-22s and F-35s -- America’s most-advanced fighter-bombers -- than anywhere on the planet, as Air Force officials reported in January.

Navy officials are planning to send surface ships into the Arctic this year and are mulling proposals to stand up “a strategic port up in the Bering,” according to Secretary of the Navy Richard Spencer. Last fall, Washington dispatched USS Harry S. Truman into the Arctic Circle, the first deployment of a U.S. aircraft carrier above the Arctic Circle since 1991.

The Army is sending Ranger regiments through cold weather operations training to prepare them for Arctic warfare.

Even so, the United States is not yet well postured to defend its Arctic interests. “America has got to up its game in the Arctic,” according to Mattis.

The Pentagon recognizes what too many Americans have forgotten: The United States is “an Arctic nation with broad and fundamental interests in the Arctic,” as the Obama administration’s Arctic policy explained. After all, a large swath of our 49th state lies inside the Arctic Circle; some 27,000 troops are based in Alaska; U.S. troops man a key military base above the Arctic Circle (Thule Air Base in Greenland); and close allies Canada, Denmark, Iceland and Norway are Arctic nations.

Those nations share one other important common denominator: NATO membership. And that points the way toward a response to Russia’s attempted Arctic landgrab. If the United States and its Arctic allies can agree on a common approach to Arctic security, combine their capabilities and play niche security roles in the Arctic, they can deal with Moscow from a posture of strength and deter aggression.

Interestingly, NATO leaders have been talking about Russia’s threat to Arctic security for more than a decade.

Noting that “the Arctic is extremely important” and that there’s “an increased Russian presence with modern military capabilities in the Arctic,” Stoltenberg reports that “NATO is adapting our military posture” in the region.

In early 2009, NATO officials envisioned a “military presence” in the Arctic and pointedly declared the Arctic a region of “strategic interest to the alliance.”

Spurred by Russia’s actions, several NATO allies are putting muscle behind these words-- and getting serious about defending the Arctic from Russian poaching.

In March and April, hundreds of troops from Canada, France, Norway, and non-NATO members Finland and Sweden participated in Arctic exercises in northern Canada focused on logistics and carving landing strips out of the ice. Last fall, 50,000 troops, 10,000 ground vehicles, 250 warplanes and 65 warships from NATO and partner countries participated in a cold-weather exercise known as Trident Juncture, which spanned parts of Norway, the North Atlantic and the Baltic Sea.

Denmark has stood up an Arctic military command, strengthened its military presence in Greenland (a Danish possession) and deployed an Arctic Response Force.

As part of its “High North initiative,” Britain is expanding its role in the Arctic, ordering new maritime patrol aircraft to counter Russian submarine activity in and around the Arctic, and conducting annual training operations in Norway. “As part of the new Arctic strategy, the (Royal) Marines’ training will become joint with Norway on a long-term basis and integrated into Norway’s defense plan,” British Defense Secretary Gavin Williamson recently reported.

All the ingredients for a coordinated NATO approach to Arctic security are here. As they learned during the Cold War, NATO and its partners can achieve more by pooling their assets, identifying and pursuing common interests, and coordinating plans and deployments than they can by going it alone.

There are many paths the alliance could take to begin coordinating its actions in the Arctic. For example, the alliance could form a working group or committee dedicated to Arctic issues, along the lines of its Nuclear Planning Group. Another possibility is the partnership model that NATO has successfully used to coordinate responses to regional challenges. Yet another option is a center focused on Arctic issues, perhaps modeled after NATO’s Joint Training Center or Cooperative Cyber Defense Center. NATO could even stand up a full-fledged Allied Command-Arctic.

When dealing with Putin, what matters is actions -- his and ours. America and its allies can use NATO as a venue to forge a coordinated response to Putin’s Arctic gambit, play to their strengths, block another Putin landgrab, and ensure that the Arctic’s bounty is developed in a transparent manner governed by the rule of law and sound trade practices. Or they can allow Putin quite literally to divide and conquer.