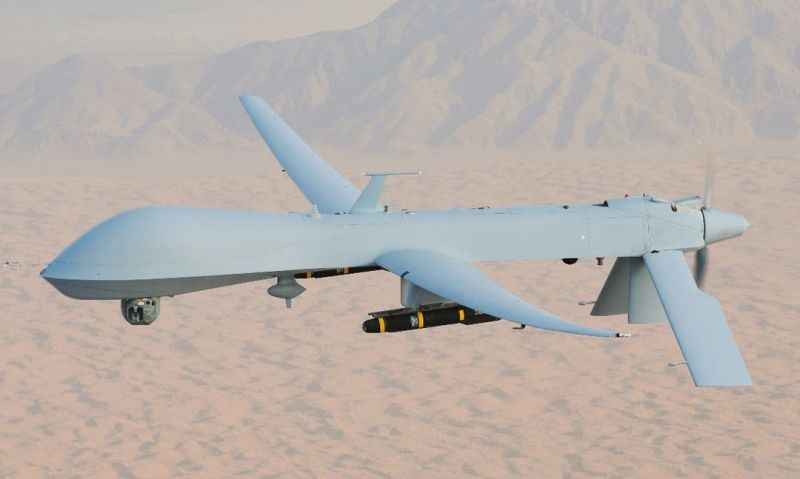 The September drone attacks targeting Saudi oilfields make it obvious that the age of drone warfare is upon us. What’s not so obvious is whether our framework for understanding, deploying and defending against unmanned combat aerial vehicles (UCAVs) has caught up with this revolutionary technology.

PAST For many years, we thought of drones as something we use against our enemies – not in terms of the threat drones pose to us, our interests and our allies. Using just 10 armed drones, the Iranian-backed Houthi drone attacks targeting the Saudi oilfields “reduced crude oil production by 5.7 million barrels a day – about half the kingdom's output,” according to the BBC. The attacks in Saudi Arabia re-remind us that our monopolies on weapons systems – from the atomic bomb to stealth and cyber to UCAVs – are always fleeting.

This didn’t happen overnight. The use of drones in war has evolved and advanced over decades. Recall that during the Gulf War in 1991, U.S. warships used drones to track enemy movements and to aid in targeting. But sailors aboard USS Missouri found another use for their drones. Rather than face the business end of Missouri’s big guns, Iraqi soldiers surrendered to its drones. The Baltimore Sun reported it this way: “It had to be a military first ... an Iraqi soldier spinning around and around with his hands in the air trying to attract the attention of the pilot of a small plane flying above him. Only it wasn’t a plane. It was a pilotless drone.”

The drone had evolved from playing a passive role in identifying targets to being an active player in what was happening in the trenches.

Drones closed the circle in Yemen a decade later, when the CIA converted a Predator drone designed for reconnaissance into a ground-attack warplane. Retrofitted with Hellfire missiles, the killer drone targeted and eliminated the mastermind of the USS Cole attack. Thus was born the unmanned combat aerial vehicle.

At the time, only the United States deployed UCAVs. In those years when America enjoyed a UCAV monopoly, American UCAVs disabled the convoy carrying Moammar Qaddafi in Libya, killed al-Qaida’s Abu Yahya al-Libi in Pakistan and Anwar al-Awlaki in Yemen, eliminated Taliban leader Akhtar Mansour in Pakistan, eviscerated the Taliban’s ranks across the AfPak theater, and pounded al-Shabaab in Somalia.

In 2013, responding to an essay I authored about the need to understand the full implications of UCAVs, a commenter dismissed my concerns that 75 countries had drone programs underway by noting, “In reality, of these 75 countries, only three are known to have UCAVs.”

Even then, it was evident that several regimes – both hostile and friendly – were developing UCAVs. China and Russia were at the top of that list. Germany and France were procuring armed drones. Hezbollah had started to acquire drones. And it was suspected that North Korea was retooling its drones into offensive weapons.

My concerns were well-founded. By 2019, more than 25 countries would field UCAVs, including Russia, China, North Korea, Serbia and Iran. In addition, terrorist groups and other non-state actors have deployed armed drones: Hezbollah against Israel and against Sunni terror cells, Houthis against Saudi Arabia, Hamas against Israel, anti-government forces against Venezuelan strongman Nicolas Maduro, ISIS against coalition forces in Iraq.

Along with the United States, countries known to have conducted drone strikes include Britain, Nigeria, Pakistan, Turkey, Iraq and Israel. It appears France may have used UCAVs in operations in Mali. In addition, Iranian-manufactured drones likely under the control of Syrian or Iranian military personnel have dropped ordnance in Syria.

This proliferation of UCAVs poses a “growing threat to U.S. and allied military operations,” a RAND report concludes. The United States maintains restrictions on UCAV exports, in hopes of keeping them out of unsavory and/or untrustworthy hands. China and Russia have no such concerns.

It’s no mystery as to why UCAV technologies are proliferating: they eliminate risk to those pulling the trigger, and they cost a lot less than manned warplanes. A Predator drone, for instance, costs $4.5 million, while an F-35 costs $111 million, an F-22 $377 million. And owing to their size and range, UCAVs can conceal their home address far more effectively than the typical, non-stealthy manned warplane.

PRESENT Almost 20 years after America’s first foray into drone warfare, U.S. military and political leaders have embraced drones as their weapon of choice in the post-9/11 campaign of campaigns.

Yet these numbers tell only part of the story of how UCAVs are rapidly dislodging manned aircraft from the central role they have played in war-fighting since World War II -- and revolutionizing how the United States defends itself and targets its enemies:

• Reaper and Predator UCAVs conducted 33 percent of the sorties targeting ISIS in Iraq and Syria.

• The still-in-development B-21 bomber will be “capable of manned and unmanned missions.”

• The Navy has created a “drone command center” aboard USS Carl Vinson and will add another aboard USS Dwight D. Eisenhower.

• The Air Force is hiring civilian contractors to fly UCAVs and tasking personnel with no flight experience to drone operations.

• Before he left his post as chairman of the Joint Chiefs of Staff, Adm. Michael Mullen remarked, “There are those that see the JSF (F-35 Joint Strike Fighter) as the last manned fighter -- or fighter-bomber or jet -- and I’m one that’s inclined to believe that ... We’re at a real time of transition here in terms of the future of aviation.”

Add it all up, and it’s fair to conclude that we are witnessing the transformation of warfare before our very eyes. This isn’t the first revolution in warfare, of course. But it may be one of the most profound and most rapid -- and there’s more to come. Some of what lies ahead should give us pause.

The next step is for UCAVs to be empowered to attack targets autonomously. In his book “War Made New,” Max Boot notes that UCAVs equipped with “target-recognition systems” and “autonomous attack systems” are on the horizon. Under a mode of operation known as “self-learning autonomy,” drones will identify and attack targets based on predetermined conditions.

In fact, the Air Force’s Skyborg project is an effort to deploy by 2023 an autonomous UCAV that relies on AI technologies to fly the aircraft. Already, as Defense News reports, the Army’s Gray Eagle drones are empowered to ignore their operators’ commands -- or at least delay acting on those commands -- if the drone’s internal AI systems detect “a higher-level threat,” in which case the drone will focus on eliminating what it determines to be the more pressing threat.

Back on the ground, the Army is mulling “manned-unmanned teaming,” according to Army chief of staff Gen. James McConville.

Still, he has questions about the drone age. "You still need soldiers on the battlefield," as he explained during a video-link presentation covered by Military.com. "If you are watching me here on video, you don't get the same feeling as if you are in the crowd, and it's the same thing in combat."

Think about it: The political cost is high when a commander-in-chief loses personnel, but negligible when a commander in chief loses a robot or pilotless plane. Just compare the public’s non-reaction to the loss of drones during the Obama and Trump administrations with the international crises earlier administrations faced when manned aircraft were shot down: President Dwight Eisenhower weathered international humiliation after the Soviets brought down a U-2. President John Kennedy was pressed to go to war when a U-2 was shot down over Cuba. President Bill Clinton had to deal with a hostage crisis abroad and a political crisis at home when a Blackhawk was shot down in Mogadishu. President George W. Bush faced a Cold War-style crisis when China brought down a Navy reconnaissance plane.

Recall that today’s UCAV strikes are conducted under the auspices of a 2001 war resolution that authorized the president to target “those nations, organizations or persons he determines planned, authorized, committed or aided the terrorist attacks that occurred on Sept. 11, 2001 ... to prevent any future acts of international terrorism against the United States.” It would be a stretch to say this piece of legislation authorized -- 18 years later -- an autopilot war against targets in Pakistan, Afghanistan, Yemen, Libya, Syria, Iraq, Somalia, Mali and beyond. Those targets may indeed be enemies of, and threats to, the United States. But few, if any, of them “planned, authorized, committed or aided” the 9/11 attacks.

Many of the newcomers to the UCAV club are less discriminating in employing military force than the United States -- and less skillful. Let’s stipulate that America’s UCAV program is the best in the world. Yet the accident rate for the Reaper is 16.4 per 100,000 hours, while the accident rate for the manned F-16 is 4.1 per 100,000 hours. Unresponsive U.S. drones have crashed in eastern Iran, collided with manned aircraft and veered out of control. The Washington Post reports that a Predator based in Djibouti “started its engine without any human direction, even though the ignition had been turned off and the fuel lines closed.”

To be sure, manned aircraft have mechanical problems. But America’s manned warplanes don’t start on their own, don’t fly renegade sorties, don’t have to be chased down and destroyed, and don’t fly into friendly aircraft. If the best drones deployed by the best military on earth malfunction this often, imagine the accident rate for substandard drones deployed by substandard militaries. And then imagine the international incidents this will trigger. It would be ironic if the promise of risk-free war offered by drones spawned new risks for the United States and its allies.