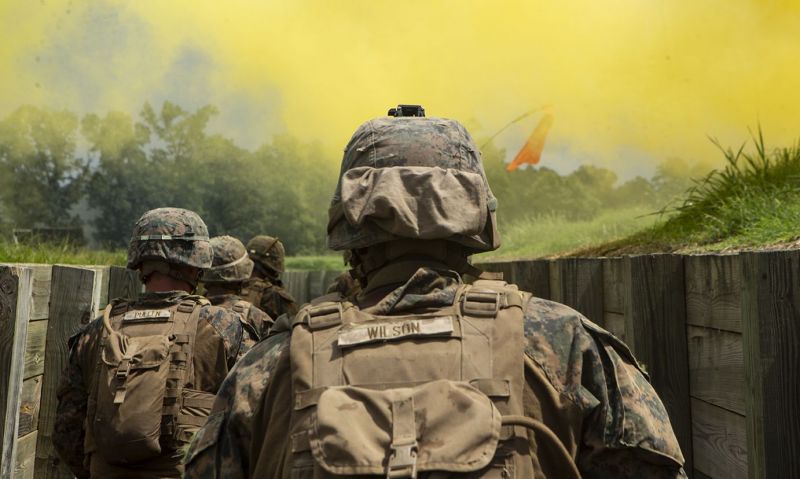 Even as America’s newest military branch focuses on defending U.S. interests and assets in space, the Army and Marine Corps are literally lowering their sights and focusing on a new/old domain that lies underground.

Defense Advanced Research Projects Agency raised more than a few eyebrows recently when it issued a request for access to tunnel systems under U.S. colleges and urban centers to assist the Pentagon in preparing U.S. troops for subterranean combat and disaster response.

This is just the latest in a growing list of Pentagon efforts to prepare for underground warfare.

In 2017-2018, the Army launched a $572 million effort focused on “training and equipping 26 of its 31 active combat brigades to fight in large-scale subterranean facilities,” as Military.com reports. The program is preparing infantry units to “navigate, communicate, breach heavy obstacles and attack enemy forces in underground mazes” such as sewers, subways and structures expressly designed for military use.

Why are the Army, Marines, SOCOM and Pentagon brass suddenly concerned about underground combat operations? The answer can be found on the nightly news and in the morning headlines.

Earlier this year, U.S. Customs and Border Protection officials discovered what they call the “longest ever” tunnel spanning the U.S.-Mexico border. Used by Mexican drug traffickers, the tunnel began in Tijuana and terminated in San Diego. It featured a railway, plumbing and ventilation, according to The Washington Post, which adds that more than 200 tunnels have been discovered by CBP agents.

Iranian soldiers were caught this spring building a tunnel in eastern Syria large enough to store and hide sophisticated weapons systems. That tunnel was targeted in airstrikes of unknown origin.

Last October, ISIS leader Bakr al-Baghdadi retreated into a tunnel as a U.S. assault team closed in on him.

In the past five years, Egypt has destroyed 3,000 tunnels in the Sinai. The tunnels were used to move terrorists, weapons, drugs and vehicles.

Then there is North Korea. In 1974, U.S. and ROK forces discovered a tunnel on the south side of the DMZ. When they investigated, a booby-trapped mine killed an American sailor and a Korean soldier.

“The tunnel was over two miles long, a third of which was on the South Korean side of the border, and had space enough for 2,000 soldiers to traverse it per hour,” one report detailed. As the years ticked by, other tunnels were discovered south of the DMZ. One was large enough to deploy 30,000 troops per hour into South Korea. It is “estimated that that there are between 16 and 20 more infiltration tunnels that have escaped detection.”

Almost as worrisome are the tunnels North Korea has constructed to hide, hold and transport weaponry, troops and commanders inside North Korea. “Reports from North Korean defectors and satellite imagery indicate Pyongyang has built thousands of tunnels into mountains and hillsides to house artillery, ammunition and medical supplies,” VOA reports. Some of the tunnels – which number around 5,000 – are believed to be deep and wide enough to hide and/or move large formations of troops, heavy artillery and WMDs.

Put another way, if U.S.-ROK forces are ever ordered north of the 38th Parallel – whether to conduct a humanitarian, decapitation or counterproliferation operation – the odds are high they will have to go underground at some point. It won’t be easy. Military planners warn that there are numerous aspects of subterranean warfare that are unlike any other theater: the pitch-black darkness, lack of oxygen, communications breakdowns, all of which triggers disorientation.

“Tunnels and caves,” writes Hudson Institute’s Arthur Herman, “have a long history in warfare stretching back to biblical times.”

In April 1862, Union troops discovered “a network of underground shelters” used by the Confederate army near Yorktown, as one Army historical analysis notes. In 1864, Union forces attempted to break through at Petersburg by tunneling under Confederate lines and then detonating a massive amount of gunpowder. As one historical account explains, the so-called Battle of the Crater saw a Union regiment from the 48th Pennsylvania Infantry tunnel under the Confederate fortifications. “The soldiers, experienced miners from Pennsylvania’s anthracite coal regions, dug for nearly a month to construct a horizontal shaft over 500 feet long” and filled with four tons of gunpowder. The ensuing explosion destroyed a Confederate battery and most of an infantry regiment. But Union forces were unable to take advantage of their tunnel attack. In fact, many were left as sitting ducks in a crater of their own making.

Herman notes that World War I’s “trenches were essentially a static system of tunnels that served as front lines for each side.” In an echo of the Union’s tunnel attack at Petersburg, the British dug more than 20 tunnels under the German lines and filled them with 450 tons of TNT. The British attack proved far more successful than the Union’s, as it resulted in an explosion “so enormous that ... 10,000 German soldiers were instantly killed,” according to Herman.

During World War II, France’s Maginot Line consisted of “an elaborate underground system of bunkers and supply depots supporting 22 large, aboveground forts and 36 smaller forts, all connected by a railway, pulled by diesel-powered locomotives, that passed through a network of tunnels.” The German answer to the Maginot tunnels was simple and ingenious: bypass them, cut them off and don’t fight inside them.

Of course, sometimes that’s not an option, as U.S. forces discovered on many of the atolls and islands occupied by Imperial Japan. U.S. troops encountered tunnel defenses in Tarawa, Iwo Jima and Okinawa. In the latter, a Japanese command post consisted of a web of tunnels 1,475 feet long capable of holding 4,000 troops. Okinawa claimed 12,000 American troops, 110,000 Japanese troops and 145,000 Okinawan civilians. “One of the factors that contributed to these ghastly statistics was the extent to which the killing took place underground,” the Japan Times concludes.

A report published by the Army’s Modern War Institute (MWI) adds that “Soldiers and Marines battled entrenched and underground Chinese troops in Korea.” And in Vietnam, “the 173rd Airborne Division encountered thousands of tunnels stretching hundreds of miles from the outskirts of Saigon to the Cambodian border.”

The U.S. government got into the tunnel-building business, too. During the Cold War, Washington built tunnels and other underground systems for defense, command and control, and continuity of government operations at places like Cheyenne Mountain, Mount Weather and the Greenbrier. Some were declassified and shut down as the Cold War ended. Others, like Cheyenne Mountain’s NORAD, are still in use. Still others are likely operating but classified.

In the early phases of the global war on terrorism, Special Operations personnel, Marines and an Army biochem unit planned a 12-hour operation to clear an al Qaeda hideout in eastern Afghanistan. Instead of a quick mop-up operation, the assault force spent nine days dismantling and destroying a labyrinthine system of 70 tunnels. Remarkably and ironically, the tunnel network “was built with the help of U.S. money in the mid-1980s by mujahedin forces fighting the Soviet occupation of Afghanistan,” The Washington Post reported at the time.

In both Iraq wars (1990-1991 and 2003-2011), the enemy used tunnels to hide weaponry and/or conduct ambushes. “In Operation Desert Storm,” MWI points out, “the Air Force deemed underground Iraqi bunkers the most secure places in the country.” In Operation Iraqi Freedom, al-Qaida in Iraq used a network of tunnels to store weapons, hide and conduct attacks, as an Army report destroyed details.