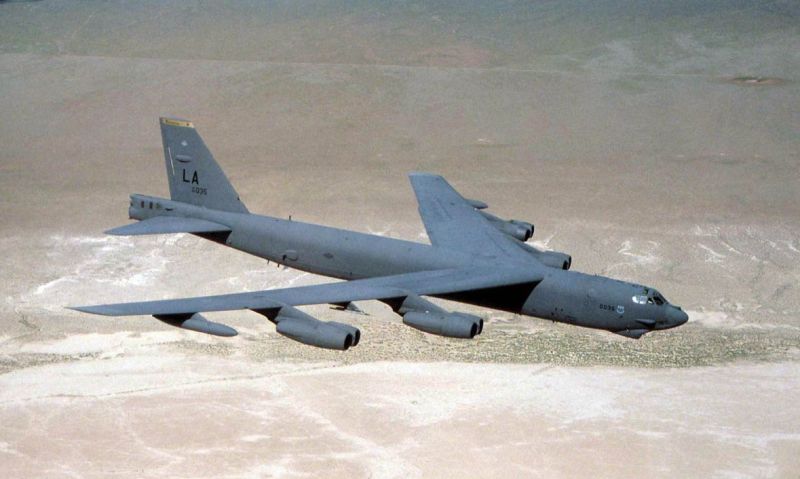 A trio of B-1B bombers recently screamed over the East Siberian Sea, just beyond Russian territory. That followed on the heels of six B-52s rumbling across the airspace of all 30 NATO members.

Dubbed “Allied Sky,” the single-day exercise served to demonstrated “the United States’ powerful commitment to NATO,” according to NATO Secretary General Jens Stoltenberg. “Allied Sky” followed the deployment of three B-2s to Diego Garcia. The arrival of B-2s in Diego Garcia, in turn, followed the deployment of B-1Bs to Guam for training exercises with the Japanese air force and USS Ronald Reagan carrier strike group. The intended audiences in Russia and China certainly got the message.

Equally certain: those audiences know that the youngest B-52 came off the assembly line in 1962, that America only has 20 B-2s, that the B-1B’s flight hours have been severely limited, and that America’s entire bomber fleet numbers just 158 planes.

Those dwindling numbers and aging airframes wouldn’t be a concern if our enemies were beating their swords into plowshares. But with China on the rise, Russia on the march, the Middle East on fire, and our allies in Europe and the Pacific on edge, we know the very opposite to be true. In this environment, 158 bombers – let alone 140 -- aren’t nearly enough to deter our enemies and defend our interests.

America’s bombers conduct a huge share of the Air Force’s kinetic strikes. “During Desert Storm, B-52s delivered 40 percent of all the weapons dropped by coalition forces,” according to the Air Force. During Allied Force, six B-1Bs delivered “more than 20 percent of the total ordnance while flying less than 2 percent of the combat sorties,” the Air Force adds. RAND notes that the bomber force delivered 11,000 out of the more than 23,000 U.S. air-to-ground munitions dropped during Allied Force. In Allied Force, B-2s were “responsible for destroying 33 percent of all Serbian targets in the first eight weeks” of the operation, according to an Air Force analysis. In Afghanistan, U.S. bombers accounted for 80 percent of the munitions dropped during the first two weeks of the operation, according to Mel Deaile, a professor at the Air Command and Staff College and a former B-2 pilot.

Moreover, 46 nuclear-capable B-52s and B-2s are always on call as part of America’s nuclear-deterrent force. Nor can we forget that bombers are constantly deployed to conduct strategic-signaling operations, like those described in the introduction of this piece -- flights over the South China Sea, Arctic Circle, Taiwan Strait, South Korea, Australia and Ukraine; deployments to Guam and Alaska and Britain; visits to Diego Garcia and Qatar and Saudi Arabia.

Building up. Add it all up, and America’s Air Force needs more bombers and newer bombers – soon. That explains why Air Force leaders are upping the projected bomber fleet to “just north” of 220 airframes, as Gen. Timothy Ray, commander of Air Force Global Strike Command, explained in an interview with National Defense magazine. To reach the 220-mark, the Air Force plans to procure 100 B-21s, while updating and retrofitting some of the existing fleet of B-1Bs and B-52s.

The B-1Bs may end up carrying hypersonic weapons, according to the report. The plan is to retire the B2 (America’s sole radar-evading stealth bomber) in the 2030s.

That means between now and 2025, when the B-21 comes online, just 12 percent of America’s bomber fleet will be able to penetrate and survive a near-peer enemy’s air defenses. Yet another cause for concern: only six B-1Bs were rated mission capable in late 2019.

As the Air Force Almanac puts it, “today’s bombers are better” than their predecessors, but “so are adversaries’ air defenses. This is a security risk.”

Indeed, China is building a dense, multilayered defensive bubble around its territory. The approaches to the PRC bristle with sensors and surface-to-air missiles (SAMs), and this kill zone is growing as the PRC emplaces SAMs and other anti-aircraft systems on its illegal islands in the South China Sea. Plus, the PRC is fielding an increasingly high-tech, power-projecting air force. The PRC deploys 2,800 combat aircraft, including 150 bombers. Beijing’s bomber fleet includes the H-6N (an upgraded derivative of a Russian bomber) and the soon-to-be-unveiled H-20 (a long-range stealth bomber similar to the B-2).

Russia fields 125 bombers, with as many as another 40 on order, according to World Air Forces 2020. More worrisome, Russia has deployed its extended-range S400 air-defense system to Kaliningrad, Syria and likely Libya. And Russia’s S300 air-defense system has been deployed in Venezuela. These strategically positioned anti-air systems give Russia the ability to hold at risk aircraft flying through vast swaths of the eastern and southern Mediterranean, the Caribbean, and NATO airspace in Poland, the Baltics and the Baltic Sea.

Mushrooming challenges. How and why did this happen?

First, as the Lexington Institute explains, “When the Cold War ended, the Defense Department terminated production of the B-2 and ceased development of new bombers for the first time since the 1920s.” The consequence of this bomber-building holiday is a U.S. bomber fleet that’s too small and too old.

Second, since Sept. 11, 2001, America’s military has largely focused on dismantling terrorist networks and clearing the spawning grounds of terrorism – and understandably so. However, this expended finite resources that otherwise would have been allocated toward new weapons systems designed to deter peer threats like China and Russia.

To deter Russia and China in what increasingly feels like Cold War 2.0, the United States needs to build more bombers and upgrade its existing bombers – and that means more defense spending. Given America’s mushrooming debt, that won’t be easy. Today’s defense budget is 3.1 percent of GDP, half what it was for much of Cold War 1.0.