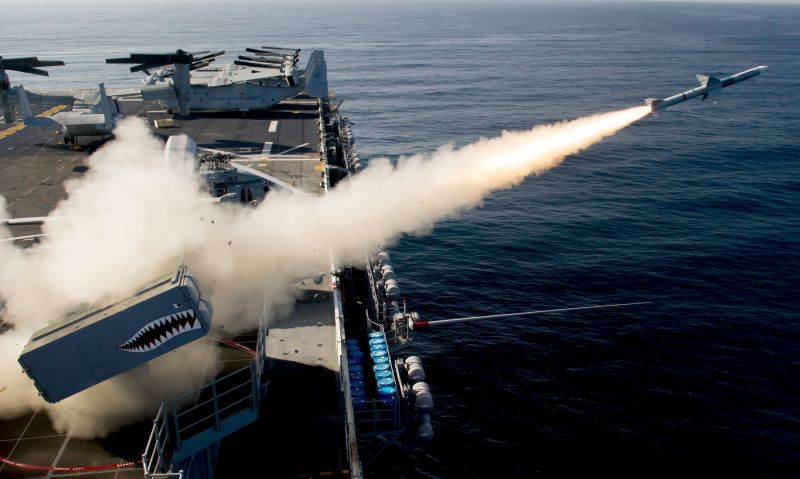 “For the first time, we’re not chasing anyone,” Russian strongman Vladimir Putin declared in a section of his 2020 State of the Nation address focused on Russia’s military. “We’re not catching up with anyone. On the contrary, other states will have to create weapons that Russia already has.”

On this issue, it appears Putin is not bluffing.

A recent analysis by the Economist magazine illustrates the dramatic advances and investments Russia has made in its military in recent years.

“Russian military expenditure approximately doubled between 2005 and 2018,” according to the report. Russia now spends about 4 percent of GDP on its military.

On the strength of that spending binge, Russia has added 600 new warplanes, 840 helicopters, 2,300 drones, and some truly eyebrow-raising (and nightmare-causing) weapons systems: a hypersonic missile that can fly 27 times the speed of sound, a nuclear-tipped high-speed underwater drone designed to target and render coastal areas uninhabitable, a nuclear-powered cruise missile designed to loiter in the atmosphere – and evade satellite and radar detection – for months at a time.

Russia’s air force has revived the Cold War-era practice of hounding U.S. warships and testing U.S. air defenses in Alaska and the North Pacific. Russia’s navy has captured Ukrainian warships in international waters, effectively annexed the Sea of Azov, gained a strategic foothold in the Mediterranean (courtesy of Syria), slipped warships into the English Channel for provocative sail-throughs, returned to the North Atlantic in force, flouted America’s exclusive economic zone off Alaska, bullied American fishing vessels out of the area and conducted large-scale operations along the edge of Alaskan waters.

The Russian navy’s actions prompted Lt. Gen. David Krumm, commander of Alaskan Command and the 11th Air Force, to conclude, “What we have to do now is be prepared to fight here and defend here.”

Moscow has not limited its military displays to land, sea and sky. In April and July of this year, Moscow conducted provocative tests of anti-satellite systems (ASAT). The April test is believed to be Russia’s ninth demo of a “direct ascent” ASAT in recent years. (Direct-ascent ASATs are ground-based or air-launched missiles.) The July test saw Russia fire an object from a satellite built to deploy ASATs.

During a similar test in 2017, Russia deployed a satellite that “launched a high-speed projectile into space,” as Space Force chief Gen. John Raymond recently revealed.

As a Canadian general at NORAD puts it, “This adversary – this competitor, Russia – has advanced on all fronts.”

Putin, like history’s other revisionist autocrats, has tried to justify his buildup and behavior by contriving external causes. His twin bogeymen are U.S. missile defense and NATO expansion.

Regarding the missile defenses America began deploying in 2004, the system was then and remains today focused on limited threats posed by Iran and North Korea. Due to both the positioning of the system’s elements and the number of Russian missiles, Russia’s massive arsenal would easily overwhelm America’s rudimentary missile defenses. Putin knows this. Moreover, it pays to recall that when Washington notified Moscow of plans to withdraw from the ABM Treaty to defend against rogue missile threats, Putin said the decision “does not pose a threat to the national security of the Russian Federation.” The U.S. system hasn’t changed, but Putin’s opinion has.

Regarding NATO expansion, the Brookings Institution’s Steven Pifer details how Mikhail Gorbachev “made clear there was no promise regarding broader enlargement” of the alliance as the Cold War thawed. Gorbachev himself concedes, “The topic of NATO expansion was not discussed at all.” Moreover, the historical record shows that in the years before Russia’s invasion of Ukraine and annexation of Crimea, NATO avoided activity in Eastern Europe. NATO didn’t even begin drawing up contingency plans for defending Estonia, Latvia and Lithuania (which joined the alliance in 2004) until after Russia’s invasion of Georgia in 2008.

Indeed, Putin’s Russia grew more aggressive even as NATO grew less concerned about deterrence. It pays to recall that before Ukraine, the alliance had carved out a special Russian place within NATO headquarters, downgraded defense spending, and pulled back or shelved deterrent military assets. For instance, the Navy’s North Atlantic-focused 2nd Fleet was deactivated in 2011. The Army’s Germany-based V Corps was deactivated in 2012. Washington withdrew every American main battle tank from Europe in 2013 – the first time since 1944 Europe had been left unprotected by U.S. heavy armor. That same year, Britain announced it would close its garrison in Germany, pulling thousands of combat troops out of Europe. And Germany busily beat its swords into plowshares. In the 1980s, West Germany deployed 2,125 tanks; by 2014, Germany had fewer than 300.

The good news, as the Russian bear flexes its muscles and sharpens its claws, is that NATO is responding.

Before Putin’s 2014 invasion of Ukraine, only three NATO members met the alliance-wide goal of investing 2 percent of GDP in defense. But after Ukraine, NATO shifted back to deterrence: 2019 marked five consecutive years of increased defense spending in Europe and Canada, NATO’s European members have added 109,000 troops to their ranks since 2015, NATO’s European and Canadian members have added $100 billion in fresh defense spending, and by 2024, two-thirds of the alliance will meet NATO’s 2-percent standard.

On the strength of these defense investments, NATO has tripled the size of its rapid-response force. NATO members have committed to deploy 30 troop battalions, 30 squadrons of aircraft and 30 warships to any European crisis zone within 30 days of a go order. NATO members are deploying air units to the Baltics to protect and monitor alliance airspace. Croatia, Hungary, Slovakia and Slovenia are establishing a Regional Special Operations Command to coordinate, train and jointly deploy commando units capable of defending against Russia’s hybrid warfare tactics, which rely on troops scrubbed of insignia to slip into foreign territory to sow confusion and direct fifth-column elements. Germany, Britain and Canada are spearheading NATO’s frontline Baltic battlegroups to deter Putin from mounting a Ukraine-style invasion.

Indeed, Russia’s invasion of Ukraine was a seminal moment for the alliance. After Ukraine, the Obama administration quadrupled funding for the defense of NATO’s easternmost members. The Trump administration tripled Obama administration funding levels for what’s known as the European Deterrence Initiative; reactivated the Navy’s 2nd Fleet; re-established the Army’s V Corps; authorized construction of and/or upgrades to bases in Iceland, Luxembourg, Norway, Slovakia, Hungary, Romania, Latvia and Estonia; returned U.S. assets to Cold War-era ports in France and Greece; approved the largest shipment of Air Force ordnance into Europe since the late 1990s; brought two new members into the NATO fold (Montenegro and North Macedonia); and strengthened NATO’s presence on the territory of its most vulnerable members.

In addition to the aforementioned Baltic battlegroups, the United States is well on its way to permanently basing some 5,500 troops in Poland. As Air Force Magazine details, the plan calls for squadrons of Air Force drones, a new Air Force “loading and unloading air base” adjacent to Wrocław-Strachowice airport, an Army forward division command, a joint combat training center, a combat aviation brigade headquarters, a combat logistics support battalion, special-operations support facilities, and an armored brigade combat team headquarters.

To be sure, today’s Russian military lacks the heft and reach of the Red Army. But Putin’s weapons and actions have gotten NATO’s attention -- and re-reminded the alliance of the importance of deterrence and readiness.

Deterrence works. Deploying sufficient military strength where it’s needed to discourage an adversary from attacking, signaling a readiness to use military force in response to attack, making clear that the costs of aggression will be higher than any potential benefits of aggression – this is what deterrence looked like during the Cold War. And this is what American presidents counseled throughout the Cold War.

Pointing to “stepped-up training and production programs,” President Harry Truman praised NATO as “an integrated international force whose object is to maintain peace through strength.”

“Our arms must be mighty,” President Dwight Eisenhower explained, “so that no potential aggressor may be tempted to risk its own destruction.”

President John Kennedy vowed to “strengthen our military power to the point where no aggressor will dare attack.”

Noting that “none of the four wars in my lifetime came about because we were too strong,” President Ronald Reagan steered Cold War 1.0 to a peaceful end by promoting “peace through strength.”

To ensure Cold War 2.0 follows a similar trajectory, NATO’s leaders need to keep that wise counsel in mind, keep their armies ready and keep an eye on Putin.