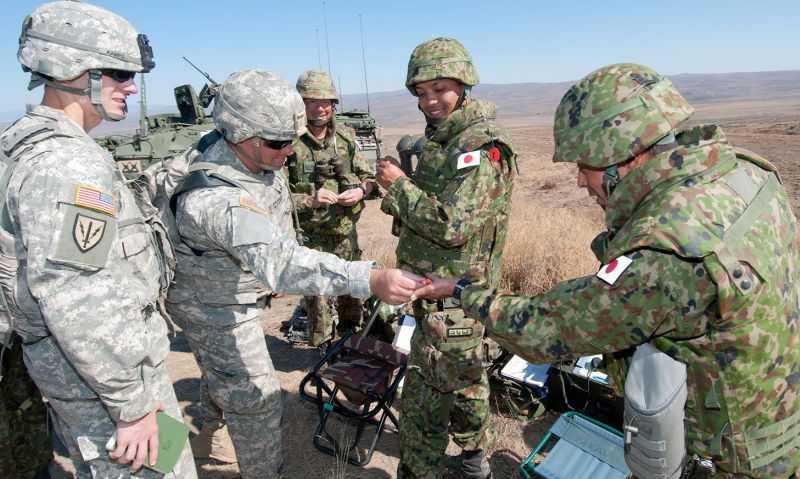 A common thread running throughout history is how groups of nations – sometimes quite disparate and disconnected – coalesce to counterbalance the emergence of a rising power and common foe: A coalition of European powers came together against Napoleonic France – and held together for about a quarter-century. The United States organized a 26-nation coalition to wage “a common struggle against savage and brutal forces” comprising the Axis. NATO was forged in response to Soviet aggression. As Princeton political scientist John Ikenberry explains, this is “one of the oldest and most enduring concepts of international relations.” And it’s happening again – this time in reaction to the People’s Republic of China (PRC).

A counter-PRC coalition seemed unlikely just a few years ago. Today, it seems inevitable. The preventable pandemic, the brutal oppression of Christians and Uighur Muslims, the South China Sea bullying, the illegal island-building campaign, the absorption of Hong Kong and intimidation of Taiwan, the bloody Himalayan border attacks, the massive military buildup, the aggressive and sometimes-racist “wolf-warrior diplomacy” – China’s own behavior has laid the groundwork for a 21st-century counterbalancing coalition. This emerging coalition is not an all-for-one-and-one-for-all fortress in the tradition of NATO. Instead, it’s somewhat like a neighborhood with different kinds of fences surrounding a common problem. The fences range in height and sturdiness depending on how neighbors perceive the threat. Some neighbors are starting to work together to fortify their fences.

While Beijing tries to annex the South and East China seas, Tokyo envisions linking the region’s waterways as “seas of freedom and of prosperity.” Just as highways need patrolmen, Tokyo recognizes that international waterways need responsible nations to enforce some semblance of order. Toward that end, Japan is expanding its naval activity in the region, conducting joint patrols with the U.S. Navy and other democratic partners, standing up island-defense units, building East China Sea military bases, upconverting its “helicopter destroyers” into full-fledged aircraft carriers capable of deploying fixed-wing F-35Bs, and constructing military-grade runways on Mageshima Island, with plans for U.S. and Japanese warplanes to operate from the base.

Spurred by Beijing’s buildup, Japan has increased defense spending annually for about a decade now. Japan is literally lending a helping hand to the U.S. military, conducting 39 asset-protection missions for U.S. warships and warplanes in 2019 and 2020. Tokyo vows to “closely cooperate” with the Pentagon in the event of a PRC attack on Taiwan. And Japan is working to bolster regional defense capabilities – expanding the transfer of military equipment and technology to Indonesia, constructing coast guard ships for Vietnam, and standing up a joint committee with the Philippines to facilitate the transfer of weapons systems.

Canberra led the effort to launch an international investigation into what Beijing did and didn’t do about COVID-19. On the security front, Australia is increasing defense spending by 40 percent this decade. The Aussies are fielding new anti-ship missile systems, anti-submarine systems, cyber-defenses and squadrons of F-35s, doubling their submarine fleet, and hosting U.S. Marines, F-22s and B-52s for extended rotations. Australia is conducting freedom-of-navigation operations (FONOPs) in and above the South China Sea. And last year Australia rejoined naval exercises enfolding the United States, Japan and India – after a 13-year hiatus.

New Delhi has increased defense spending by 49 percent the past decade. Prime Minister Narendra Modi calls for “growing defense and security cooperation” with Washington “to protect our strategic interests.” Evidence of expanding U.S.-India cooperation abounds: In 2019, U.S. Marines deployed to India. In 2020, the Nimitz carrier strike group rendezvoused with Indian warships, and the two powers signed an agreement allowing them to share sensitive satellite intelligence. Already in 2021, the U.S. defense secretary and a B-1 bomber have visited India (the first U.S. bomber deployment to India since 1945). And when COVID surged in India in April, the United States rushed supplies, equipment, and CDC and USAID teams to counter the virus.

India also is doing its part to fight the pandemic. When Beijing tried to leverage its COVID-19 vaccine to blackmail Paraguay into ending diplomatic recognition of Taiwan, Taipei turned to India to help the South American country receive vaccines free from communist coercion. India delivered Paraguay hundreds of thousands of doses of vaccine.

Not coincidentally, the United States, India, Japan and Australia have forged a vaccine partnership to deliver a billion COVID-19 vaccines globally.

These four democracies comprise the Quad – once an informal diplomatic dialogue that’s edging toward a security partnership. In March, the Quad held its first summit involving all four heads of government. Calling for a region that’s “free, open, inclusive, healthy, anchored by democratic values and unconstrained by coercion” and committing to “a free, open rules-based order, rooted in international law to advance security and prosperity and counter threats to both in the Indo-Pacific and beyond,” the target of the Quad’s joint statement was obvious.

The Quad democracies are conducting large-scale naval maneuvers, while deepening cooperation on military basing, intelligence-sharing and supply-chain resilience. Toward that end, the Quad recently launched a Critical and Emerging Technology Working Group to ensure that “critical and emerging technology is governed and operates according to shared interests and values,” “encourage cooperation on telecommunications deployment,” promote “diversification of equipment suppliers,” collaborate on “critical technology supply chains,” and cooperate on “critical and emerging technology.”

The purpose of this burgeoning partnership is not to weaponize supplies and resources, as China has done, but to allow the market to function unhindered by malign actors – and to ensure that resources are available to the free world during the next pandemic, the next trade dispute, the next financial crisis, the next war.

Britain While on the subject of telecom technology, Britain last year scrapped plans to allow Huawei – which has ties to the PRC government – to build Britain’s 5G network. Britain is rallying the D10 – an informal partnership of 10 democracies enfolding the Group of Seven industrialized democracies, plus Australia, South Korea and India – to pool their technological resources and interoperable systems to create a 5G network uncompromised by the PRC.

On the human-rights front, Britain offered some 3 million Hong Kong citizens a pathway to British citizenship in response to Beijing’s rollback of Hong Kong’s independent status. Plus, British lawmakers played a lead role in organizing the new Inter-Parliamentary Alliance on China. Comprised of senior lawmakers from America, Britain, Australia, France, Japan and other democracies, IPAC is helping its members coordinate responses to Beijing’s relentless assault on human rights and international security.

Britain also is increasingly involved in Indo-Pacific security. Britain is conducting FONOPs in the South China Sea. British forces have joined the United States, Japan and France for military exercises around Guam and Tinian. And HMS Queen Elizabeth, flagship of Britain’s newest class of aircraft carriers, steamed to the region in May on its first mission. Joined by six other British surface ships and a submarine, the carrier strike group dubbed CSG-21 is the largest Royal Navy fleet to deploy since the 1982 Falklands War.

France has joined the United States and other allies in conducting FONOPs in the South China Sea. France has sent warships through the Taiwan Strait; deployed attack submarines in the region; participated in exercises in the region with the United States, Britain, Japan, India, Australia, Japan, Malaysia and Singapore; and dispatched the Charles de Gaulle carrier group throughout the region. In addition, France recently outlined plans to strengthen military capabilities in the Indo-Pacific.

NATO and Europe In addition to the United States, Britain and France, other NATO members are making waves – and building sturdier fences – in the Indo-Pacific.

Canadian warships have been active in the South China Sea and Taiwan Strait since 2019. The Dutch navy is sailing with Britain’s CSG-21 taskforce. The German government recently vowed to “expand security and defense cooperation” with ASEAN members and will dispatch a frigate in August to join allied efforts promoting security in the Strait of Malacca and South China Sea.

On the moral-support side of the ledger, Milos Vystrcil, president of the Czech senate recently traveled to Taipei to address Taiwan’s legislature. Poignantly invoking President John Kennedy’s “I am a Berliner” speech, Vystrcil declared in Mandarin, “I’m a Taiwanese.”

In December, NATO released a report that lays the groundwork for the alliance’s most profound strategic shift since the end of the Cold War: a proposal to devote “political resources and action to the security challenges posed by China,” which the document calls “a full-spectrum systemic rival.” Noting the PRC’s “authoritarian shift” under Xi Jinping, the European Union recently concluded that Beijing’s economic system, stance on democracy and human rights, and mistreatment of other countries requires a “robust” response and closer collaboration with Washington.

After their April meetings, ASEAN leaders recommitted to “the principles of democracy and constitutional government, respect for fundamental freedoms, and the promotion and protection of human rights.” As with the Quad, ASEAN’s target is obvious. This follows ASEAN’s 2020 rebuke of Beijing for lawlessness in the South China Sea.

With China sending swarms of fishing vessels into Philippine waters, Manila reversed plans to terminate a military-training agreement with the United States. Philippine Foreign Minister Teodoro Locsin recently declared, “We need the U.S. presence in Asia.” Vietnam agrees, as underscored by the opening of its ports to U.S. aircraft carriers.

Even during the pandemic, key ASEAN members continued joint military exercises with the United States. In late 2020, Indonesian troops trained in Hawaii – and U.S. troops in Indonesia. U.S. and Thai forces trained last summer, as did Singapore and the United States last spring and winter.

Like most fences, the purpose of this patchwork of fences springing up around China is to protect territory – and draw a line. The more help, the more partners, the more fences, the better. To borrow an apt phrase from the maritime world, the China challenge is an all-hands-on-deck effort.