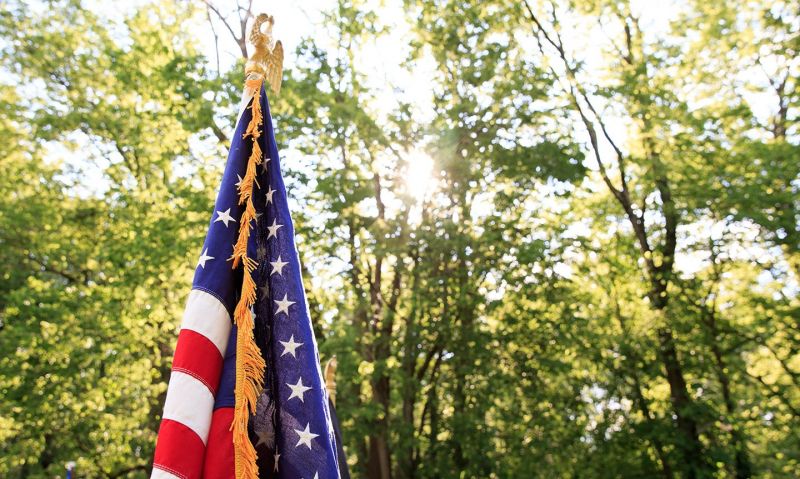 A year ago, as a simmering summer began to cool, cities across America were cleaning up toppled statues and charred U.S. flags. Thankfully, the summer of 2021 has seen less political violence, fewer flag-burners and more flag-wavers – though some of the most moving expressions of red-white-and-blue patriotism have been found in some unexpected places.

Flag wavers In what’s been called “the largest display of anti-government sentiment since 1994,” tens of thousands of Cubans took to the streets of Havana in July to protest shortages of food, medicine and vaccines – and an absolute absence of liberty. Chanting “We want freedom!” some Cubans wore T-shirts emblazoned with images of the Statue of Liberty. Some even used that other universal symbol of freedom to make their point: the U.S. flag.

Predictably, Cuba’s tyrant regime shut down communications and deployed secret police to smother the pro-freedom, anti-government protests. But the damage had already been done – and the message already sent: Cuba’s long-suffering people want to be free, and they’re using symbols of the “land of the free” to make their case.

This is anything but an isolated occurrence. It follows on the heels of equally remarkable scenes in Hong Kong, where liberty-loving people waved the U.S. flag and sang “The Star-Spangled Banner” in 2019 and 2020 to protest Beijing’s plans to crush their freedom. Xi Jinping’s henchmen went forward with the takeover of Hong Kong – in brazen violation of international treaties – but those images of Hongkongers waving our flag remain. Similar scenes can be glimpsed in the Eurasian country of Georgia, where demonstrators wave U.S. flags and burn photos of Vladimir Putin to protest Russian interference in Georgia’s political system and occupation of Georgia’s northern provinces. Ukrainians – who, like their Georgian neighbors, are trying to cope with Russian occupation while living in the crosshairs of Putin’s behemoth military – have waved the U.S. flag to signal their belief in free government and their need for America’s help.

Opponents of Venezuela’s dictatorship waved U.S. flags during a 2019 humanitarian-aid concert on the Colombian side of the Venezuela-Columbia border. In Kosovo, where there’s a Bill Clinton Boulevard in the capital Pristina, Old Glory flies freely and proudly in Pristina’s main square. “Our people were at risk of being exterminated, and it was the U.S. that stood by us,” a Kosovar lawyer told NPR in 2018, as the tiny nation celebrated its 10th birthday. “Because of America, my country exists,” a Kosovar farmer added.

Iraqi Kurds offer a different but equally powerful perspective on America: “Imagine if America didn’t exist,” a Kurdish businessman posits. “Without America, the world would be run by China or Iran. America represents freedom.”

Given America’s role in protecting Iraqi Kurdistan from Saddam Hussein’s vengeance after the Gulf War, America’s support for Kurdish autonomy after Saddam’s removal and America’s partnership with Iraqi Kurds in the fight against ISIS, it’s no wonder that U.S. flags fly from Kurdish homes, or that Kurdish shops sell the Stars and Stripes. After the ouster of Moammar Qadhafi, Libyans began waving U.S. flags at rallies, painted U.S. flags on urban cityscapes and wore the Stars and Stripes on clothing. “I fly the flag,” one Libyan man told The Los Angeles Times, “to support American-style freedoms that we all want … it stands for freedom and democracy.”

A little over a decade ago, Tanzanians waved U.S. flags in celebration of U.S. aid programs that saved millions of their countrymen and fellow Africans from malaria, AIDS and other diseases. The list goes on and on. It’s not limited to Lady Liberty and Old Glory. The musical “Hamilton,” which tells the story of America’s founding ideas, has taken Britain and Australia by storm, heads to France in 2022, is being translated into German, and will soon tour Asia.

Freedom Man Why is this? Why do they wave American flags in Havana and Hong Kong, Kosovo and Kurdistan, Tripoli and Tbilisi? Why do oppressed peoples the world over – even as American citizens torch the U.S. flag and deface war memorials and other symbols of American sacrifice – choose our flag to express their desire to be free? Why would Brits, Australians, Europeans and Asians want to see a musical that celebrates America’s birth? And why aren’t those who thirst for freedom waving Russian and Chinese flags, wearing T-shirts adorned with images of Red Square and the Great Wall, or flocking to musicals about Lenin, Mao and the czars?

The answer, as President Reagan matter-of-factly explained in his farewell address, is that America not only stands for freedom, “America is freedom.” During that same speech, Reagan shared a story that painted a portrait of this enduring truth. A sailor “hard at work on the carrier Midway” spotted “a leaky little boat” in the rough waters of the South China Sea, he began. “Crammed inside were refugees from Indochina hoping to get to America,” he recounted. “The Midway sent a small launch to bring them to the ship and safety. As the refugees made their way through the choppy seas, one spied the sailor on deck, and stood up, and called out to him. He yelled, ‘Hello, American sailor. Hello, freedom man.’”

Early on, the Declaration of Independence – with its stirring announcement that “all men are created equal” and “endowed by their Creator with certain unalienable rights … life, liberty and the pursuit of happiness” – served as an inspiring, if distant, beacon of freedom. Yet Washington, Jefferson, Hamilton, Jay and other founders anticipated a day when America would carry that light of liberty into a world darkened by despotism. Indeed, as their means grew to match their lofty ideals, the American people felt compelled to promote freedom. “The fact that many believed they could do something,” as historian Robert Kagan writes of America’s global coming-of-age amidst the 1898 war with Spain, “helped convince them they should do something.”

Thus, Americans have rescued Cubans from brutal oppression, Haitians from anarchy, Koreans, Kuwaitis, Kurds and Iraqis from tyranny, Somalis from famine, Yazidis, Libyans and Kosovars from genocide, Indonesians from natural disaster, west Africans from Ebola, and tens of millions across 60 countries from COVID-19. Americans defended free government from authoritarian states during World War I, liberated Africa, Europe and Asia from monstrous regimes during World War II, transformed Western Europe into a community of prosperity and refashioned Germany and Japan into peace-loving democracies during the Cold War, sacrificed in Vietnam and countless faraway battlefronts to contain Stalinism, built a bridge back to civilization for Afghans, and defended the frontiers of freedom.

“After defeating enemies, we did not leave behind occupying armies,” as President George W. Bush observed, “we left constitutions and parliaments.” This isn’t to suggest that America is without flaws or faults. The predictable and predicted consequences of the way America withdrew from Afghanistan are the latest evidence that America isn’t perfect. Even so, the historical record shows that America is a force for good. The Japanese learned this after their defeat, which became their liberation. Largely written by Gen. Douglas MacArthur, Japan’s postwar constitution guaranteed equal rights, labor rights, economic freedom, rule of law, free speech and religious liberty. As the devastated nation staggered toward famine, MacArthur diverted 800,000 tons of U.S. military supplies to the Japanese people, and then persuaded Washington to earmark $250 million for food and medicine for Japan – an amount, as RAND’s James Dobbins notes, “exceeding the combined budgets of the U.S. departments of Commerce, Justice and Labor.”

Germans learned that America is a great and good country after Stalin blockaded West Berlin – and President Truman responded by rescuing the city. Israelis learned the same lesson after their country was nearly overrun by marauding armies. “For generations to come,” Golda Meir declared, “all will be told of the miracle of the immense planes from the United States bringing in the material that meant life to our people.”

Iraqis and Afghans learned this lesson when America ended the nightmare regimes that deformed their nations. “One problem of Americans is that they tend to believe negative propaganda against America,” Iraqi Prime Minister Mustafa al-Kadhimi sagely observes. “Iraqis recognize that the U.S. got rid of an evil dictator and helped build a democracy.” Abdul Rahim Wardak, Afghanistan’s former defense minister of Afghanistan, adds, “Afghans have never seen you as occupiers. Unlike the Russians, who imposed a government with an alien ideology, you enabled us to write a democratic constitution and choose our own government. Unlike the Russians, who destroyed our country, you came to rebuild” – a distinction underscored even as American forces withdrew.

If only the flag-burners and memorial-defacers knew as much about America.