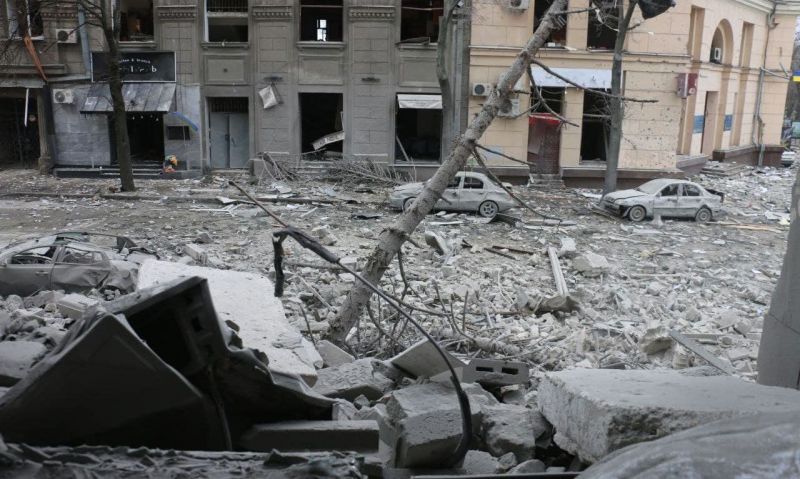 A street in downtown Kharkiv, Ukraine, is destroyed by Russian bombardment March 1.

Vladimir Putin’s invasion of Ukraine -- the largest military attack on a European country since World War II -- raises a number of questions about causes and consequences of this crisis.

How did we get here? Putin calls the collapse of the USSR “the greatest geopolitical catastrophe of the (20th) century.” The end of the USSR meant the loss of Russian control over vast territories (including the Baltics, Ukraine and Georgia), the loss of Moscow’s European buffer zone (embodied by the Warsaw Pact), and the loss of Moscow’s equal footing with great powers. As his December diktat made clear, Putin wants to reacquire as many of those trappings of Russia’s old empire as possible. NATO and an independent Ukraine stand in the way of that goal.

Putin has long been considered a mentally balanced, if ruthless, actor on the world stage. But his views on Ukraine’s sovereignty and NATO’s eastward expansion suggest that he’s drifted into fantasy.

Nor did NATO act aggressively. In fact, before Russia’s 2014 invasion of Ukraine, the alliance downgraded defense spending and shelved deterrent assets. The Navy’s North Atlantic-focused 2nd Fleet was deactivated in 2011. The Army’s Germany-based V Corps was deactivated in 2012. Washington withdrew every U.S. tank from Europe in 2013. That same year, Britain began shutting down its garrison in Germany. By 2014, Germany fielded just 300 tanks, down from 2,125 in the 1980s. Despite all that, Putin demanded in December that NATO close its open door, rewind history, and effectively turn Central Europe and the Baltics into a neutral zone.

In an effort to delegitimize his neighbor, Putin began calling Ukraine “Novorossiya,” a czarist-era term for Ukraine’s Russian-speaking regions. He complained that the collapse of the USSR meant “Russian territories with a historically Russian population, primarily in Ukraine, had found themselves living outside Russia,” calling Ukraine “an integral part of our own history, culture.” He also claimed Nazis control Ukraine’s government, and accused Ukraine of building “an anti-Russia” and “stockpiling the latest weapons … imagine how Russia must live.”

Putin’s claims would be laughable if cities weren’t burning because of his alternate history.

Ukraine was independent after World War I. Its sovereignty has been internationally recognized since 1991. Ukraine’s president, Volodymyr Zelensky, is Jewish; his grandfather fought the Nazi invasion of Ukraine.

As for Ukraine being a threat to Russia, it was Russia that invaded Ukraine in 2014 and 2022. Russia has a population of 145 million, 1.4 million men under arms, a $61.7 billion military budget and 4,500 nuclear warheads. Ukraine has a population of 44 million, less than 300,000 troops, a $5.9 billion defense budget and zero nuclear weapons. In fact, Ukraine surrendered its nuclear arsenal in exchange for a commitment from Russia to “refrain from the threat or use of force” and respect Ukraine’s “sovereignty” and “existing borders.” That’s a reminder that Putin -- like his Soviet predecessors, like Hitler -- doesn’t keep his word.

Ukraine’s real sin against Putin was daring to throw off pro-Putin leaders, choose democratic government, and turn to Western institutions. “Putin has started a war of aggression in cold blood for one reason,” German Chancellor Olaf Scholz explains. “The freedom of the Ukrainian people calls his own oppressive regime into question.”

What is NATO’s role? Ukraine is not a member of NATO, which explains why the alliance didn’t directly intervene to defend Ukraine this year or in 2014. This is a harsh reminder that there are limits to NATO’s reach and role today, just as there were when Moscow sent tanks to crush Hungary in 1956 and Czechoslovakia in 1968.

While Ukraine falls outside NATO’s mandate, the principles at stake in Putin’s war -- the sovereignty of Europe’s nations and what NATO’s founding document calls the “stability and … security of the North Atlantic area” -- definitely do not. That explains NATO’s long-overdue recommitment to deterrence.

NATO is a defensive alliance designed to deter war, not wage it. If Putin is not convinced that NATO’s all-for-one defense guarantee applies to every member, he will attempt in the Baltics or Poland what he has done in Ukraine. That would force NATO to blink or fire back. Both options are terrible. One leads to a NATO-Russia war, the other to the unraveling of NATO -- and with it, the entire global security architecture.

To avoid those outcomes, the United States has deployed bomber and fighter aircraft to Britain, Germany, Poland, Estonia and Romania; attack helicopters to the Baltics and Poland; 7,000 soldiers to Germany; and thousands of troops to Poland, 800 to the Baltics, and hundreds more to Hungary, Bulgaria and Romania. In addition, Washington has approved a long-delayed sale of 250 M1A2 tanks to Poland, and surged USS Harry S. Truman to join Italian and French carriers in the northern Mediterranean.

In a stunning reversal, Germany announced it is increasing defense spending to 2% of GDP, something NATO has been begging Berlin to do since 2006. Germany also unveiled a massive $112.7 billion rearmament fund.

Berlin’s extraordinary 180 is an early indication that most NATO nations will increase defense spending. In addition, NATO will likely expand, perhaps by year’s end. Momentum for NATO membership has been building in Finland and Sweden. The invasion of Ukraine has added fuel to those efforts.

What does the future hold for Ukraine? The United States has shipped antitank systems, Stinger antiaircraft missiles and grenade launchers to Ukraine. Britain has delivered antitank missiles. Poland and the Balts have sent antiaircraft and antitank weapons. Turkey has delivered UCAVs. Germany -- in yet another stunning reversal -- is rushing 1,000 antitank weapons and 500 Stingers. All told, 28 countries are shipping military and humanitarian aid to Ukraine.

DefenseNews reports Ukraine is disseminating those weapons to 209,000 active-duty personnel, 60,000 National Guardsmen, a Territorial Defense Force of several thousand and an army of citizen-soldiers numbering into the hundreds of thousands. In addition, thousands of volunteers are flowing into Ukraine to serve in the just-formed International Legion of the Ukrainian Army.

These weapons and volunteers may not be enough to preserve Ukraine. With tens of thousands of Russian troops within its borders, Ukraine is not only maimed but badly mismatched. Ukraine’s Churchillian leader and courageous people have proven themselves to be tenacious warriors, earning NATO’s admiration -- and if they survive the hell Putin has unleashed, a seat at NATO’s table. But Putin’s ruthlessness -- and Russia's sheer mass -- will likely overwhelm Ukraine, especially as Putin targets civilians and employs the beastly scorched-earth tactics he refined in Chechnya and Syria.

Yet even if Kiev falls, there’s every indication weapons will keep flowing into a Putin-occupied Ukraine. Congress is working on a $6.4 billion aid package. NATO is delivering weapons overland. Arms shipments are flowing to the Poland-Ukraine border. And the Army’s 18th Airborne Corps is working with allies to establish an “international donor coordination center” to deliver weapons.

Will sanctions have an impact? The United States, Britain, Canada, the EU and Japan disconnected Russian banks from SWIFT, the global system that enables financial transfers between banks. Those same partners lobbed heavy sanctions against Russia’s largest financial institutions, targeted sanctions against Putin and named Russian oligarchs, and export-control measures to block access to high-tech products.

This barrage of financial counterstrikes sent the Russian ruble crashing to its lowest-ever exchange rate, triggered a run on Russia’s banks and made Russia’s stock market “un-investable.”

In addition, the United States, Britain, the EU and Canada closed their airspace to Russian aircraft. Russian cargo ships have been seized. And multinational firms and associations have piled on: BP, Shell, American Airlines and Maersk have withdrawn from multi-billion partnerships with Russian firms. Apple suspended sales in, and exports to, Russia. Facebook blocked access to Russian propaganda platforms. Disney, Paramount, Universal and other studios suspended movie releases in Russia. The NHL, FIFA and F1 cut ties with Russia.

As Gen. Martin Dempsey, former Joint Chiefs chairman, observes, Washington must view “energy as an instrument of national power.” But this would require a dramatic shift in the administration’s drive for green energy and pursuit of climate-change goals.

Will the war have an impact elsewhere? Putin’s criminal invasion of Ukraine and the consequences flowing from it -- the human and economic costs, the geopolitical fallout, the security ramifications -- offer a glimpse of what lies ahead if Xi Jinping tries to take Taiwan.

Xi must be made to understand that attempting in Taiwan what Putin has done in Ukraine will lead not to victory parades and an ascendant legacy, but to his soldiers in body bags, his military machinery in tatters, his regime reduced to pariah status.

Indeed, Ukraine’s defenders have shown Taipei and Beijing how a small nation with the right mix of weapons can hobble a full-spectrum military power -- and how a citizenry and political leadership adept at leveraging technology can win a global information war.

Once thought to have a mastery of misinformation, Russia lost the information war in the first hours of the invasion. Ukrainians have tweeted texts from confused Russian conscripts trying to make sense of an invasion they knew nothing about, viralized gun-camera footage of drones blasting Russian convoys, livestreamed video of dazed Russian POWs and abandoned Russian tanks, publicized Russian casualty figures, produced YouTube clips of a mythic Ukrainian pilot purportedly now an ace, weaponized cellphone photos of Russian atrocities, and, of course, juxtaposed the unscripted images of Zelensky defending Kiev shoulder-to-shoulder with his countrymen against choreographed scenes of a paranoid Putin figuratively and literally isolated.

What’s the future hold for Putin?

Whether Putin wins or loses Ukraine’s territory, he has lost the war beyond Ukraine. Putin has catastrophically underestimated his enemies, overestimated his military, self-sabotaged his geopolitical position, revitalized NATO and corroded his rule.

What’s likely more troubling for Putin is the cascade of economic and geopolitical consequences triggered by his war.

As noted, the economic costs for Putin’s subjects and crony kleptocrats may prove incalculable. Russia faces a level of international isolation beyond anything the USSR -- with its bloc of satellites -- ever endured. It seems unlikely Russia will be brought in from the cold until Putin’s gone.

Michael McFaul, former U.S. ambassador to Russia, believes the invasion of Ukraine “marks the beginning of the end of Putin's dictatorship.” Russia’s people, oligarchs or army could hasten that end. There have been antiwar protests in Russia. Some oligarchs have publicly opposed Putin’s war. But the oligarchs’ words have no real impact on Putin. The people's protests aren’t large enough to topple Putin. And whether the oligarchs or the people move against Putin, they will need the generals.

Alan W. Dowd is a senior fellow with the Sagamore Institute. He writes the Landing Zone column at legion.org/landingzone.