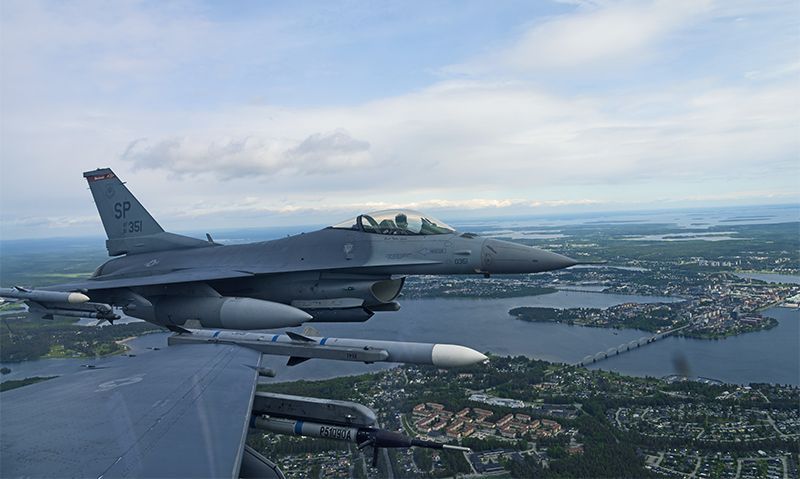 Sweden recently hosted – and contributed heavily to – Exercise Arctic Challenge. One of the largest air-power exercises in Europe, Arctic Challenge 21 brought together warplanes from the United States, Sweden, Finland, Denmark, Germany, the Netherlands and Britain for the full range of air-defense, close air support, air-defense suppression and air-to-ground strike training – all in the cold-weather environment of Sweden’s Arctic skies.

This is just the latest example of Sweden’s expanding contribution to international security and deepening partnership with the United States and the rest of NATO. With Russia on the march, Sweden’s emergence as a strong security partner is a welcome development.

Make no mistake: Sweden – officially and stubbornly neutral for two centuries – is edging toward the U.S.-NATO security umbrella because of Russia’s actions. Citing Russia’s attacks on neighboring nations and its rapid military buildup, the Swedish government has reintroduced military conscription, approved a whopping 40 percent increase in defense spending (Sweden’s largest defense-spending increase in 70 years), unveiled a security doctrine known as “Total Defense,” and deployed troops to Gotland, a Swedish island in the Baltic Sea. (Gotland would be key to any NATO effort aimed at reinforcing or retaking Estonia, Latvia or Lithuania – NATO members all.)

The additional defense spending will increase the size of Sweden’s military by 67 percent, reorganize the army into mechanized brigades, add new air-defense systems to Swedish warships, expand the size of the navy and deploy a new next-generation fighter-bomber.

Defense Minister Peter Hultquist bluntly explains that the beefed-up defense budget is needed “because of the new security situation with Russian aggression toward Georgia, annexation of Crimea, the conflict in Ukraine, activities in Belarus, upgrading of Russian military capability, very complex exercises, activity in the Arctic and in the Baltic Sea area.”

Sweden’s Total Defense security doctrine is a whole-of-society approach that calls on every citizen, business and neighborhood to be ready to resist invasion, with or without direction from the central government. The Total Defense program features a “buildup of civil defense,” enhanced cyber-security, increased investment in the military, and empowerment of each and every Swedish citizen – civilian or uniformed – to play a part in defending their nation. As part of the Total Defense initiative, Sweden has disseminated information to every household informing citizens what to do in the event of a military attack. The pamphlet is ominously titled “If Crisis or War Comes.” As UPI reports, the document provides information on securing food and water and the location of bomb shelters. “The world around us has changed,” the document concludes, citing “threats to our security and independence.”

The goal of the effort, as The Wall Street Journal explains, is “to equip citizens and companies to fend for themselves in crises.”

The Total Defense doctrine is aimed squarely at the kind of “gray zone” hybrid warfare Russia has conducted so effectively in Ukraine – warfare that employs disinformation, psychological operations, cyberattacks, troops scrubbed of insignia, fifth-column groups and the like to paralyze an enemy, confuse political-military authorities, and secure key objectives before a defense can be mounted. Keen to Moscow’s methods, the Swedish government has disseminated materials to all citizens making clear that “If Sweden is attacked by another country, we will never give up … All information to the effect that resistance is to cease is false.”

To its credit, Sweden is not just hunkering down behind its icy borderlands. Ever since Russia’s 2014 invasion of Ukraine, the Swedish military has been expanding cooperation with the United States and other NATO members.

In 2016, a package of B-2s and B-52s conducted simultaneous, nonstop flights from the continental United States to the North Sea, Baltic Sea, the North Pole, Alaska and the Pacific Ocean. Swedish fighter-jets participated in the exercise, dubbed “Polar Roar.” According to the Air Force, Polar Roar “demonstrates the ability of the U.S. bomber force to provide a flexible and vigilant long-range global-strike capability and provides unique and valuable opportunities to train and integrate with allies and partners” – like Sweden.

In 2017, more than 20,000 Swedish and U.S. troops participated in Exercise Aurora, the largest military exercise in Sweden in decades. U.S. commanders know that Sweden's Ranger Battalions – which specialize in cold-weather operations – have much to offer U.S. personnel when it comes to understanding operations in the Arctic, where Russia is making provocative military moves.

In 2018, Marines deployed to Sweden for joint exercises designed to hone the ability of both nations to conduct amphibious raids from Baltic waters – a skill that could prove vital in the event of a Russian invasion of Estonia, Latvia or Lithuania.

In 2019, hundreds of troops from Sweden, Canada, France, Norway and Finland participated in exercises in northern Canada focused on setting up logistics nodes and carving landing strips out of the Arctic ice.

In late 2020, Swedish and U.S. warships, Swedish JAS-39 fighter-bombers, and U.S. F-15E fighter-bombers carried out “simulated surface combat” and “simulated long-range, deep-land strikes” in and above the Baltic Sea, as Naval News reports. (It’s worth adding that for years the U.S. Navy has tested itself against Sweden’s world-class submarines.) This flurry of activity was capped off by the aforementioned Arctic Challenge maneuvers this year, which were centered around bases in Sweden, Norway and Finland.

These exercises and training ops are really just the tip of the iceberg when it comes to Sweden’s contributions to transatlantic security.

The Swedish military works closely with neighboring Norway and Denmark on security in and around the Arctic. Moreover, Sweden has been a key military contributor to NATO combat missions in Bosnia, Kosovo, Afghanistan and Libya, as well as NATO’s training mission in Iraq. In fact, Sweden deployed more troops to the NATO-led counterinsurgency and peacekeeping mission in Afghanistan than Belgium, the Netherlands, Norway and Portugal (all founding members of the NATO alliance).

Given that resumé, it would be fair to conclude that Sweden is a member of the NATO alliance, and an active one at that. But it’s not – at least not yet. Sweden is officially non-aligned. However, Sweden is one of just six non-NATO countries considered as “enhanced opportunity partners.” It is treated like a de facto member of NATO, as underscored by its cooperation with and contributions to NATO missions. And there are growing indications that Sweden could soon become NATO’s 31st member. In December 2020, a sizable majority in the Swedish parliament voted for the so-called “NATO option” – a kind of first step toward NATO membership – and called on the government to “express readiness to join NATO as a possible security policy option,” according to an AP report. National polls reveal a dramatic change in public opinion on NATO membership: In the 1990s, just 15 percent of Swedes supported joining the alliance; today, support for NATO membership and opposition to NATO membership are evenly divided.

For a country that was steadfastly, even defiantly, neutral throughout the Cold War and into the post-Cold War era, this is a stunning turnabout – and a striking indication of how serious Swedes perceive the threat from Putin’s Russia.

If – or perhaps more accurately, when – Sweden joins NATO, the alliance will gain a strong and committed ally that contributes to security rather than free-riding on others. America will gain a stalwart friend ready and willing to export stability well beyond Europe. And Putin and his generals will gain another headache.