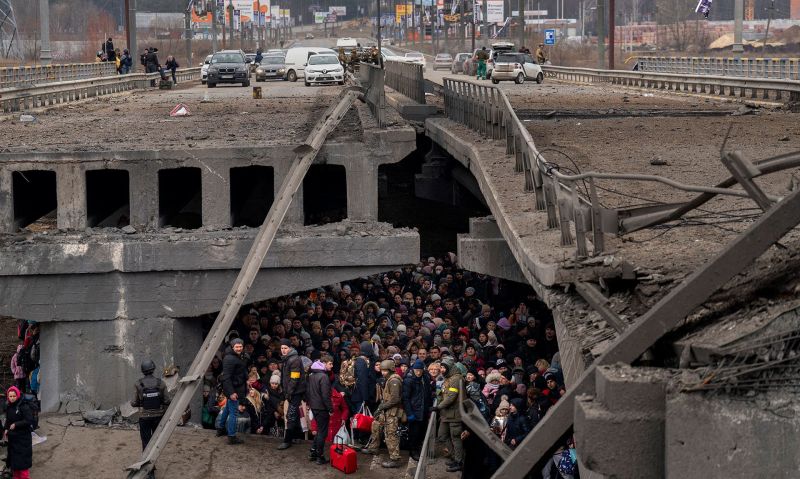 Ukrainian civilians and soldiers take shelter under a bridge in Kyiv.

With as many as 15,000 Russian troops dead, 30,000 Russian troops wounded or captured, 1,308 Russian tanks/armored vehicles destroyed, damaged or captured, and 79 Russian aircraft destroyed, Ukraine has won the Battle of Kiev and staggered Vladimir Putin’s vaunted military. Even so, Putin has the capacity and callousness to keep bludgeoning Ukraine’s cities – and Ukraine has the will and weaponry (thanks to NATO) to keep bleeding Russia’s army.

Yet at some point, this war will end. Let’s stipulate that peace talks yield a free and independent Ukraine along the lines of what it was before Russia’s invasion, with Crimea and a chunk of eastern Ukraine under Russian control. The next crucial step will be for the free world to help Ukraine ensure that Putin is never again tempted to repeat the mistake he made Feb. 24, 2022.

Reconstruction – likely to cost deep into the hundreds of billions – will be a key part of the effort to fend off another Russian invasion. As other post-conflict examples remind us, hollowed-out cities and broken infrastructure corrode nation-states from within, invite foreign interference (something Putin has illustrated time and again), and serve as breeding grounds for a host of transnational pathologies (human trafficking, drug smuggling, terrorism).

A modern-day Marshall Plan – led by the European Union, with support from the United States, Britain, Canada, Turkey, Israel, Australia, Japan and others – can prevent that outcome by rebuilding what Putin’s war of war crimes has destroyed. These donor nations would underwrite some of the costs of reconstruction, but ideally most of the costs of Ukraine’s reconstruction should come from Russian assets. The Stockholm Free World Forum’s Anders Aslund argues that conversion of Russia’s frozen currency reserves – amounting to some $400 billion – into reparations payments is “entirely possible” through national legislation in countries where reserves are held “on the grounds that Putin is committing crimes against humanity and the crime of aggression.”

Postwar Ukraine will require two distinct lines of effort with regard to security and stability.

First and foremost, responsible parties will need to muster a peacekeeping force tasked with monitoring the Ukraine-Russia and Ukraine-Belarus frontiers, regions where Ukrainian and Russian forces might be in close proximity, and Ukraine’s territorial waters.

Given Russia’s actions, it’s difficult (though not impossible) to see how such a force could be administered by the U.N. Security Council. And given sensitivities on both sides of the NATO-Russia divide, it’s unlikely that NATO could replicate in Ukraine its role leading the Implementation Force (IFOR), the Multinational Stabilization Force (SFOR) and the Kosovo Force (KFOR) in the former Yugoslavia. An alternative model is the Multinational Force and Observers (MFO) peacekeeping mission, which has been deployed in the Sinai since 1981. The MFO is funded by a group of donor nations and manned and supplied by a group of troop-contributing nations. In a similar way, Ukraine could invite trusted partners to contribute personnel, material and funding to this effort. The Organization for Security and Cooperation in Europe (OSCE) – with a track record of border-management and a membership enfolding the entire Euro-Atlantic region – could play a coordinative role. Owing to their unique capabilities, certain NATO members (though not NATO itself) would be needed to provide enabling support.

Second, the devastation wrought by Putin will likely require some sort of force focused on stabilization and security inside Ukraine. This constabulary force would work with Ukrainian national and regional authorities, augment Ukrainian municipal authorities, and even stand in for municipal authorities wiped out by Putin’s war – all with the aim of providing stability, security and civil order during the reconstruction process. This would be no small task, but EU organs have played a similar role in Bosnia and Kosovo, as has the OSCE.

Importantly, as a developed nation, a cohesive nation, a nation committed to democratic governance, postwar Ukraine will not be like postwar Bosnia, Libya, Iraq or Afghanistan – places that were broken not because of foreign intervention, but rather were so broken that they invited foreign intervention. Ukraine, on the other hand, is more united and more cohesive today than it was before Putin launched his war. That reality will promote internal stability, which will enhance and accelerate any reconstruction effort.

As important as reconstruction and internal security are to Ukraine’s future, external security and defense are arguably more critical. After all, Putin has annexed part of Ukraine, desires to absorb the whole of Ukraine, has laid siege to Ukraine and is certain to menace postwar Ukraine. In short, Putin’s Russia represents an existential threat to Ukraine. Deterring and defending against this threat will be the overarching national-security priority for Ukraine as long as Putin and those who want to reconstitute the Russian Empire control the Kremlin.

In his December diktat, Putin demanded Ukraine’s demilitarization and Volodymyr Zelensky’s removal. When Ukraine rejected those demands, Putin ordered his invasion, expecting a lightning two-day war, collapse of Ukrainian defenses and swift installation of a puppet regime. None of this has come to pass. The core reasons why: the Ukrainian people’s ferocious defense of their democracy, the Ukrainian military’s tailored military capabilities and the supply arteries that have pumped aid into Ukraine. These core reasons for Ukraine’s wartime success provide a roadmap for Ukraine’s postwar defense posture.

Ukraine’s commitment to democracy and democratic principles will sustain both internal cohesion and external support over the long haul.

Alexis de Tocqueville noted that citizens in democracies are generally not inclined toward war because they are focused on “their peaceful occupations.” But once they are impacted by war, “the same passions that made them attach so much importance to the maintenance of peace will be turned to arms.” For democratic nations, war and security are thus transformed from affairs of state into all-encompassing national movements. The United States experienced such a transformation after Pearl Harbor – a transformation that continued to shape America throughout the Cold War. Something similar – though more visceral given that this war has been waged in Ukraine – has happened among Ukrainians. Postwar Ukraine’s democracy – because of shared sacrifice and shared understanding of the existential threat posed by Putin – will be well-suited to sustain its own “long twilight struggle” against Moscow.

Postwar Ukraine’s security posture will be tailored to its unique situation and indeed will be unique among European nations. After all, the vast majority of European nations derive their security from membership in NATO. Ukraine won’t be joining NATO anytime soon, if ever. The Ukrainian government has even conceded this. However, by working closely with key partners and drawing lessons from well-armed neutrals, Ukraine can carve its own path to security.

It’s obvious Ukraine won’t be demilitarized. Quite the contrary, Ukraine will become a fortress, adopting a bristly self-defense posture akin to that of Israel and Sweden.

The bad news is that Ukraine, like Israel after the 1967 and 1973 wars, is butted up against a bitterly hostile and well-armed foe. The good news is that postwar Ukraine will not be as isolated as the Israel of 1967 or 1973. Although postwar Ukraine will be neutral in name, it will have close security ties with neighboring democracies. Here’s where Sweden – a muscular neutral with EU membership and a thick thatch of security ties to the United States – offers a parallel. Postwar Ukraine will surely have a security partnership with the United States (more on that below); it already has a pathway to EU membership. While it’s not the equivalent of NATO’s Article V, EU membership ensures that if a member is subjected to “armed aggression on its territory,” other EU members have an “obligation of aid and assistance by all the means in their power.”

That will be important for postwar Ukraine. Yet we can expect Ukraine, like Israel, to pursue additional security options. Recall that in 1994, Ukraine surrendered its nuclear arsenal in exchange for a commitment from Russia to “refrain from the threat or use of force” and respect Ukraine’s “independence … sovereignty and the existing borders.” That agreement, known as the Budapest Memorandum, was signed by the United States, Britain and Russia. Although it didn’t require the United States or Britain to come to Ukraine’s defense, it did commit all parties “to seek immediate United Nations Security Council action to provide assistance to Ukraine” in the event of attack. Of course, as a member of the Security Council, Russia could block such “action.” Since the Budapest Memorandum failed to shield Ukraine from attack, it’s understandable why Ukrainian negotiators at the peace talks have proposed what they call “fortified neutrality” within “an international mechanism of security” enfolding the United States, Britain, France, Turkey, Poland and other trusted partners.

Given America’s inward-looking posture, that may be a heavy lift for the Biden administration. But Washington could elevate Ukraine to the status of “major non-NATO ally” – a designation Argentina, Bahrain, Egypt, Israel, Jordan, Kuwait, Morocco, Taiwan and others enjoy. This designation wouldn’t tie the United States to a mutual-defense treaty, but it would send a strong signal to Moscow and deepen U.S.-Ukraine defense cooperation.

Fortress Ukraine may not get a seat at NATO’s table, but it will have many benefactors from NATO and the rest of the free world, as we have seen during the war.

Supply arteries have sustained Ukraine’s war effort and democracy. With NATO reawakened to the threat on its doorstep, the alliance appears primed to become a 21st-century “arsenal of democracy” for Ukraine. Given that four NATO/EU members border Ukraine, NATO and the EU are positioned to transform wartime weapons-delivery efforts into a long-term postwar rearmament program. As British Prime Minister Boris Johnson concludes, Ukraine’s security partners will need to focus on “strengthening the quills of the Ukrainian porcupine as to make it … indigestible to the Russian invaders.”

Toward that end, Fortress Ukraine will need Stinger (U.S.), Starstreak (Britain), Patriot (U.S.), S-300 (Slovakia) and Iron Dome (Israel) air-defense systems; Predator (U.S.), Switchblade (U.S.) and TB2 (Turkey) ground-attack drones; MiG-29s (which Slovakia and Poland have and Ukrainian pilots are trained to fly), AV-8B Harriers (which have vertical-takeoff capability and which the Marine Corps is in the process of replacing with F-35Bs) and tank-killing A-10s (which the  Air Force is trying to retire); NLAW (Britain and Sweden), Matador (Germany) and Javelin (U.S.) antitank systems; T-72 tanks (which the Czechs are already sending) and PT-91 tanks (which Poland is replacing with M1A2s); counter-artillery systems (Germany); armored vehicles (which Britain and Australia are already sending); coastal defenses (Britain, Sweden); border-surveillance systems (ROK); anti-tank mines (ROK, U.S.); cyber-defenses (NATO); and real-time intelligence (U.S., Britain, Poland, Turkey). As Putin shifts his focus and forces to eastern Ukraine, these weapons should start flowing immediately to help the Ukrainians hold and reclaim as much of their territory as militarily possible.

Acquisition of these defensive systems – and requisite training – should be well-publicized, with an eye toward deterring Putin. Doubtless, Putin and his generals – those who haven’t been fired or killed – are already plotting, like Egypt’s high command after the 1967 debacle, how to finish what they started. Indeed, if Ukraine wants a glimpse of its future, it should look to Israel – always prepared for and bracing for the next war.

Contemplating a postwar Fortress Ukraine may seem premature as bombs fall on Ukraine’s cities. But Zelensky is already thinking in these terms, concluding recently that Ukraine will need to “become a big Israel.” It’s a grim, costly and sober existence. But it’s preferable to the alternatives.